Druggable is as Druggable Does; Or a Million Ways to use NMR

As we all know, the closure of sites is a bad thing for those of us in Pharma.  One very small silver lining is that this frees up a lot of very nice work to be published.  The former BI site in Laval has been closed for a year and we are still seeing great papers coming out.  In this one in JMed Chem,  LaPlante and co-workers tell us about their fragment efforts against HCV helicase.

HCV has recently had drugs approved for its treatment, but as with any virus, different modes of treatment are important.  The ATP-dependent helicase activity is found in the C-terminal 2/3 of the NS3 protein. Helicase activity is straight forward to measure and there has been some success in terms of non-viral specific inhibitors.  The inhibitors found to date have been found to act through undesireable mechanisms, but with a wealth of structural information there is no reason why helicase is inherently undruggable.  With this information in hand, they decided to target site 3+4 (green sticks are DNA from the structure), near the most conserved residue W501.  The ATP-binding site is 1+2 for reference. 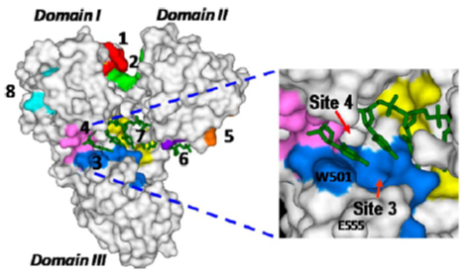 Their first approach was to screen the 1,000,000+ corporate compound collection.  As you would expect for a paper blogged about here, they failed to find anything interesting (all the inhibitors worked by undesireable modes).  So, on to the FBDD campaign, to save the day once more.  The used a "shotgun" approach with their fragment screen: 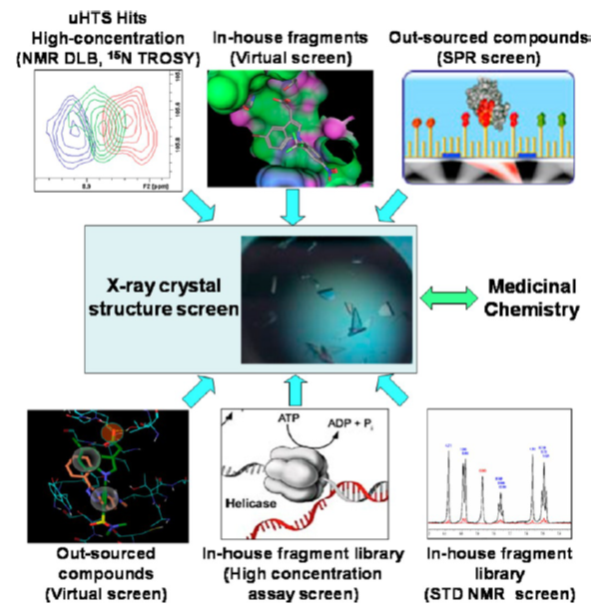 One source of compounds came from an earlier HTS where they rejected fragment-like molecules for lack of potency, additional HCS screening of in house fragment collection, commercial fragments were screened in an SPR assay, virtual screening, and NMR.  They had a stringent workflow aimed at producing quality compounds for X-ray.  [The in-house fragment collection was 1000 compounds.]  This, along with NMR, validated ligands that bound to site 3+4.  They note one particularly noteworthy problem: high false positive rates due to the high ligand concentrations needed for the assays.  This lead to aggregation, solubility, and promiscuity.  This lead them to implement specific assays designed to eliminate these compounds (two NMR papers published in 2013, ref 18).

They then clustered the best hits into 9 chemotypes: 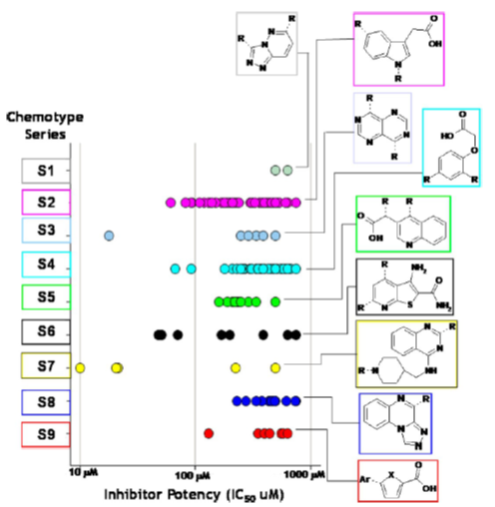 They used an "Analog by Catalog" approach and soaked or co-crytallized the best compounds into crystals.  S6, S7, and S9 were not found to bind to helicase in the crystallization trials and were deprioritized.  S5 was found at Site 3+4, but also others.  S1-4, and S8 were found to bind solely to site 3+4 (12 examples shown overlain). The key feature of this is the compounds are centralized in a wide groove over W501.  The topology of the binding site (wide groove and small lipophilic pocket) meant that optimizing for potency could be challenging. 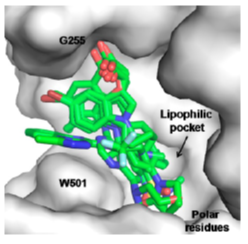 was found from an STD-NMR screen of 3 fragment per sample (300 uM fragment and 3.5 uM helicase).  They then, much to my heart's delight, they reached into the NMR cabinet for line broadening and competition experiments confirming it binds in site 3+4.  X-ray confirmed the binding mode, but potency was not improved with chemistry.  So back into the NMR cabinet they went: a methyl resonance assay,

15N TROSY showing peaks shifting upon addition of a derivative of 1, and 19F NMR!  OMG, how awesome is this?


In terms of the chemistry, removing the Br does not change the potency, but did change the orientation of the compound in the binding site.  Further elaboration led to this compound 19 (3 uM and 0.23 LE): 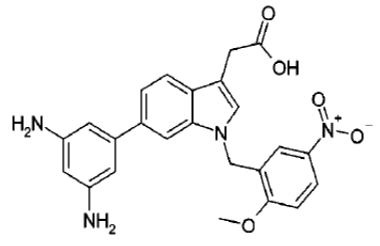 It contains a nitro group, think what you may.  In order to confirm the binding affinity of the compound without immobilizing protein, they used the methyl resonances to do the titrations.  The two separate peaks they followed gave values of 32 and 28 uM (+/- 8).  Given the broadness of these peaks, I think this is a pretty decent assay, although it is an order of magnitude different than the biochemical Kd.  However, subsequent structural studies revealed that there is significant structural dynamic differences between pH 6.5 and 7.5.  ITC gave the same number (33 uM and enthalpy driven); however, the ITC had to be run at high compound concentration and a different pH.  They then went off the deep end and decided to use CD (I can't link to a previous post of using CD because we have never had a post where someone used it).  With a horrible assay (don't even get me started on near-UV CD as a readout of tertiary structure), they got reasonably close to the Kds determined by ITC and methyl-NMR.

This is a very nice example of not being afraid of a target and using all available tools to advance hits against it.  It also shows the WIDE range of NMR experiments that can be used and that are easy and practical.  In terms of full disclosure, Steven LaPlante is a FOT (Friend of Teddy) and I have been working with him.
Posted by Dr. Teddy Z at 7:47 AM