How weak is too weak for PPIs?

Ben Perry brought up an interesting question in a comment to a recent post about fragments that bind at a protein-protein interface: “At what level of binding potency does one accept that there may not be any functional consequence?” I suspect the answer will vary in part based on the difficulty and importance of the target, and many protein-protein interactions (PPIs) rank high on both counts. In a recent (and open-access!) paper in ACS Med. Chem. Lett., Alessio Ciulli and collaborators at the University of Dundee, the University of Cambridge, and the University of Coimbra (Portugal) ask how far NMR can be pushed to find weak fragments.

The researchers started with a low micromolar inhibitor of the interaction between the von Hippel-Lindau protein and the alpha subunit of hypoxia-inducible factor 1 (pVHL:HIF-1α), an interaction important in cellular oxygen sensing. The team had previously deconstructed this molecule into component fragments, but they were unable to detect binding of the smallest fragments.

In the new study, the researchers again deconstructed the inhibitor into differently sized fragments and used three ligand-detected NMR techniques (STD, CPMG, and WaterLOGSY) to try to identify binders. As before, under standard conditions of 1 mM ligand and 10 µM protein, none of the smallest fragments were detected. However, by maintaining ligand concentration and increasing the protein concentration to 40 µM (to increase the fraction of bound ligand) or increasing concentrations of both protein (to 30 µM) and ligand (to 3 mM), the researchers were able to detect binding of fragments that adhere to the rule of three. 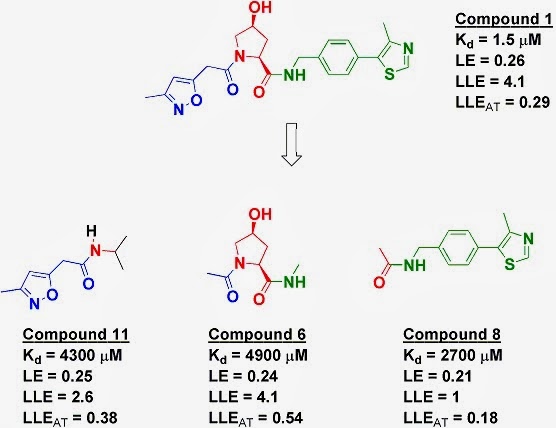 Of course, at these high concentrations, the potential for artifacts also increases, but the researchers were able to verify binding by isothermal titration calorimetry (ITC) and competition with a high-affinity peptide. They were also able to use STD data to show which regions of fragments bind to the protein, suggesting that the fragments bind similarly on their own as they do in the parent molecule. (Note that this is in contrast to a deconstruction study on a different PPI.) Even more impressively for a large (42 kDa) protein, the researchers were able to use 2-dimensional NMR (1H-15N HSQC) to confirm the binding sites.

Last year we highlighted a study that deconstructed an inhibitor of the p53/MDM2 interaction. In that case, the researchers were only able to find super-sized fragments, and they argued that for PPIs the rule of three should be relaxed. The current paper is a nice illustration that very small, weak fragments can in fact be detected for PPIs, though you may need to push your biophysical techniques to the limit.

But back to the original question of how weak is too weak. With Kd values from 2.7-4.9 mM, these are truly feeble fragments. Nonetheless, they could in theory have been viable starting points had they been found prospectively. That assumes, though, that these fragments would have been recognized as useful and properly prioritized. The ligand efficiencies (LE) of all the fragments, while not great, are not beyond the pale for PPIs. Previous research had suggested that much of the overall binding affinity in compound 1 comes from the hydroxyproline fragment (compound 6, which was originally derived from the natural substrate). Not discussed in the paper, but perhaps more significantly, the LLE (LipE) and LLEAT values are best for compound 6, which despite having the lowest affinity is the only compound that could be crystallographically characterized bound to the protein. In the Great Debate over metrics, this suggests that LLE and LLEAT may be more useful than simple LE for comparing very weak fragments.
Posted by Dan Erlanson at 6:36 AM

I think it's a bit more insidious than simply asking "how potent does binding need to be to see functional activity". The question truly is "will any molecule that binds to this binding site have functional consequences"? The answer is often "no", leading to months-long optimization campaigns that lead to great binders with do nothing (that can be detected) useful. All the while, the chemists and biologists "discuss" the reasons . . .

I doubt that the fragments bind similarly on their own as they do in the parent molecule because of the following thermodynamic argument. If we translate the Kds into kcal/mol, sum them and translate the sum again into a Kd we arrive at 0.062 microM or 25 times better than the observed 1.5 microM. If the linking were perfect the Kd for the mother compound should even be at least 1000 times better, thus sub nM, because of paying a lower entropic cost when the fragments are bound.

Clearly these are weakly-binding fragments but there are examples of progressing 10mM fragments to nM, biochemically-functional PPI inhibitors.

If optimisation proves to be difficult or impossible, organisations need to find ways to stop projects in a timely way. Target validation will always be an issue and FBDD does not solve that.

On the question of LLE as a marker for X-ray detection of the hit, I would suspect that solubility is actually the underlying parameter....

A brief comment to Christophe: Compound 6 includes many of the atoms from the other two compounds, hence, I think it is not fair to do a straight analysis of the three Kds. The affinity of compound 6 has to be scaled down.

I interpreted the original question slightly differently in that I thought it was asking at what point do you give up because although your fragment derived molecule is pretty potent, you’re still not seeing any inhibition in a functional assay?

The answer to that is going to vary depending on the MoA of the cpd, but if you’re working with fragments that compete with substrate, you’d only predict a 2 fold loss in potency on going into an enzyme assay if you run it at Km.