Dan's recent post discusses the limits of fragments binding to PPIs.  This paper from a while back came to my attention recently and I think it is important to bring up for discussion.  In it, they discuss the physical limits of binding.  They start with this:

Protein−ligand binding is a delicate balance between the loss of entropy resulting from complexation and the enthalpy gained by forming favorable contacts with the protein.

Entropy changes comes from linking two fragments, loss of internal flexibility, and reorganizing water in the binding site.  Current thinking (2 years ago) provides that in terms of favorable energy, van der Waals forces are the primary driver of affinity, while H-bonding and electrostatic interactions drive specificity.  Then they revisit this seminal paper from Kuntz et al but with the intent of exploring ALL biophysical properties rather than drug like ones.  For this study, Ligand Efficiency is DeltaG divided by the HAC.

If van der Waals forces are the primary driver of affinity, there should be a correlation between affinity and size/contact area. 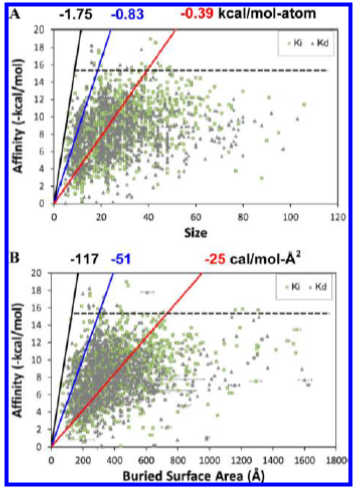 There is not.  In terms of efficiencies, the median efficiency is -0.34 kcal/mol*atom.  Putting that in terms of buried surface area (BSA), they determined that the median efficiency is -23 cal/mol*A^2 (Angstrom squared).  To compare, if you look at only solvent accessible area, this value goes down to -7 cal/mol*A^2.  However, despite their inherently larger binding areas, macromolecules do not bind with greater inherent affinity than small molecules.  They argue that this is due to better "burying" of the small molecules.  As expected the most ligand efficient compounds are small, highly charged compunds buried in highly charged sites.  The limit is -1.75kcal/mol*atom, but a soft limit of -0.83 kcal/mol*atom is proposed.

For every 1A drop in average contact distance, the maximal efficiency goes down -0.41 kcal/mol*atom.  Wait!  What about desolvation you ask?  Isn't the entropic cost of desolvation in charged molecules very high?  In many of the highest efficiency complexes, there is water in the binding sites, so not all of the water is displaced, the authors state.  They also state that the charges in the binding pocket may not be fully solvated because the pockets around the charge are so small.  Yeah, I am not happy with that explanation either.

So what makes maximally affinity?  Kuntz et al. said after 15 heavy atoms your affinity plateaus.  In fact, Kuntz showed that it is exceedingly rare to find an affinity >-15 kcal/mol, arguing that this is due to biological effects, namely clearance.  This paper argues that that cutoff is "seredipitously random or manmade".  Other people have argued that as ligands increase in size the maximal efficiency would drop because the number of interactions that need to be optimized increases and the only way to do this is through structural compromises and thus reduced affinity.  The authors of this paper begrudgingly admit this hyopthesis fits their data.

So, what implications does this mean for fragments? Does Kuntz's data mean that fragment libraries should be no bigger than 15 heavy atoms? Should we consider adding charged moieties or even metals?  They argue that this is a source of vast potential improvement for drug design.
Posted by Dr. Teddy Z at 6:34 AM

This is a nice paper, and I do tend to agree with their reasoning for the maximum affinity of around -15 kcal/mol:

"We hypothesize that once a ligand is bound for the lifetime of a protein (~ 1 day), there is no evolutionary pressure to coax ligands and proteins to associate more tightly."

They also note that beyond this affinity you might as well go covalent.

Regarding library design, the results here do suggest that including more charged fragments may be fruitful, and a few people have also included metal chelators:

I've been thinking about the metal thing a lot. Because the multivalent metal ions bring a lot of enthalpy to the table. But I really think the protein needs to be able to bind the metal ions in the first place. But you should have checked for that in the first place and made sure that anything needed is actually present in your buffers. Sometimes they will co-purify but often not. And you could get partial occupancy which results in noisy data and batch to batch variability.

A good paper is doi:10.1074/jbc.C900031200
Cyclopiazonic Acid Is Complexed to a Divalent Metal Ion When Bound to the Sarcoplasmic Reticulum Ca2+-ATPase
There you have a ligand binding a magnesium ion in a calcium site.