Flatland: a nice place to be

The ideal shape of compounds used for biological screens is a subject of vigorous debate, with some arguing that shapely molecules may be superior in various ways to the “flatter” aromatic compounds that tend to dominate libraries. This view was expressed more than a decade ago in the paper, “Escape from Flatland: Increasing Saturation as an Approach to Improving Clinical Success.” However, those conclusions have been challenged. Since many of us are trying to discover drugs, it is worth asking what actual drugs look like. This is the subject of a new ACS Med. Chem. Lett. paper by Seth Cohen and colleagues at University of California, San Diego. 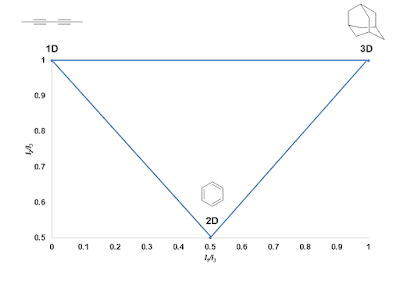 Assessing shapeliness is itself contentious. Here the researchers chose the intuitive metric, principal moment of inertia (PMI), which uses a simple triangle plot to assess whether a molecule is more rod-like, disk-like, or sphere-like. The degree of shapeliness (3D Score) can be calculated by summing the x- and y-coordinates to give values between 1 (rod- or disk-like) and 2 (sphere-like).

The researchers first extracted more than 8500 drugs and nutraceuticals from DrugBank, all of which had associated three-dimensional structures and MW >100. PMI calculations revealed that nearly 80% were linear or planar, with 3D Scores < 1.2. Another 17.5% had 3D Scores up to 1.4, while only 0.5% were greater than 1.6. Interestingly, this distribution is similar to that of the ZINC database of small molecules. You might expect a correlation between size and shapeliness, with larger molecules being more three-dimensional, but this was not the case. Perhaps related, a separate analysis found no correlation between shapeliness of fragments and resulting leads.

The 3D structures of compounds in DrugBank are calculated for energy-minimized conformations, which are not necessarily the biologically relevant conformations. So the researchers next went to the protein data bank (PDB) and its crystal structures of 502 unique DrugBank molecules bound to various proteins. Some molecules were represented multiple times (1036 structures of sapropterin!), and for these the PMIs were averaged. The results of this analysis were similar, with 83.5% of molecules having a 3D Score < 1.2 and just three molecules with a 3D Score > 1.6. As with the DrugBank data, there was no correlation between 3D Score and molecular weight.

Further analyses of compounds with multiple crystallographic structures was interesting. For diclofenac, with 51 PDB entries, 3D Scores ranged from 1.03 to 1.52, with the minimized score being 1.22. However, some of these structures are likely low affinity with questionable biological relevance. In contrast, for five approved HIV drugs, the PMIs remained very similar for molecules bound in the active sites.

Getting out of flatland is surprisingly difficult: the researchers examined the PMIs for several fragments from libraries designed to have shapely members and found that none had 3D Scores > 1.4. They suggest clever ways of increasing three dimensionality, such as building organometallic molecules. While this is likely to increase novelty and patentability, it also introduces unknown biological risks. One analysis that would be interesting is whether natural-product-derived drugs are significantly shapelier than their purely synthetic counterparts.

The true need for topological diversity in feedstocks and final drug molecules remains unclear given the overwhelming number of linear and planar drugs. The question remains as to whether more 3D compounds represent attractive and untapped therapeutic space, or if more linear/planar molecules are indeed the best topologies for bioactive molecules.

This is indeed an interesting question, and I hope that chemists – particularly those in academia – continue to make and test ever more exotic molecules. But since the first word of this blog is “Practical,” I would not discount the more planar molecules that make up most of our pharmacopoeia.
Posted by Dan Erlanson at 6:14 AM 11 comments:

Fragments vs JAK1, a sequel from LEO

Four years ago we highlighted a paper from LEO Pharma describing inhibitors of the kinase JAK1, which is implicated in a host of inflammatory conditions. Although they developed low nanomolar inhibitors, these showed phototoxicity, which was unacceptable for the topical applications the researchers had in mind. The molecules were also not selective against closely related JAK2, whose inhibition can cause neutropenia and anemia. A recent paper in J. Med. Chem from Andrea Ritźen and collaborators at LEO and GVK Biosciences describes a more selective series.

As mentioned previously, hits came from about 500 fragments screened against JAK2 using SPR and validated in a biochemical assay against JAK1. Most fragments had similar activities against both proteins, but compound 1 was moderately selective for the latter. Initial SAR around the fragment revealed that the methyl group was essential to activity and that methylating the pyrazole nitrogen atoms also obliterated binding. The molecule looks like a hinge-binder, but because it can assume four different tautomers docking was difficult. Fortunately, replacing the difluoromethyl substituent with a phenyl ring in compound 6 improved affinity and led to a crystal structure, which showed the methyl group making lipophilic interactions with the protein.

The crystal structure also revealed that the phenyl ring didn’t quite fill the lipophilic ribose-binding pocket, so the researchers replaced this with the more three-dimensional cyclohexyl substituent in compound 7, which yielded a ten-fold improvement in biochemical potency as well as the first cellular activity. The philosophy behind further optimization is described eloquently: “in the spirit of fragment-based drug design – start small and make every added atom count – small substituents with balanced polarity were added to the cyclohexyl analogue 7.” Unfortunately, although several polar substituents introduced onto the cyclohexyl ring improved biochemical potency, they did not do much for cell activity.

Replacing the cyclohexane moiety of compound 7 with a norbornane led to compound 11, which was not only more potent against JAK1 but also less lipophilic and more soluble. The researchers then borrowed a nitrile from an approved pan-JAK inhibitor, leading to compound 40. This molecule has low nanomolar activity against JAK1 and is somewhat selective against closely related JAK2, JAK3, and TYK2. It is quite selective against a panel of 50 other kinases and does not inhibit several cytochrome P450 enzymes or bind to hERG. Oral bioavailability in rats is fairly low, but this should not be a problem for topical indications.

As noted in the paper, the researchers were able to benefit from published work from multiple other companies that has led to five approved JAK inhibitors plus several more in clinical development. While another JAK inhibitor may not be the most pressing medical need, this paper is still a nice example of structure-based design that illustrates several points. First, ligand efficiency was improved during the optimization process, in contrast to common perceptions. Second, fragment selectivity was also improved during optimization. And finally, although this sounds banal, it matters what you have in your fragment library: had the des-methyl version of compound 1 been the only representative of this core in the LEO library the researchers would not have discovered it. In other words, while simplifying your fragments will decrease molecular complexity, sometimes a single methyl group can make all the difference.
Posted by Dan Erlanson at 6:09 AM No comments:

Failing honorably and openly on PrP

Many of the posts on Practical Fragments – and indeed much of what appears in the literature – describe successes. This is obvious in the list of fragment-derived clinical compounds, and discoveries of high-affinity tool molecules or even advanceable fragment hits make up a large share of the 750+ posts on this blog. But of course, most of what we do in science fails, and such failures can also be informative. Eric Minikel and 25 collaborators from the Broad Institute and multiple other organizations have just published an illustrative case study on bioRxiv. (Eric also has a detailed and eloquent blog post of his own about the work.)

The researchers describe a five-year effort to find small-molecule binders of the prion protein, PrP, which misfolds and forms aggregates that lead to neurodegeneration. The hope was that binders could be turned into PrP stabilizers or perhaps even degraders. PrP has been studied for decades and there are plenty of literature reports of small molecules that seem to interact with the target, but none of these have been convincingly validated. Moreover, the crystallographic structure of the protein does not reveal attractive binding pockets.

Fragment-based methods have succeeded for other difficult targets, so the researchers performed STD and 19F NMR screens. Of 6630 pooled fragments, 238 initial hits were retested by STD NMR, leading to 80 hits that were then assessed by two-dimensional (TROSY) NMR. This led to a single hit, a substituted benzimidazole. Unfortunately the binding site could not be determined: chemical shift perturbations were spread across the protein. Differential scanning fluorimetry (DSF) showed the molecule caused a slight decrease in thermal stability. Both of these results suggest some sort of pathological mechanism, but the researchers did multiple experiments to rule out aggregation. A dose-response suggested a dissociation constant well above 1 mM, and none of 54 analogs tested proved any better. Soaking crystals of PrP with 20 of these was also unsuccessful.

Next, the researchers performed a thermal shift assay of just over 30,000 compounds (not necessarily fragments), which yielded both stabilizers and destabilizers. Unfortunately, none of 93 tested by two-dimensional NMR (HSQC) revealed any sign of binding. A DNA-encoded library (DEL) screen of 256,000 macrocycles also didn’t yield any confirmed hits (though more on that below), nor did a computational screen of just under 7 million molecules.

Given this experience, the researchers cautiously conclude that their “results may hint toward relative rarity of PrP binders in chemical space.” They do suggest several alternative approaches, such as screening the more biologically-relevant membrane-bound form of the protein. It may also be worth doing a high-concentration crystallographic screen. Finally, the researchers note that one of the DEL scaffolds “was judged to be a likely covalent binder and was not pursued further.” This decision may be worth revisiting. Indeed, covalent approaches have led to clinical compounds against another formerly undruggable target, KRAS.

According to the blog post, the researchers have pivoted to oligonucleotide therapeutics, where they seem to be making good progress. This makes sense, and I wish them luck. But I hope someone returns to PrP itself with new tools. If they do, the assays established and described here will prove invaluable.
Posted by Dan Erlanson at 6:10 AM No comments: