Fragments in the clinic: ABBV-744

Bromodomains, which recognize acetylated lysine residues, are popular cancer targets due to their role in gene regulation. A plethora of potent inhibitors have been reported, many of them derived from fragments, and some have even gone into the clinic. The story behind one of these, ABBV-744, was recently published in Nature by Yu Shen and colleagues at AbbVie.

The story starts with a protein-detected NMR screen (highlighted here), which ultimately led to ABBV-075 (highlighted here). This molecule binds tightly to the four BET-domain family members (BRD1, BRD3, BRD4, and BRDt). However, ABBV-075 causes gastrointestinal toxicity as well as a reduction in platelets when tested in mice. Indeed, these effects are seen when BRD4 alone is genetically silenced in mice, suggesting on-target toxicity. However, each of the BET proteins has two separate bromodomains, called BD1 and BD2, and the researchers thought that a selective inhibitor of the BD2 domain might be better tolerated.

Screening about 2500 compounds from the ABBV-075 program revealed that compound 1 was still quite potent against the BD1 domain of BRD4 but lost activity against the BD2 domain. Further optimization ultimately led to ABBV-744, which is at least two orders of magnitude more selective against the BD2 domains of all four BET-domain proteins over the respective BD1 domains. It also shows no activity against a panel of kinases and other bromodomains, and is orally bioavailable. A crystal structure of the molecule bound to either BD1 or BD2 reveals that the key interactions seen in ABBV-075 are maintained, but that the added amide moiety makes interactions only available in BD2, while the larger diphenylmethyl ether moiety is better accommodated in BD2 due to a slightly larger pocket (containing a valine rather than an isolueucine residue).

ABBV-744 is active against multiple acute myeloid leukemia and prostate cancer cell lines, and the paper thoroughly explores the biology of a selective BD2 inhibitor. Most striking is that in a mouse xenograft model, ABBV-744 shows similar activity at 1/16 of its maximum tolerated dose (MTD) as ABBV-075 shows at its MTD. Even at doses well above efficacious exposure levels, ABBV-744 shows only limited platelet reduction and no gastrointestinal toxicity in mice. As mentioned at FBLD 2018, this molecule has entered clinical development, while ABBV-075 has quietly been dropped from AbbVie’s pipeline.

This is a lovely example of biology-guided medicinal chemistry that is reminiscent of the BCL-family inhibitors, which started with less specific molecules and culminated with the approval of BCL2-selective venetoclax. Although the fragment origins of ABBV-744 are clear, they are not mentioned in the paper and – like the KRAS inhibitors and AZD5991 – could be easily overlooked. In all these cases small starting points have delivered potentially huge drugs, and Practical Fragments wishes everyone involved the best of luck.
Posted by Dan Erlanson at 6:10 AM No comments:

Mitogen-activating protein kinase-interacting kinases 1 and 2, or MNK1 and MNK2, are implicated in several cancers while seeming to be dispensable for normal cells, making them attractive oncology targets. Indeed, we’ve previously written about two FBDD-derived clinical compounds against these kinases, eFT508 and ETC-206. In a J. Med. Chem. paper published last month, Alvin Hung and colleagues at A*STAR describe a third series.

The researchers started by screening 1700 fragments in a biochemical assay, resulting in 11 molecules that inhibited both MNK1 and MNK2 with decent ligand efficiency. Four of these had a meta-substituted pyridine, as in compound 6. Making a few analogs led to compound 13, with low micromolar potency against both enzymes. 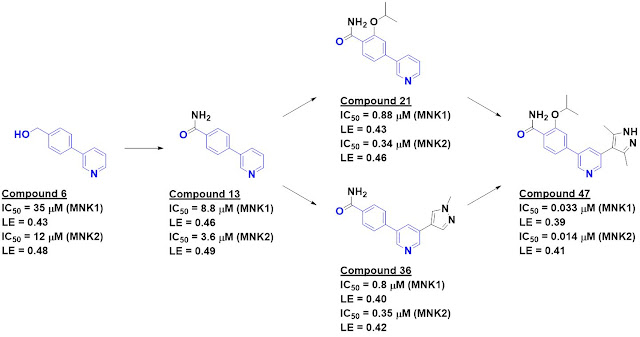 Crystallography proved unsuccessful, but making the reasonable assumption that the pyridyl nitrogen binds to the kinase hinge region led to two models, only one of which was consistent with the SAR. Decoration of the phenyl ring led to compound 21, with submicromolar activity. Although still early, the researchers collected both in vitro and in vivo ADME data on this molecule, which turned out to be quite promising.

Next the researchers turned to the pyridyl ring and found that appending small (5-membered) heterocycles could also boost potency, as in compound 36. At this point, after multiple attempts with previous compounds, crystallography finally yielded a structure that confirmed the proposed binding mode. Combining elements from compounds 21 and 36 directly led to only a slight boost in activity, but further tweaking ultimately led to compound 47, the most potent member of the series. Unfortunately this molecule was unstable in mouse liver microsomes, but a related compound showed good mouse pharmacokinetics as well as impressive selectivity in a panel of 104 kinases.

No pharmacodynamic studies are described, and perhaps this series was deprioritized to focus on ETC-206, which was also developed at A*STAR. Indeed, the later compounds in this paper reveal a frustrating struggle between potency and stability often seen in medicinal chemistry. This is captured in a nice timeline that shows a rapid improvement in potency over about 8 months, followed by a slight drop as the researchers tried to improve exposure. Although no Goldilocks molecule is reported, this paper is nonetheless a lovely example of fragment to lead optimization done for the most part without the aid of crystallography.
Posted by Dan Erlanson at 8:09 AM No comments:

Toward SAR by SFX

As our poll last year revealed, X-ray crystallography has inched out ligand-detected NMR to become the most popular fragment-finding method. One criticism often leveled at crystallography is biological relevance: very few proteins in nature are found in the crystalline state. Moreover, crystallography is a dish usually served cold, with crystals typically frozen in liquid nitrogen. The reason for this is that the powerful X-ray beams used to elucidate the structure of molecules also rip them apart, and freezing them slows the damage. But protein-ligand complexes at low temperature may not always reflect our more temperate world.

One approach to collecting crystallographic data at room temperature is to do so very quickly, before radiation damage can occur. This is done using serial femtosecond crystallography (SFX), in which many crystals are individually examined using brief, intense beams from X-ray free-electron lasers (XFELs). The X-ray pulses last less than 20 femtoseconds, a time so breathtakingly short that light only travels the width of a typical human cell. In a recent IUCrJ paper, Robin Owen, Michael Hough, and collaborators at the Diamond Light Source, the University of Essex, and elsewhere describe a high-throughput version.

The protein crystals themselves can be quite small, just 1-20 µm across, compared with the > 50 µm crystals typically used in crystallography. These microcrystals are mounted in silicon “chips” containing 25,600 little apertures; the X-ray beam can then be swept across each of the positions.

The researchers demonstrated that they could collect high-quality data for three proteins that are particularly sensitive to radiation damage: two heme peroxidases and a copper nitrite reductase. For all three proteins, they were able to determine high-quality structures of bound fragment-sized ligands. Indeed, some of the ligands were even smaller than all but the smallest fragments: imidazole (five non-hydrogen atoms) and nitrite (three non-hydrogen atoms). The latter case was particularly impressive given that the nitrite displaces a bound water molecule, so the difference between empty and liganded protein is even more subtle.

The first word of this blog is “Practical,” so how does this technique stack up? The researchers used 2-4 chips for each structure, and data collection took about 14 minutes per chip. Despite the miniaturization, sample consumption is not trivial: 1.4 to 6 mg of protein and 4-40 µmol of ligand for each data set. However, the researchers showed that could get by with less data – in some cases significantly so – and state that a 4-5-fold improvement in throughput would be straightforward. Using processing software such as PanDDa could further improve results. I suspect it is only a matter of time before we see the first FBLD by SFX screen. It will be fun to see how useful it turns out to be compared with established methods.
Posted by Dan Erlanson at 5:54 AM 1 comment:

Fragments vs RIP2: from flat fragment to shapely selectivity

Last week we highlighted the utility of shapely fragments. However, as the latest review of fragment-to-lead success stories again shows, starting with a “flat” fragment does not condemn a lead to flatland. This is illustrated in a recent J. Med. Chem. publication by Adam Charnley and colleagues at GlaxoSmithKline.

The researchers were interested in receptor interacting protein 2 kinase (RIP2), which is implicated in various inflammatory diseases. A fluorescence polarization screen of 1000 fragments at 400 µM yielded 49 hits with inhibition constants ranging from 5-500 µM. Thirty of these confirmed in a thermal shift assay, and 20 were characterized crystallographically bound to the enzyme. Hit-to-lead chemistry was pursued for five series; the most successful started with compound 1a. 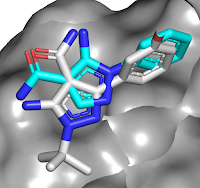 The crystal structure revealed that the carboxamide of compound 1a makes interactions with the hinge region of the kinase, with the phenyl group in the back pocket. A search of related molecules available in-house led to compound 2a, with a satisfying boost in potency. Interestingly, the crystal structure of this molecule bound to RIP2 revealed that the binding mode of the pyrazole moiety had flipped to keep the phenyl ring in the back pocket (compound 1a in cyan, 2a in gray). Enlarging the phenyl group to better fill the pocket led to compound 2k.

This molecule had relatively poor selectivity against several other kinases, but introducing a ring as in compound 8 improved the situation. Crystallography suggested that installing a bridged ring would pick up further interactions with the protein, and although the resulting molecule did not have better affinity, selectivity improved. Finally, a hydroxyl group was introduced (compound 11) to try to pick up interactions with a non-conserved serine residue. This addition did not improve biochemical activity, and in fact a crystal structure revealed that the hydroxyl group was pointing towards solvent, but the activity in human whole blood improved. Importantly, compound 11 was remarkably selective for RIP2: just 1 of 366 other kinases tested at 1 µM showed >70% inhibition.

This is a lovely fragment-to-lead success story that reiterates several important lessons. First, a generic (in this case commercial) and nonselective fragment can lead to novel, selective series. Second, as has been seen multiple times, fragment binding modes can flip unexpectedly, especially during early optimization. Finally, despite the relative flatness of fragment 1a (Fsp3 = 0, though the two aromatic rings are slightly twisted), it could be optimized to a more shapely lead, and the increased complexity is likely responsible for the impressive selectivity. Left unreported is the stability and pharmacokinetics of compound 11: the hydroxyl and all those sp3-hybridized carbons are likely metabolic hotspots. As is so often the case in lead discovery, what solves one problem can too often create another.
Posted by Dan Erlanson at 6:06 AM No comments: