Looks can be deceiving: Getting misled by crystal structures

Researchers at AstraZeneca and Uppsala University have published a nice review in the most recent issue of Drug Discovery Today entitled “Limitations and lessons in the use of X-ray structural information in drug design.” Although not focused specifically on fragments, the lessons are broadly applicable. The article presents three assumptions that are made when using crystallographic data:

“While these assumptions seem perfectly reasonable at first sight,” the authors note, “they are not all necessarily true.” The review then provides examples where these assumptions went awry, as well as the lessons that can be drawn from these mishaps.

The fact that crystallography can be misleading should not come as a surprise to anyone who has worked in drug discovery, but what makes the article worth reading is the range of examples. I should say that I’m a huge fan of crystallography and have found it to be very valuable. Perhaps because of this, it is all the more distressing when it leads me astray. In my experience with fragment-based drug discovery, this has most frequently happened with assumption #3; it is not uncommon to find a lovely fragment making appealing interactions with the protein, but to still have difficulty measuring any affinity, much less improving it.

Anyone have stories or thoughts to share?
Posted by Dan Erlanson at 8:42 AM No comments:

I wanted to give you guys a little something to think about, especially in light of the book coming out that I am involved with. Most of you have by now, or should have by now, read Alex Alex's paper in Current Topics in Med Chem from last year. It overall is a great issue (with a super duper paper on NMR in drug discovery by yours truly wink wink nudge nudge).
Alex's paper looks back at all of the fragment papers and looks at what was the starting point, where it went, etc. I took his data and applied my own filter to it (what one former colleague termed the ZOF, the Zartler Optical Filter).
The following two tables are from Chapter 2 of the upcoming book, on designing a fragment process. 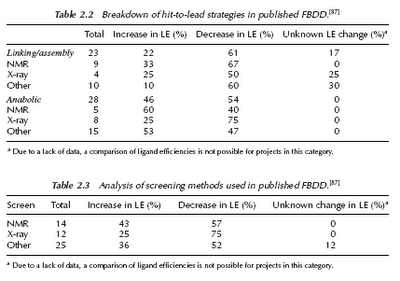 This data is looking at the origin of the type of fragment strategy employed and the main method used to support it moving forward. Linking/assembly is exactly what it sounds like, attaching different fragments (zinc binding group and biphenyl a la Abbott). Anabolic is the logical growth of a fragment to a lead-like/drug-like molecule. Other could not be classified from Alex's paper.
There were roughly the same number of projects that used either anabolic or linking. However, the anabolic method would appear to be better at maintaining or increasing ligand efficiency.
I also looked at NMR vs. X-ray vs. Other methods in terms of projects that maintain or increase LE. NMR and X-ray have the same number of projects (whose sum is equal to the total of Other). It does appear that NMR is better than X-ray in maintaining LE.

Here is the firebomb: With the well documented history of success, sufficient data to say that the anabolic approach is superior, and the NMR approach superior to X-ray, why is it that large pharma seems to be so slow in adopting what is an obviously successful method?
Posted by Dr. Teddy Z at 5:21 PM 5 comments:

The inspired Charles Darwin to develop his theory of evolution, and now Belgium-based Galapagos may be able to teach us something about the evolution of fragment-based drug discovery: the company recently announced the purchase of Sareum’s structure-based drug discovery services unit. A few days later, UK-based Sareum announced that it was discontinuing internal laboratory research.

Sareum’s platform focused on the crystallographic discovery and recombination of fragments; Galapagos is planning to merge these capabilities with their BioFocus DPI contract services group.

What conclusions can be drawn from this acquisition? On the one hand, clearly Galapagos feels the technology has value. On the other, a million dollars doesn’t go far these days; it would be difficult to put together the platform Sareum has been building since 2003 for this sort of money.

Obviously a single data point can not lead to a whole theory, but it does spawn many hypotheses. What does this mean for service-based business models? For valuations of European vs US companies? For the value (fiscal and scientific) of fragment-based drug discovery in general?