A post earlier this month mentioned matrix-metalloproteinases (MMPs). Now, a recent issue of J. Am. Chem. Soc. carries a Communication about fragment-libraries designed for zinc proteases, of which MMPs are a subset.

Seth Cohen and coworkers at University of California San Diego and the Weizmann Institute of Science in Israel designed two libraries based on known zinc chelators: quinoline sulfonamides (QSL) and benzimidazole sulfonamides (BISL) (see Figure). They rapidly assembled 40 of the former and 37 of the later using microwave chemistry and tested these against a handful of different MMPs.

Both libraries produced hits against MMP-2, MMP-3, MMP-8, and MMP-9. Control compounds designed not to chelate zinc showed no activity, and X-ray adsorption fine structure spectroscopy experiments suggest that the molecules are indeed binding to the catalytic zinc. Selectivity is often an issue in targeting metalloproteinases, and it was thus gratifying to find that at least one fragment inhibited MMP-2 with low micromolar activity while showing no activity against the other MMPs. Molecular modeling provides some rationale for this selectivity.

One could argue that many of the library members do not meet conventional definitions of fragments, and could be seen as more scaffold-like (or worse – one has a molecular weight pushing 600 Daltons!) And of course, it is not clear that either scaffold will be suitable for drug development or even tool compounds – it is possible their propensity for zinc binding will be a problem inside cells. Still, the notion of creating custom-made fragment libraries for various classes of targets certainly makes sense; folks have done this for kinases and even RNA, and it is reasonable to see this approach extended to metalloproteinases. Cohen and colleagues described a fragment library consisting of more conventional metal chelators earlier this year in ChemMedChem.

This publication also confirms the results of our poll that fragment-based approaches are catching on in academia. But industry is already in the sandbox: at least two companies, AnCore and Viamet, are using similar strategies to target metalloproteins.
Posted by Dan Erlanson at 7:46 AM 4 comments:

Just a quick summary of our poll last month. The results (below and to right) show that just over half of you who responded (51%) are in industry and just under half (46%) are in academia, government, or other non-profit organizations. Also, over three-quarters of you (77%) are active practitioners of FBDD. 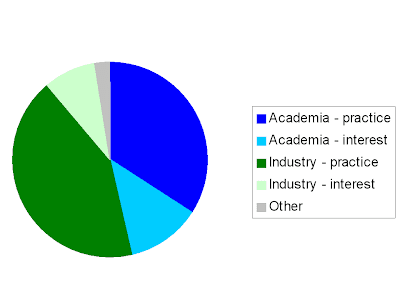 Thanks to everyone (over four score) who took the time to respond!
Posted by Dan Erlanson at 7:53 AM No comments:

Fragment linking: how much is it worth?

Fragment linking is a topic we’ve discussed a few times. One of its great appeals is that, all other things being equal, the entropic cost of binding one linked molecule is less than the cost of binding two separate molecules. Thus, linking two fragments should give more than an additive increase in binding energy. As the late William Jencks noted, for two fragments A and B:

The lower the Kd the better, so ideally E < 1, though in practice finding a suitable linker can be tricky and all too often E > 1 (sometimes >> 1). But how low can E go? How much of a boost can you get by linking two fragments? Claudio Luchinat and colleagues at the University of Florence looked at this question experimentally in a recent paper in J. Med. Chem.

The researchers took PMAHA, a known inhibitor of the matrix metalloproteinase MMP-12, and dissected it into two fragments, AHA and PMS, by conceptually “cleaving” the bond connecting them (see figure). This simplifies analysis: since the two fragments are almost identical to the linked molecule, there are no concerns that atoms in the linker interact with the protein.

The crystal structure of PMAHA bound to MMP-12 had been previously reported, but Luchinat and co-workers solved the co-crystal structure of AHA and PMS bound simultaneously to MMP-12. The two fragments overlay fairly well with the parent molecule: AHA binds to the catalytic zinc, while PMS binds in the S1’ pocket. The AHA fragment is rotated with respect to its position in PMAHA, though it makes the same interactions in both structures.

Thermodynamic binding parameters for the three molecules were determined (see figure). As expected, PMAHA binds considerably more tightly than the product of the affinities of the two fragments: E << 1 (in fact, about 0.0021). And in nice accord with theory, this enhanced affinity is entropic: both fragments bind with favorable enthalpy and unfavorable entropy, while the linked molecule has both favorable enthalpy and entropy. In other words, the salutary effect of linking these two fragments does seem to come entirely from entropic effects.

One of the more interesting lessons from this paper is a sense of how much of a boost in potency you can expect if fragment linking goes well: about 500-fold. In theory you could do better, but in practice you should expect much more modest benefits: a prominent success of SAR by NMR on a different metalloproteinase reported a 14-fold boost in affinity. But just like the lottery, the hope of a big payout will continue to attract people to the linking game.
Posted by Dan Erlanson at 6:21 AM No comments: