A particularly active discussion on LinkedIn has prompted us to update the list of commercially available fragments - looks like a number of new additions since our last post. Note that we are restricting this list to suppliers specifically offering fragments, as opposed to general compound libraries (which of course will likely contain many fragments, but will make this list too unwieldy, and are probably less of a go-to source for people just entering the field).

Otava
~3800 fragments, mostly RO3 (increased HB acceptors for kinases)
All have at least one ring; filtered to remove certain functionalities

I’ve also been told that BioFocus sells fragments, but can’t find this on their web-site.

Finally, Cambridge MedChem Consulting has a nice list with more detailed descriptions of many of these suppliers.

Are there companies we’re missing? Does anyone have any experience with any of these that you would like to share?
Posted by Dan Erlanson at 3:23 PM 2 comments:

The researchers used NMR-screening of roughly 1200 fragments to identify five that competed known inhibitors; Compound 4 (see figure) was the most potent, with an IC50 of 16 micromolar in a functional assay. NMR experiments showed a weaker binding interaction, on the order of 200 micromolar, and surface-plasmon resonance (SPR) experiments were even less conclusive: the compound showed super-stoichiometric binding, indicating that multiple molecules were interacting with the enzyme rather than sitting specifically in the binding site. However, the researchers were able to obtain a crystal structure showing that the molecule binds in a hydrophobic pocket at the active site. Although they don’t mention it in this paper, in public presentations the researchers have reported seeing additional molecules of Compound 4 pile on top of each other, essentially forming a stack on top of the protein. Perhaps, as the authors suggest in the supplementary material, this is an example of a particularly insidious aggregation phenomenon: a legitimate hit that can also form aggregates.

In order to access other parts of the protein, and reduce the propensity for aggregation, the researchers relied on analog screening and modeling to generate Compound 18a, which is a more “three-dimensional” molecule. Further elaboration led to a series of compounds such as 19e, with low nanomolar potency, as well as one-to-one binding in the SPR assay.

Despite their potency, these molecules were inactive in cell-based assays, likely due to high polar surface areas and their resulting low cell permeabilities. To fix this, the researchers replaced the benzimidazole fragment with a naphthyl group, which led to a decrease in biochemical potency but did lead to cell-active molecules such as Compound 23b. Moreover, a crystal structure revealed that this molecule binds in a similar manner to the original fragment 4.

This paper exemplifies another example of fragment-assisted lead discovery: the original fragment morphed from an indole to a benzimidazole to a napthyl group, yet the final molecule still owes a debt to the initial fragment.
Posted by Dan Erlanson at 6:19 PM No comments: 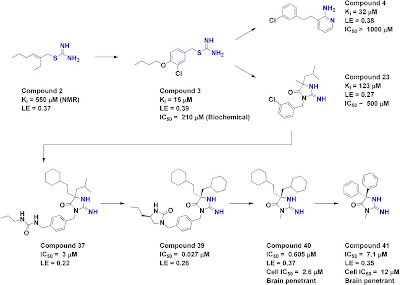 Many FBLD publications report the rapid discovery of new leads against established targets such as kinases or Hsp90. BACE-1 is just the opposite: references suggest that the program had been in place since before 2004. These papers, along with previous papers (for example here and here) on BACE-1 from AstraZeneca and Astex, illustrate that FBLD is also powerful for discovering leads against difficult targets.
Posted by Dan Erlanson at 4:23 PM No comments: 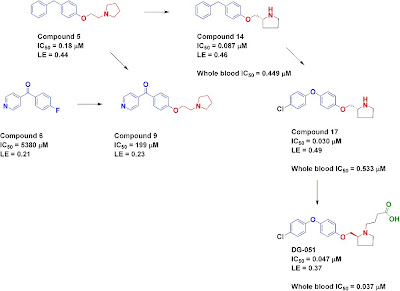 The article states that DG-051 entered phase 2 clinical trials “for the prevention of myocardial infarction and stroke”, although no reports of development appear in clinicaltrials.gov. Also, in what has been an all-too-common event over the past year, deCODE filed for Chapter 11 bankruptcy and announced that it planned to sell “substantially all of its assets.” Practical Fragments wishes the best of luck to all the folks there. Happily the structural biology and fragment-screening group has (re)gained independence as Emerald BioStructures.
Posted by Dan Erlanson at 9:13 PM No comments: