This year ends with an entire issue of Current Topics in Medicinal Chemistry devoted to FBDD. Rob van Montfort and Ian Collins provide a brief editorial overview of the six papers. Collins and colleagues also describe their application of fragment-based methods to develop inhibitors of the anti-cancer target protein kinase B (AKT).

Finally, in the longest article in the collection, Vicki Nienaber discusses how fragment-based methods may be particularly useful for discovering compounds that will cross the blood-brain-barrier to target the central nervous system.

As 2009 comes to a close, Practical Fragments would like to thank our readers, old and new. May you all have a happy and productive 2010!
Posted by Dan Erlanson at 8:11 AM No comments:

There have been some great conferences this past year (see summaries of some of them here and here), and 2010 is shaping up nicely, particularly with the announcement of FBLD 2010 (below).

February 3-5: CHI’s Molecular Medicine Tri-Conference will be held in my beautiful city of San Francisco, with a program on medicinal chemistry that includes a fragment track, and a short course on “Fragment-Inspired Medicinal Chemistry” on February 2.

March 21-25: The spring ACS meeting will also be held in San Francisco. There will be a symposium on “Fragment Based Drug Design: Novel Approaches and Success Stories.”

April 20-25: The Keystone Symposium on computer-aided drug design will take place in Whistler, British Columbia. Although not exclusively devoted to fragments, the schedule shows plenty of talks on the topic.

April 27-28: Cambridge Healthtech Institute’s Fifth Annual Fragment-Based Drug Discovery will be held in San Diego. And if you missed the short course in San Francisco, you have another chance on April 26.

June 6-9: The 32nd National Medicinal Chemistry Symposium will be held in Minneapolis, Minnesota, and Dave Rees is organizing a session on fragments on June 9. Looks like a great lineup, with top speakers from Astex, Plexxikon, Novartis, Abbott, and UC Berkeley.

October 10-13: Finally, standing alone in the second half of the year, Fragment-based Lead Discovery 2010 will be held in Philadelphia, PA. This is the third in a popular series of conferences that started with FBLD 2008 in San Diego and continued this year in York, UK. An emphasis next year will be on biophysical methods - old and new - for fragment identification and characterization, as well as sessions on libraries, chemical strategies for fragment evolution, and success stories. A web site will be available shortly where further details will be posted. We anticipate a call for oral and poster contributions during the Spring of 2010. As far as we know this is the first major fragment event on the east coast of the US, so don't miss it!

Know of anything else? Organizing a fragment event? Let us know and we’ll get the word out.
Posted by Dan Erlanson at 6:54 AM No comments: 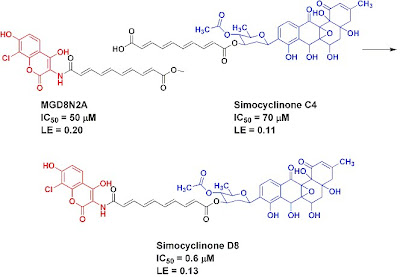 Antibiotics gleefully seem to ignore the Rule of 5, but it wouldn’t hurt to get a smaller, less complicated analog. Replacing either of the two ends with smaller fragments may be a productive approach, as would optimizing the individual “fragments” themselves.
Posted by Dan Erlanson at 9:07 AM No comments:

We wrote last month about Warren DeLano, and in the December issue of Nature Structural and Molecular Biology Axel Brunger and Jim Wells have written a beautiful obituary.

Together with Warren’s family, Axel and Jim are also organizing a commemorative fund:

This award shall be given to a top computational bioscientist in recognition of the contributions made by Warren L. DeLano to creating powerful visualization tools for three dimensional structures and making them freely accessible. The award, accompanying lecture, and honorium will be given annually in the context of a national bioscience meeting or a Bay Area gathering of computational bioscientists at Stanford, UCSF or UC Berkeley. For the award special emphasis will be given for Open Source developments and service to the bioscience community.

For the award selection, a committee will be formed consisting of experts in the computational and biological sciences. Submission for nominations will be open to everybody.

Tax deductible donations can be made by check to the address below or by PayPal.

The earliest stages of lead discovery usually focus on obtaining a molecule with decent affinity for a given target. Affinity, or binding energy, can be dissected into two components: enthalpy and entropy. On a (very) simplistic level, enthalpic binding comes via specific molecular interactions, such as hydrogen bonds, while entropic binding results from nonspecific hydrophobic interactions. Optimizing enthalpy is usually more difficult than optimizing entropy: engineering a polar interaction requires more precision than adding a bit of grease. In a new paper in ChemMedChem, Andrew Scott and colleagues at Pfizer show how fragments that owe more of their binding affinity to enthalpy make better starting points for optimization than do fragments whose binding is more entropic, even if the entropic fragment is more potent.

The researchers used human carbonic anhydrase (hCA II), a venerable work-horse of biophysical studies. Benzenesulfonamide (compound 1, below) is a known binder, and the researchers studied the thermodynamics of 20 derivatives of this molecule using isothermal titration calorimetry (ITC), taking care to generate high-quality binding data. Adding a fluorine group to the 2-position of benzenesulfonamide (compound 2) improves the potency almost three-fold but lowers the ligand efficiency. In contrast, adding a fluorine to the 3-position (compound 3) improves the potency by seven-fold and also improves the ligand efficiency.

If you were choosing between these fragments solely on the basis of affinity or ligand efficiency, it would be reasonable to choose compound 3, and in fact a search of the literature turned up 15 carbonic anhydrase inhibitors that contained the 3-fluorobenzenesulfonamide substructure and none that contained the 2-flurobenzenesulfonamide substructure. However, a look at the thermodynamic parameters reveals that the affinity of compound 2 is driven by a sizable improvement in enthalpic binding, partially offset by lowered entropy. In contrast, compound 3 has a similar enthalpy of binding as compound 1 but increased entropy. What’s going on?

The researchers determined high-resolution crystal structures for all three of these molecules bound to hCA II. Interestingly, the structure of compound 2 shows a specific interaction between the fluorine atom and a main-chain NH of the protein. In compound 3, the fluorine points towards the hydrophobic wall of the protein.

Adding a 4-benzylamide substituent onto each of these molecules led to improvements in activity. However, this was a relatively modest boost for the more entropic compound 3 to compound 20, but considerably larger for the enthaplically-driven compound 2 to compound 19. Compound 19 shows a highly favorable binding enthalpy, and is the most potent and ligand-efficient of any of the three elaborated molecules.

Obtaining thermodynamic parameters for small-molecule protein interactions has historically been challenging, but in recent years miniaturization and improvements in technology have brought ITC into more non-specialist labs. If you have the resources, it may be worthwhile characterizing the thermodynamic profiles of your fragment hits, and – perhaps – looking more closely at those that show enthalpically-driven binding.
Posted by Dan Erlanson at 2:47 PM 1 comment: