Fragment-based inhibitors of kinases are legion, particularly those that bind in the so-called hinge region where the adenine of ATP normally sits. However, even among these there are many different flavors of inhibitors. In particular, about 10 kinases can adopt a “folded P-loop” conformation, in which the phosphate-binding loop collapses into the ATP binding site. This was the focus of a recent open-access paper in ACS Med. Chem. Lett. by Gavin Collie and colleagues at AstraZeneca.
The researchers were interested in the oncology target c-MET. A ligand-based NMR screen of 1150 fragments (in pools of 6 at 200 µM each) yielded a 6% hit rate, of which 20 confirmed by SPR. Crystallography was attempted unsuccessfully on most of these, but compound 1 was found to snuggle into the active site with the protein in the folded P-loop conformation.
A computational similarity search of AstraZeneca’s internal library identified compound 2, which crystallography revealed to bind in a similar manner, with two hydrogen bonds to the hinge region and the benzyl group buried in a hydrophobic pocket. A second similarity search of the library – this time based on compound 2 – identified compound 3. Crystallography confirmed that the core azaindole moieties of compounds 2 and 3 overlay, and thus fragment merging was attempted.

The resulting compound 5 bound as expected. This prompted yet another computational search of the internal library, and after a bit of medicinal chemistry compound 7 was identified as a mid-nanomolar inhibitor with low micromolar cell-based activity. Crystallography revealed that it too binds to the folded P-loop conformation of c-MET.
Because the folded P-loop conformation is rare among kinases, the researchers hoped that the resulting molecule would be selective. Unfortunately, when profiled against a panel of 140 kinases at the low concentration of 100 nM, 27 of them were inhibited by at least 60%. This is perhaps not surprising given the 7-azaindole core, which has been found to bind to more than 90 kinases, though some compounds containing this moiety are selective.
Nonetheless, this paper is a nice example of structure-guided fragment merging. A cynic could point out that had the researchers screened the entire AstraZeneca compound collection they likely would have identified molecules very similar to compound 7 anyway, but this may have cost more and would not be an option at smaller organizations without million-compound libraries. And the approach is useful for more difficult targets for which high-affinity molecules may not exist – yet.
Posted by Dan Erlanson at 6:06 AM No comments:

This is taken from the title of a recent open-access paper by Matthew Disney and collaborators at Scripps Research Institute Jupiter and Florida Atlantic University in Proc. Nat. Acad. Sci. USA. RNA has long been a target of FBLD: Practical Fragments first blogged about it in 2009, and a 2002 paper reported using fragment linking to obtain a low micromolar binder. So how general is the new approach?
The researchers describe chemical cross-linking and isolation by pull-down fragment mapping (Chem-CLIP-Frag-Map). This involves using photoaffinity probes that can crosslink to biomolecules such as RNA. The probes also have an alkyne tag that can be used to isolate bound molecules using click chemistry. We’ve written previously about such “fully functionalized fragments” (FFFs).
Earlier work had resulted in the identification of compound 1, which binds to a specific site on pre-miR-21, the precursor to a non-coding microRNA linked to cancer. An FFF version of compound 1 was shown to crosslink to pre-miR-21 after irradiation with UV light, and the site of modification could be mapped using a reverse-transcriptase-mediated primer extension, which stalled at the modified bases.
Next, the researchers screened 460 FFFs at 100 µM and found 21 that crosslinked to pre-miR-21. They were ultimately looking to link fragments with compound 1, and thus competition studies were used to eliminate fragments that bound at the same site. This left three fragments, and primer extension studies confirmed that these bound near but not at the binding site of compound 1.
Next, the researchers attached these three fragments to compound 1, with or without various linkers. Some of the resulting molecules had improved affinity, and compound 9 showed the tightest binding according to microscale thermophoresis (MST). Mutational and competition studies confirmed that the molecule binds to the expected site. Importantly, compound 9 not only bound to pre-miR-21, it also blocked processing by the enzyme Dicer. Moreover, it showed activity in cell models consistent with inhibition of pre-miR-21. 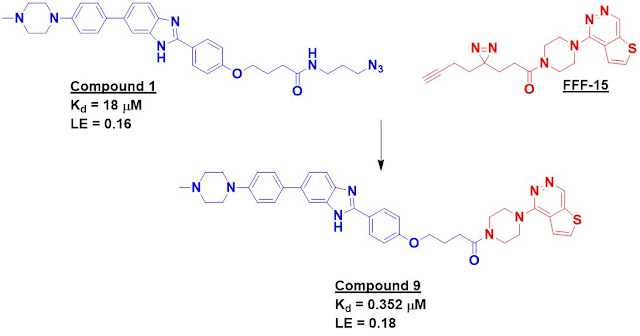 This is a nice paper, but there are several limitations. First, compound 9 is still a fairly modest binder with lackluster ligand efficiency. Indeed, while potency can be overrated, I would love to see a fully synthetic low nanomolar RNA binder. Second, while the approach may be general, it is not necessarily easy, and it requires specialized fragments. And as we noted last year, there is no relation between crosslinking efficiency and affinity. I wish the researchers had tried linking some of the non-selected fragments to see whether these were false negatives. Indeed, given the complexity of the approach, I wonder if the researchers would have been better off simply making and testing an anchor library around compound 1, in a similar fashion as described here.
But whether or not Chem-CLIP-Frag-Map turns out to be the solution to targeting RNA, I wholeheartedly agree with the conclusion: “It may be time to describe biomolecules that are perceived to be challenging small molecule targets as ‘not yet drugged’ rather than ‘undruggable.’”
Posted by Dan Erlanson at 6:07 AM No comments:

Four years ago today we highlighted work invalidating ligand efficiency on Venus. Recently though, the planet of war has been getting all the love. You've probably seen the stunning pictures from the Perseverance rover on Mars. One of its missions is to collect samples for later return to Earth. Many scientists are eagerly awaiting their allotment, among them Herbert George Wells of Bromley University.
There are those who believe that life here began out there - maybe even on Mars. According to this theory, Martian meteorites, or even Martians themselves, seeded life on Earth. If so, any organic fragments on Mars could be ancestral to all life and may generate particularly high hit rates, perhaps approaching those of the "universal fragments" we profiled here and here. And any molecules that can remain intact near the harsh surface of Mars for a few billion years may also have good metabolic stability.
Prof. Wells plans to separate and identify all the organic fragment-like molecules in his sample. While this will undoubtedly make an interesting publication, Prof. Wells is also dreaming of cosmic riches and has teamed up with Dr. Lyttle, Jr. to sell a custom collection of Martian Fragments.
Some people are concerned that a Martian sample may harbor dangerous organisms, but Prof. Wells is not worried. "Frankly, with so many viruses running around Earth these days, it's the Martians who should be afraid!"
Posted by Dan Erlanson at 5:53 AM No comments: