If you want to visualize and manipulate crystallographic data there are plenty of options, such as PyMOL and OpenAstexViewer. However, powerful molecular graphics programs such as these have a learning curve associated with them, and sometimes it’s nice to get a simple two-dimensional image. In the December issue of ACS Medicinal Chemistry Letters, Katrin Stierand and Matthias Rarey describe software they’ve developed to do this.

The researchers tested their software by using it to draw nearly every protein-ligand interaction in the Protein Data Bank (PDB) in which the ligand has 5 to 80 atoms, excluding crystallization buffer components and things like heme or iron-sulfur clusters. For the remaining 200,000+ complexes, PoseView successfully generated plots for 85% of them; interestingly, most of the failures resulted because there were no apparent interactions between the protein and “ligand.” Of the successes, 80% produced high-quality figures in which there were no overlapping features – not bad considering the challenge of reducing a three-dimensional model to a two-dimensional image.

PoseView is incredibly easy to use: just enter a pdb code or upload a structure, and the program spits out an image. I tried it on the very first fragment I discovered, and the result looks quite attractive: 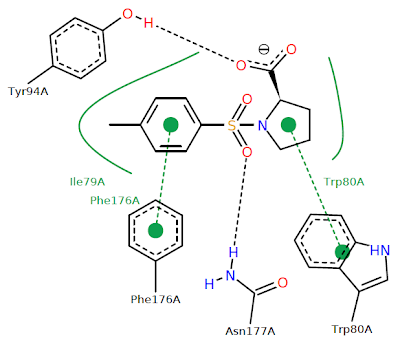 Of course, there is always room for improvement: for example, it would be nice if you could change fonts or colors (the output is a pdf). Still, this is a useful addition to the toolbox of modeling programs.

And with this post, Practical Fragments says goodbye to 2010 and wishes everyone a happy holiday season. We look forward to more exciting developments in 2011 – and if we miss any, please send them our way!
Posted by Dan Erlanson at 7:23 AM No comments:

SAR by Crystallography – minus the “A”

Practical Fragments has highlighted at least a couple papers (here and here) where fragments were identified by crystallography but where functional activity was not reported. Indeed, most experienced fragment hunters will be able to point to cases where they observed well-defined electron density but were unable to measure inhibition. Although this is often a source of frustration, researchers from Johnson and Johnson decided to avoid measuring activity altogether until after a couple cycles of crystallography-guided library design, as they describe in a paper published this month in J. Med. Chem.

The researchers were interested in the protein ketohexokinase, an ATP-dependent enzyme that is a potential target for metabolic diseases. They assembled a primary fragment screening library of 900 compounds with the following characteristics:

This is a fairly standard set of criteria for assembling a fragment library. The researchers broke with convention by pooling fragments into groups of 5, with the members of a given fragment pool as structurally similar as possible. Normally when researchers pool libraries for crystallography-based fragment screening the idea is that each member of a given pool will be structurally unique to facilitate identification. In this case, though, the researchers were interested in observing general features of how fragments bind to the target protein.

Crystals of hexokinase were soaked with the pools, and 60 of these pools yielded electron density in the active site – a very high hit rate of 30%. A number of generalizations could be made about what molecular features were preferred in different parts of the binding site, and this information was used to build a secondary library of about 350 compounds based on 6 scaffolds; the idea was to merge or grow fragments found in the primary screen. These compounds were similarly pooled and screened crystallographically but not functionally, yielding hits from 4 of the scaffolds. The structures of these hits were then used to generate a third library of several hundred compounds around at least 4 separate scaffolds. These compounds were then tested individually to see if they could inhibit ketohexokinase, and were also characterized crystallographically. Gratifyingly, a number of these were active at submicromolar potency, including compound 6.

In addition to showing decent potency against ketohexokinase, compound 6 exhibited respectable drug-like properties as well, including lack of activity against the CYP450 enzymes, high oral bioavailability, and good selectivity against receptors, ion channels, and protein kinases, though other ribokinases were not tested.

This is an interesting and potentially useful approach, but it would be fun to see how it compares with a more “traditional” strategy, where individual fragments are advanced. It should be relatively straightforward to assay fragments from the first and second library for affinity; was fragment 3 (precursor to compound 6) one of the most potent or ligand efficient? Or was the information from fragments with no detectable activity instrumental in delivering the best compounds?
Posted by Dan Erlanson at 7:14 AM No comments:

The fragment-based community is very diverse, with practitioners coming from biochemistry, biophysics, chemistry, computational chemistry, and many other disciplines. Communicating job openings to such a fragmented community can be difficult, but we think Practical Fragments can provide a common place for employers who want to build up fragment expertise of any flavor. If you have an opening you are trying to fill, please add it as a comment to this post. These comments will then be listed in the “Job Openings” link under the “Links of Utility” heading on the right side of the page, so they will always be easy to find.

(Note: this is for positions in fragment-based drug discovery only. There is also a LinkedIn group that lists jobs with a broader but overlapping focus.)
Posted by Dan Erlanson at 9:24 AM 3 comments:

There has been no shortage of fragment-based approaches directed toward the anti-cancer target Hsp90, most of which have relied on growing fragments (see here for some impressive recent examples). Researchers from Abbott published a report providing a couple examples of linking fragments against this target a few years back, but in those cases the ligand efficiencies of the linked molecules were dramatically lower than those of the initial fragments. In a recent paper in ChemMedChem, researchers from Evotec describe an example that maintains the ligand efficiency.

The research group had previously conducted a fragment screen against Hsp90, resulting in a number of hits. In the new paper, fragment hits 1 and 2 (see figure) were both found to have fairly low affinities, but were characterized crystallographically. Interestingly, fragment 2 could adopt at least two very different conformations, depending on whether it was co-crystallized in the presence of fragment 1. In the ternary structure, the two fragments come within about 3 Å of each other, and molecular modeling suggested that four atoms should be able to link them.

Gratifyingly, when such a compound was made and tested, it inhibited the enzyme several hundred-fold more tightly than either of the initial fragments. The crystal structure revealed that the compound binds similarly to the ternary structure of Hsp90 and fragments 1 and 2.

The authors note that “the binding free energy of the linked fragment 3c was found to be exactly the sum of those of the original two fragments.” Of course, this is still a long way from an ideal linking situation: as noted earlier this year a good linker should lead to super-additivity (an improvement of ligand efficiency), not just additivity (maintenance of ligand efficiency). Nonetheless, this example is still better than many attempts at linking, which often are less than additive.
Posted by Dan Erlanson at 7:24 AM No comments:

As 2010 winds to a close, it’s time to start planning for 2011. As in previous years, fragment events seem to cluster in the first half of the year, so start planning now!

February 21-22: SMi’s 10th Annual Advances & Progress in Drug Design Conference will be held in London, and has a number of fragment-based talks. There is also a separate half-day post-conference workshop on the topic on February 23.

February 23-25: CHI’s Molecular Medicine Tri-Conference will again be held in my beautiful city of San Francisco, with a program on medicinal chemistry that includes a fragment section. Notes on this past year’s meeting can be found here.

March 7-8: Fragments 2011, the Third RSC-BMCS Fragment-based Drug Discovery meeting, will be held in Stevenage, UK. This is a biennial event; the last was in Alderley Park in 2009 (you can read about it here and here). Registration is now open, as is a call for posters through January 31.

April 12-13: Cambridge Healthtech Institute’s Sixth Annual Fragment-Based Drug Discovery will be held in San Diego, with at least one pre-conference short course on the topic on April 11. You can read impressions of this past year’s meeting here.

Know of anything else? Organizing a fragment event? Let us know and we’ll get the word out.
Posted by Dan Erlanson at 7:31 AM No comments: