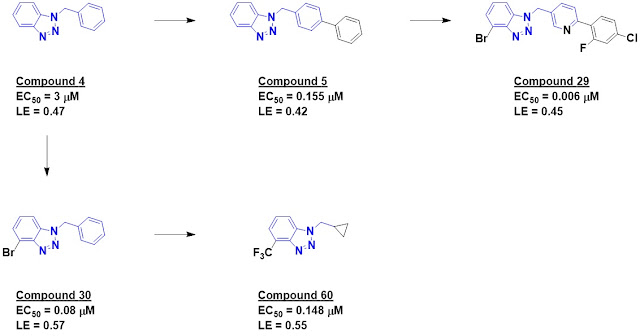 Several lessons can be drawn from this story. First, as Mike Hann warned seven years ago, molecular properties should not be ignored in the push for potency. Indeed, despite the 25-fold decrease in potency for compound 60 compared with compound 29, the smaller molecule is more effective in vivo. This is reminiscent of the Merck verubecestat story, which also involved optimization of a fragment hit to a potent but lipophilic lead that was ultimately abandoned in favor of an initially less active but more ligand-efficient series. The second lesson is that in vitro models can only take you so far. And finally, creative chemists are able to advance fragments even in the absence of structural information. Hopefully more of them will give it a try.
Posted by Dan Erlanson at 6:13 AM 8 comments:

Industrializing native MS: hundreds of fragments against dozens of targets

Native mass spectrometry (MS) is a direct binding assay in which fragment binding to a target is detected when the complex is ionized and “weighed” in high vacuum. The technique is less commonly used than others, and there is some debate as to how well it works. A paper just published in ACS Infect. Dis. by Ronald Quinn and collaborators at Griffith University, the University of Washington, and the University of Toronto provides some encouraging data.

To demonstrate just how high-throughput native MS could be, the researchers started with 79 different proteins. These were all from Plasmodium falciparum, one of the main organisms that causes malaria. The proteins were chosen based on their size (< 50 kDa, for easier MS analysis) and likely importance for the parasite. Of these, 62 gave a good signal-to-noise ratio by native MS and were screened.

The researchers used an existing fragment library of 643 natural products; we highlighted an earlier version of this library in 2013. Of these, 602 molecules met the strict criteria defined in that design, with MW < 250 Da but with other properties more relaxed than rule of three guidelines. The library also contained significantly fewer aromatic rings than conventional fragment libraries and was more “three dimensional,” as assessed both by PMI and Fsp3.

Fragments were screened in pools of 8 at 5-400 µM each, with protein present at 1-20 µM; final ratios were 5:1 to 20:1. Hits were judged qualitatively as strong, medium, or weak, and the researchers estimate that strong and medium binders have dissociation constants < 100 µM.

Just over half of the proteins (32) had at least one hit, and a total of 96 fragments came up as hits. Importantly, many of these were selective: 48 fragments bound just one target, while another 18 bound just two (fragments that hit more than 6 proteins were considered promiscuous and excluded from further analysis).

Similarly to what has been done with NMR and thermal-shift assays, the researchers suggest that native MS can be used to assess ligandability. This is an appealing suggestion, though the researchers do not correlate MS-assessed ligandability with other methods such as SPR or high-throughput screens.

Conventionally, the next step would be to confirm binding with orthogonal techniques. Instead, the researchers took the rather bold move of testing fragment hits against the parasite directly. Remarkably, 79 of the fragments were active at 100 µM, with 13 having IC50 values < 45 µM.

A major strength of this paper is the disclosure of all the hits against all the targets. Not only does this allow others to confirm the results, it also provides starting points for further studies. So what do the fragments look like? Many of them are somewhat PAINful – we previously mentioned the promiscuity of one of their compounds, securinine. Although this molecule only hits two proteins in their panel, previous research has found that native MS can give high false-negative rates. Moreover, even if a molecule is truly inactive against a few dozen proteins, that doesn't mean it won’t hit many of the thousands of other proteins in a live protozoan.

Ultimately I would take any of these molecules with a huge dose of caution. That said, there are lots of interesting molecular structures in here, so if you’re looking to jump-start a program against malaria while exploring new chemistry, it may be worth digging into the data.
Posted by Dan Erlanson at 5:55 AM 2 comments:

The 11 members of the phosphodiesterase (PDE) family cleave cyclic nucleotides such as cAMP and cGMP to regulate cell signaling. These enzymes are established drug targets – sildenefil inhibits PDE5, for example. PDE10A inhibitors have been heavily investigated for a variety of neurological disorders, and fragments have played a role in several efforts: we’ve highlighted work from Merck, AstraZeneca, and Zenobia/PARC on this target. A new paper in Chem. Pharm. Bull. by Ayaka Chino and colleagues describes work from Astellas.

A previous HTS screen at the company had led to a series of low nanomolar inhibitors, but these had metabolic liabilities and also inhibited CYP3A4. Thus, the researchers turned to fragments. No details are given as to library size, screening method, or hit rate, though it is worth noting that Astellas has previously reported fragment screening by crystallography. Compound 2 turned out to be a hit, and examination of the crystallographically determined binding mode proved quite useful. (Astute readers will also note the similarity of compound 2 to one of the Merck fragments.)

Because the chlorophenyl moiety was pointing towards solvent, the researchers decided to lop this off  to lower both lipophilicity and molecular weight. Previous publications had also revealed the presence of a “selectivity pocket”, and the researchers therefore grew towards this pocket, yielding molecules such as compound 7. Further tweaking led to compound 13, with low nanomolar potency. In contrast to the HTS-derived lead, this molecule was metabolically stable in vitro and showed negligible inhibition against a panel of 13 CYP enzymes.

This is a nice – albeit brief – example of how fragments can generate new chemical matter even against an extensively explored class of enzymes. Plenty of questions remain around pharmacokinetics, selectivity, and brain penetration, but the paper does end by promising that more will be revealed.
Posted by Dan Erlanson at 6:11 AM No comments:

Fragments deliver (another) inhibitor for CBP and EP300

In 2016 we highlighted a chemical probe that binds two closely related bromodomains, CBP (cyclic-AMP response element binding protein) and EP300 (adenoviral E1A binding protein of 300 kDa). These proteins bind to acetylated lysine residues in various nuclear receptors and are implicated in several types of cancer. Multiple chemical probes are always nice to have, and in a new paper in Eur. J. Med. Chem., Yong Xu and collaborators at Guangzhou Medical University, the University of Chinese Academy of Sciences, Jilin University, the University of Hong Kong, and the University of Auckland go some way towards this goal.

The researchers started with a virtual screen of 272,741 fragments (MW < 300 Da) docked against CBP. The top 5000 were clustered into related subsets and analyzed manually. Of thirteen fragments purchased and tested in an AlphaScreen assay, two had IC50 values better than 40 µM. Compound 6 was slightly less potent, but showed good selectivity against three other bromodomains.

The docking model of compound 6 suggested that more bulk between the indole and the carboxylic acid could be beneficial. Several molecules were made and tested, with compound 25e being the most potent. A related molecule was characterized crystallographically bound to CBP; this suppored the predicted binding mode.

Next, various small lipophilic elements were added to try to pick up additional interactions, ultimately leading to compound 32h, with low nanomolar affinity. This compound, which is equally active against EP300, also showed promising selectivity: it had no activity in a panel of six other bromodomains, including BRD9, which is inhibited by the chemical probe (CPI-637) mentioned above. Unfortunately compound 32h has no activity in cells, which the researchers speculate is due to the carboxylic acid. Masking this moiety with a tert-butyl ester causes a modest reduction in the biochemical activity but does lead to low micromolar activity in several cell assays.

Although much remains to be done, this is a nice example of advancing a computationally-derived fragment with limited structural information. I suspect we’ll see more of these, particularly for well-understood target families.
Posted by Dan Erlanson at 5:52 AM No comments: