Anti-bacterial targets are not common among fragment-based lead discovery efforts. We’ve written previously about AstraZeneca’s work on DNA gyrase, which led to a clinical candidate. In a recent paper in Bioorg. Med. Chem. Lett., Michael Mesleh and collaborators at Cubist and Evotec describe their efforts on this protein.

Bacterial DNA gyrase has two subunits, GyrA and GyrB, and is essential during DNA replication. It is also well-validated, being the target of decades-old antibiotics such as the fluoroquinolones. The researchers started by screening a library of 5643 fragments against Staphylococcus aureus GyrB using STD NMR, yielding 304 hits. These were winnowed down to 46 based on intensity of the STD signal, novelty, and ease of follow-up chemistry. These were then tested using chemical shift perturbations and crystallography. Although several crystal structures of fragments bound to GyrB were obtained, these did not suggest clear ways to advance the hits.

On the other hand, compound 5, which showed only weak binding by NMR and did not result in a crystal structure, was appealing because of its novelty and polarity. The researchers knew that most ligands that interact with GyrB make a pair of hydrogen-bond donor-acceptor interactions, and they used that knowledge to surmise a binding model. This suggested that growing the fragment towards a pair of arginine residues could improve affinity and led to the synthesis of compound 8, with low micromolar activity.

A crystal structure of a related molecule confirmed the model and also suggested that removing the methyl group would stabilize a more planar conformation better matched to the binding site. Doing so (compound 9) yielded a ten-fold boost in potency. (This methyl is also a nice example of Teddy’s “Sauron Atom”). In a separate paper published last year, the researchers further optimized this molecule to compound 2, with low nanomolar potency and activity in animal models.

Several things stand out about this paper. First, the researchers were willing to pursue a fragment with an affinity lower than other hits. Second, careful modeling and conformational analyses were critical in advancing the molecules. Finally, crystallography was not used in the initial fragment growing. Of course, it helped that the researchers were working with a well-characterized protein amenable to modeling. Still, it is nice to see another example of advancing fragments in the absence of experimentally-determined structures.
Posted by Dan Erlanson at 7:00 AM 1 comment: 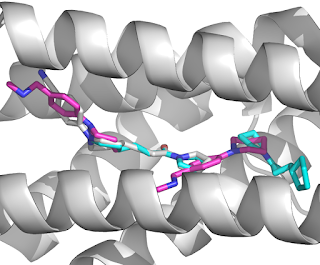 As to the question of whether one should apply growing. linking, or merging, a single case study does not really permit generalization. However, it is satisfying that all three techniques can lead to early leads.
Posted by Dan Erlanson at 6:20 AM No comments:

Fragments and kinases have a long and successful association, as demonstrated by nearly half of FBLD-derived clinical candidates. Most of the attention has been on protein kinases, which transfer phosphate groups to other proteins. But there are more kinases out there, and in a recent paper in J. Med. Chem., Stephan Zech and colleagues at Ariad describe how they developed inhibitors against choline kinase α (ChoKα), a potential anticancer target involved in phospholipid synthesis.

A screen of known kinase inhibitors came up largely empty, so the researchers used STD NMR to screen a library of 1152 diverse, rule-of-three compliant fragments in pools of five, each at 3 mM. This yielded 55 hits, which were then tested in a fluorine-detected NMR (FAXS) assay to see whether they could displace molecules that bind in either the ATP or substrate binding sites. These experiments suggested that 13 fragments bind in the choline binding site while 21 bind in the ATP site; the remaining 21 either bind elsewhere or are artifacts.

Most of the fragments showed minimal activity in functional assays, but compound 11 was an exception. SPR confirmed binding, though it also seemed to bind to an unrelated protein and displayed super-stoichiometric behavior at high concentrations. Nonetheless, it could successfully be soaked into crystals of ChoKα, and the resulting structure revealed that it binds deep in the choline-binding pocket, with the terminal methyl group in a small pocket at the bottom. This is also consistent with STD epitope mapping of a related fragment, which showed that the azepane ring was closely associated with the protein.

An initial search for commercial analogs followed by several rounds of medicinal chemistry led to compound 43, with low micromolar potency, and several more rounds of optimization led to compound 65, with nanomolar binding (by SPR) and inhibition. A crystal structure of this molecule bound to the enzyme revealed that the fragment binding mode is roughly conserved, while the added basic moiety binds close to several acidic residues near the surface of the binding pocket. A very closely related molecule showed low micromolar activity in several cell-based assays (data for compound 65 is not reported). 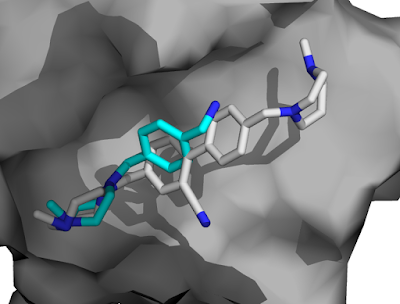 This is an interesting paper for several reasons. First, it reports the successful use of fragment screening against an unusual target. Second, although multiple fragments were found to bind in the ATP-binding site (a productive starting point for many conventional kinases), these fragments could not be optimized. On the other hand, a fragment that binds in the choline-binding site could rapidly be improved to nanomolar inhibitors. Third, although fragment 11 did show some red flags, it was ultimately optimizable – a reminder that some misbehavior in a fragment should not necessarily disqualify it. Finally, the iterative and structure-based nature of the medicinal chemistry – which is well beyond what this brief blog post can cover – makes a nice case study in fragment growing. Of course, the final molecule still has high hurdles to surmount, and it will be fun to see the story progress.
Posted by Dan Erlanson at 4:01 AM No comments: