What is FBDD, and how pure is your library?

The most recent post on the newest biophysical technique for fragment screening coincides with a talk I heard yesterday and some thoughts I have been having recently.  Barry Morgan of GSK gave a talk on DNA Encoded Libraries, which is a Screen for Drug paradigm, as opposite from FBDD as you can go.  The problem I have with such highly elaborated molecules (4-5 synthons) is that they are Screening for Drug, rather they are Screening for Drug Affinity and unless they get extraordinarily lucky, they will still have to medchem to optimize everything else, and maintaining affinity.  I had some interesting discussions at the breaks with Dr. Morgan and a scientist from Vipergen as to the utility of this.  Dr. Morgan agreed that they now mostly focus on libraries of 2-3 synthons (which by and large would fit the definition of fragments (especially if you ignore the linker and humongous amount of DNA sticking off the molecule).  For the GSK work, their method detects signals on as little as 1000 molecules in 25 uL (~66 attoM) and the effective concentration of each molecule in each reaction is much less than 1 pM.  So, this got me to thinking about how pure this combi-chem libraries are (and combi-chem by any other name is still combi-chem)? But, it doesn't matter, aborted chemistry (e.g. 2 synthons instead of 3 synthons) will still be detected.  In fact, this is exactly where some of the power of this technique comes in.  So, is DEL technology FBDD by with an extraordinarly sensitive detection technique?
Don Huddler of GSK gave a talk right before me (and I swear we didn't coordinate our titles) about the FBDD work in his group.  When discussing the GSK library, Don mentioned that their purity cutoff is 95%.  Of course, this is pretty low for a High Concentration Screen (a 5% impurity would be present at 50uM!).  I would prefer to see a 99% cutoff for purity, but how realistic is that?  Additionally, some people use methods that don't detect strong binders or use a HCS % inhibition cutoff for their first triage.  So, a 50uM impurity (worst case for most libraries) would probably not even register as a hit in the primary screen.  But, I am curious what levels of purity people use for their fragment libraries (if any).  I somehow can't seem to get a poll to look right with the new blogger interface, so please post your comments (anonymously if you need to) and tell me what you think.

Practical Fragments has a soft spot for new biophysical methods to identify fragments, many of which are given unfortunately non-descriptive initialisms. To a list that includes SPR, ITC, STD, MS, TINS, CEfrag, and WAC, we can now add Microscale Thermophoresis (MST), described in a new paper in Angew. Chem. Int. Ed. by Philippe Baaske and colleagues at NanoTemper Technologies as well as academic collaborators.

Thermophoresis, also referred to as the Soret effect, occurs when particles move in response to a temperature gradient. In this case, the “particles” are proteins, whose movements depend on size, charge, conformation, and solvation, and can be altered by factors such as ligand-binding.

In MST, a fixed concentration of protein is incubated with varying concentrations of ligand in small capillaries. An infrared laser rapidly heats a spot on the capillary, and an ultraviolet light source excites aromatic residues within the protein. The fluorescence in the heated spot changes as the protein moves along the temperature gradient. This movement is affected by ligand binding, and so measurements at different ligand concentrations can be used to construct a binding curve.

The researchers used MST to study the binding of ligands to several proteins, including ionotropic glutamate receptors (iGluRs), p38-alpha MAP kinase, thrombin, and even the calcium sensor Syt1. The dissociation values determined by MST were mostly comparable to literature values, and the researchers could also perform competition studies in which adding an excess of one ligand blocked a different ligand for the same site.

A nice feature of the technology is that, since it uses native protein, one doesn’t need to worry about the effects of immobilization or conjugation, factors that researchers using SPR, TINS, and WAC must consider. On the other hand, the fluorescence signal relies on native amino acid residues (tryptophan in the examples here), which can be obscured by many compounds. Also, in its current incarnation MST doesn’t appear particularly high-throughput, though it also doesn’t use much protein

Still, this seems like a pretty cool approach. I’ve started seeing NanoTemper at more conferences (such as FBLD 2012), so hopefully you will have a chance to check them out and let us know what you think.
Posted by Dan Erlanson at 7:05 AM 1 comment:

Fragment linking, enthalpy, and entropy: not quite so simple

The strategy of fragment linking dates to the origins of fragment-based lead discovery. The idea that two low affinity binders can be linked to produce a more potent molecule is based on the theory that the binding energies of linked fragments will at least be additive. Indeed, sometimes superadditivity can be observed; in those cases, the binding energy of the linked molecule is considerably better than the sum of the binding energies of the separate fragments. The most common explanation for this is that linking two fragments “pre-pays” the entropic cost of binding to the protein; rather than two fragments locking into fixed binding modes, only a single linked ligand pays this entropic penalty. This makes sense intuitively, but is it correct?

An early example of fragment linking was reported by Abbott researchers in 1997: two fragments that bound to the matrix metalloproteinase stromelysin were linked together to give a molecule that bound about 14-fold more tightly than the product of the affinities of the two fragments. Thermodynamic analyses were conducted to explore the roles of entropy and enthalpy, but these were complicated by the fact that one of the fragments contained an acidic phenol that was removed in the course of linking. In a new paper published in Bioorg. Med. Chem. Lett., Eric Toone and colleagues at Duke University have re-examined this system.

The researchers dissected several of the originally reported linked molecules into component fragments and examined their thermodynamics of binding using isothermal titration calorimetry. All of the experiments produced similar results; a particularly illustrative example is shown in the figure, in which a single bond in compound 1 was conceptually broken to yield component fragments 5 and 8.

As the researchers note, weirdly, the “favorable additivity in ligand binding – that is a free energy of binding greater than the sum of those for the constituent ligand fragments – is enthalpic in origin,” not entropic. It is not clear why this is the case, but what is clear is that the results are completely different from those obtained by Claudio Luchinat and colleagues on another matrix metalloproteinase. In that report, the enhanced affinity of the linked molecule was entirely entropic in origin, as might be expected. So what’s going on here?

One clue is provided by Fesik and colleagues in their original analysis of their stromelysin inhibitors. They noted that, when fragment 8 (acetohydroxamic acid) was added to the protein, biphenyl ligands similar to fragment 5 bound considerably more tightly than when fragment 8 was not present. In other words, the ligands displayed cooperative binding even when they were not covalently linked, probably due to non-covalent interactions between the two bound ligands or possibly to changes in protein structure and dynamics.

It is easy to assume that two ligands bind independently to two sites on a rigid protein, when in fact proteins are anything but rigid, and the addition of one ligand to a protein can dramatically change its properties. Thermodynamics measures changes in the entire system, not just the ligands, and if the protein changes upon ligand binding things can quickly get complicated. As Fesik and coworkers noted:

The observed cooperativity between the two ligands is a factor that should be considered when optimizing compounds for binding to nearby sites, since a portion of the binding energy is due to the cooperativity rather than interactions between the ligands and the protein.

All of which is to say that we remain woefully ignorant of the forces driving ligand binding, let alone fragment linking. But assessing how much better (or worse) a linked molecule binds than its component fragments can still be a useful exercise to guide optimization, even if the thermodynamic origins of the effects are unclear.
Posted by Dan Erlanson at 6:30 AM 1 comment: 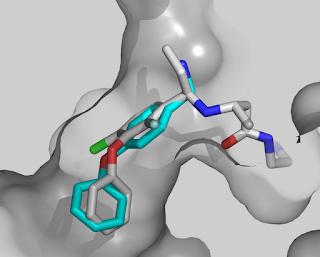 This paper is a beautiful illustration of anti-reductionism: the compounds are not active against the isolated protease domain commonly studied; only by looking at the full-length protein complex could the allosteric site be identified. Molecules such as compound 6 should prove useful reagents for exploring, and ultimately preventing, hepatitis C replication.
Posted by Dan Erlanson at 7:48 AM No comments:

Hard to believe that 2012 is three-quarters behind us, but if you find yourself in the Southern Hemisphere there is still one more notable event this year, and 2013 is starting to take shape.

November 15-16: Fragment-Based Drug Design Down Under will be held in Melbourne, Australia. They say that the surface plasmons are reversed down there!

March 4-5: Feeling bummed that you couldn't make it to FBLD 2012? Can't wait till FBLD 2014? Then check out Fragments 2013, the 4th RSC-BMCS Fragment-based Drug Discovery meeting, which will be held at the Harwell Science and Innovation Campus near Oxford, UK.

Know of anything else? Organizing a fragment event? Let us know and we’ll get the word out.
Posted by Dan Erlanson at 4:07 AM No comments: