Fragment selectivity is something we’ve covered before (see here and here). Sarah Barelier and Isabelle Krimm at the Université de Lyon have published on this topic (see here), and in a recent issue of Current Opinion in Chemical Biology they review the subject and its implications.

The authors document what many investigators have independently observed: some fragments, as expected theoretically, are less selective than larger molecules, but other fragments are quite selective.


Hydrophobic interactions play a major role in protein–ligand interactions and are known to be non-directional, thus allowing binding to a multitude of pockets in different conformations. By contrast, hydrogen bonds were shown to confer specificity but do not always add much binding free energy. This is due to the cost of desolvating both the donor and acceptor of the hydrogen bond, which can nearly equal the benefit of the hydrogen bond formation. Therefore, if the hydrogen bond acceptors or donors are not satisfied in the complex, it is likely that more hydrophobic fragments will be preferred.

This observation—lipophilicity for binding energy, hydrogen bonds for specificity—is consistent with the recent publication from Mike Hann and Andrew Leach, which finds that promiscuity increases with increasing lipophilicity.

One figure in the Barelier and Krimm paper shows 30 fragment-like “privileged scaffolds” that should bind to multiple proteins. What struck me is these molecules’ overwhelmingly planar character: more than half are completely aromatic (such as quinoline and indole), and only one is completely aliphatic. Barelier and Krimm note that:


The low specificity of these molecules is probably owing to their rigid and aromatic structures, well-adapted to protein hydrophobic pockets where π-stacking with phenylalanine and tyrosine are commonly observed.


This reminds me of Tony Giannetti’s talk at the FBLD San Diego meeting earlier this month, where he also noted that fragment hits tend to be relatively flat. Of course, given the negative correlation between aromaticity and good pharmaceutical properties, just because aromatics are frequent hits doesn’t mean they are necessarily the best hits – they may be tricks rather than treats. All of which comes back to a key question for library design: do you focus on the flat “privileged” scaffolds that will likely have high hit rates in your assay but may have baggage, or on the more three-dimensional compounds that may have lower hit rates but may ultimately be more developable?
Posted by Dan Erlanson at 6:35 AM No comments:

Zenobia Therapeutics hosted a one-day FBLD meeting in San Diego last Friday. It was a very full day of seven talks and plenty of informal discussion, with both lunch and happy-hour on a rooftop terrace overlooking the ocean. I’ll try to give some flavor of the event below – those of you who were there, please chime in with your own impressions.

In the first talk of the day, Michael Recht of Xerox’s PARC discussed the construction and use of array-based nanocalorimetry devices, which analyze samples as small as a couple hundred nanoliters. Although conceptually related to isothermal titration calorimetry, the scale of nanocalorimetry makes direct measurement of binding enthalpy difficult. However, the devices are well-suited to measuring the heat output from enzymatic reactions, thus allowing detailed study of enzyme kinetics and inhibitor characterization (see here for a full description and here for a review, both open-access).

Maurizio Pellecchia of the Sanford-Burnham Medical Research Institute gave a wide-ranging talk with the common theme of NMR as an enabling method. In particular he noted that, due to its low protein requirements, ILOE (which we’ve written about previously) could be considered the “homeopathy of NMR;” a recent paper in J. Med. Chem. describes its application to generate hits against Bcl-family proteins. He used a different NMR technique to discover a potent and selective JNK inhibitor that binds in both the ATP and substrate binding sites. On a completely different topic, Maurizio noted that roughly one-third of drug targets contain metals, prompting the construction of a fragment-library designed with metal-chelation in mind, a strategy we’ve written about previously (see also here). Many of these techniques and libraries have now been licensed into a new company, AnCoreX Therapeutics, founded by Maurizio.

Schrödinger was a major sponsor of the meeting, and company scientist Kathryn Loving gave a good overview of the potential of their suite of software tools for fragment-based lead discovery. After lunch I presented a PDK1 story (see here) as well as applications of Carmot’s Chemotype Evolution, and Michelle Arkin from UCSF discussed some of the capabilities of the university’s Small Molecule Discovery Center, with special focus on protein activators and protein-protein disruptors.

Tony Giannetti of Genentech gave a nice presentation on caspase-6 inhibitors and also discussed the power of SPR, a topic on which he’s written extensively. He noted that as long as one is careful about conducting the experiment, the number of promiscuous or non-specific binders found by SPR tends to be less than the number of true hits – he described the former as “a managed headache.”

Tony is in the enviable position of having screened numerous targets using the same platform, allowing him to do some very interesting data mining. One phenomenon that we’ve previously commented on is the fact that, across multiple companies, only about a third of fragments hit in one or more screens, and Roche is no exception (36% across 13 screens). With the merger of Genentech and Roche now complete, Tony has been able to compare the fragment libraries assembled separately at each institution. Interestingly, although they contain < 5% common fragments and < 10% similar fragments, the libraries are, by broad measurements such as size or lipophilicity, statistically indistinguishable. However, the hits from the Roche collection seem to have higher ligand efficiencies. Also, the most potent binders tend to have 13-17 atoms, with the most ligand-efficient molecules generally having a molecular weight < 200. Finally, there has been a lot of recent discussion on making fragments less flat (aromatic) and more three-dimensional (often aliphatic). However, as I predicted 2 years ago, one needs to be cautious: it turns out that hits were actually enriched for flatter fragments, although Tony did mention that most of the screens were against kinases, which may be particularly “flatophilic”.

Vicki Nienaber, founder and president of Zenobia, closed the conference by discussing the potential for fragment-based approaches to tackle diseases of the central nervous system (CNS). The rationale is that, since CNS drugs need to be small to cross the blood-brain-barrier, it pays to start with fragments. Indeed, Zenobia’s fragment library has a molecular weight averaging just 150-175, with an upper limit of 225, which should allow them to avoid molecular obesity. Vicki described the discovery of nanomolar leads against LRRK2, a Parkinson’s disease target, and against PDE10, a Huntington’s disease target.

As far as I know this was the last face-to-face fragment event this year, but there are still several webinars this month and next, and it’s not too soon to start planning for 2012; please see here for upcoming events.
Posted by Dan Erlanson at 6:32 AM No comments:

The phosphatidylinositol-3 kinases (PI3Ks) comprise a family of lipid kinases that are important in a variety of biological pathways and have thus become popular targets for drug-discovery; earlier this year we highlighted a fragment screen out of AstraZeneca against four members of the family. In the most recent issue of Bioorg. Med. Chem. Lett., researchers from Pfizer have published their approach to one of these targets.

Samantha Hughes and colleagues first tested 5960 fragments in a biochemical assay (at 0.5-1.5 mM) to find molecules that inhibited PI3gamma. Hundreds of hits resulted, of which 150 were confirmed in full dose-response curves. These were further triaged using orthogonal methods, ultimately resulting in five X-ray structures of co-complexes, including compound 1, which binds to the hinge region of the kinase. Virtual screening of the larger Pfizer library led to the discovery of additional compounds such as compound 2. Growing compound 1 by adding an acetyl group generated compound 9, improving both potency and ligand efficiency, but synthetic challenges stymied further work. However, a closer examination of the crystal structure of compound 1 suggested a merging strategy with the previously reported compound 10 to generate compound 12, with high potency and ligand efficiency.

Astute (or paranoid) readers will notice that compound 12 contains a Michael acceptor that looks suspiciously reactive. In fact, it is closely related to the notorious rhodanines, many of which form covalent bonds with proteins and, because of the resulting promiscuity, have been accused of “polluting the literature.” Nonetheless, crystallography revealed that the compound binds (noncovalently) to PI3gamma exactly as designed. Moreover, it is fairly selective for other kinases, inhibiting only 3 out of 43 tested at 1 micromolar compound. Compound 12 is also metabolically stable, permeable, and cell active. This is a good example of why it is important not to be overly dogmatic in compound triaging, particularly at an early stage in a project.

Finally, it is worth noting that this paper comes from the storied Sandwich Laboratories, which are being closed down. If there is a silver lining to this tragedy it is that the closure has resulted in a flurry of nice publications from the site. Still, such papers hardly offset the opportunity cost of the drugs that would otherwise have been discovered there – nor the disruption caused to hundreds of scientists. Practical Fragments wishes the best of luck to all of them.
Posted by Dan Erlanson at 7:15 AM 2 comments: 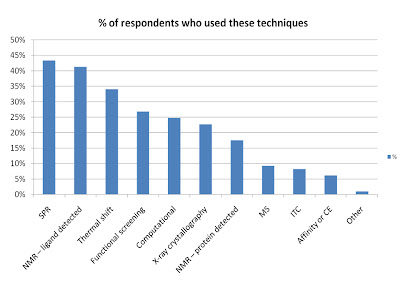 Some of the other techniques such as ITC are still pretty niche at less than 10%, though it will be interesting to revisit this survey in a couple years and see how things change.
Posted by Dan Erlanson at 7:11 AM 5 comments: