Once you’ve established a library and chosen a target, the first step in FBLD is performing a fragment screen. There are lots of ways to do this, and since each method has its pros and cons it is best to use more than one. A good illustration of why this is important has just been published in J. Biomol. Screen. Results were also discussed last November at FBDD Down Under.

Two separate research groups were both interested in the core domain of HIV-1 integrase (IN). They both purchased 500-compound fragment libraries from Maybridge, though since they were purchased about six months apart they contained only 455 compounds in common. One group screened pools of 10 fragments by STD-NMR to identify 84 hits, of which 62 confirmed as single compounds both by STD-NMR and 15N-HSQC NMR. All of these were soaked into crystals of IN, resulting in 15 co-complexes.

The second group used SPR to screen each compound individually; compounds that showed a significantly stronger signal binding to IN than to a reference protein were confirmed by doing full dose-response curves. 16 hits were taken into crystallography, resulting in 6 co-structures, and another 3 gave ambiguous electron density.

The problem, as shown in the figure, is that there was no overlap between the confirmed NMR hits and the SPR hits, or between the crystallographically confirmed fragments! 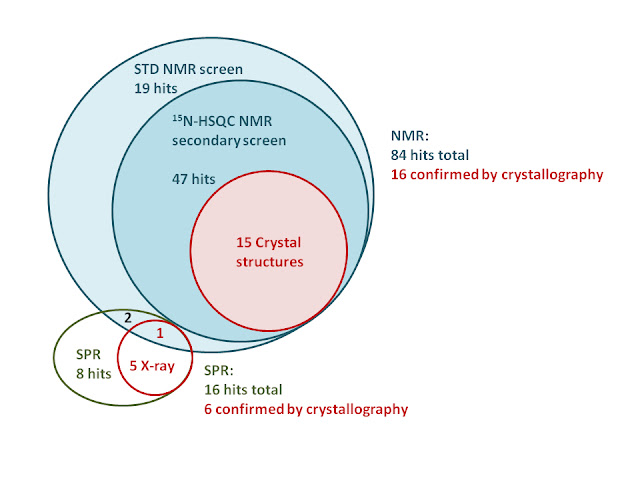 To try to understand this discrepancy, the researchers re-tested the SPR hits by NMR, and the crystallographically confirmed NMR hits by SPR. The two assays were originally run under slightly different buffer and pH conditions, but these seemed not to be a significant factor. Eight of the 15 crystallographically-confirmed NMR hits did show activity in the SPR assay, but also hit the reference protein, so had not been taken forward. Another five had technical issues in the SPR screen (DMSO mismatches); only two showed no binding by SPR.

Five of the crystallographically confirmed SPR hits were retested by STD-NMR, though at a lower concentration (0.3 mM) than the original screen (1 mM) due to solubility issues. Four of these gave good signals, while the fifth produced a weaker signal that could only be detected at the pH of the original SPR screen. The reason the others may not have been detected initially could be because of competition in the original pooled NMR screen: with a 17% hit-rate, many pools probably contained multiple binders.

The title of the paper is “Parallel screening of low molecular weight fragment libraries: Do differences in methodology affect hit identification?” Clearly the answer is yes. Nonetheless, it is important to note that, at the end of the day, this may not matter so much. As the researchers observe:

We find that despite using different approaches with little overlap of initial hits, both approaches identified binding sites… that provided a basis for fragment-based lead discovery and further lead development.

In other words, no matter what technique you use, as long as you have a tractable target and you’re careful (and a little bit lucky) you’ll be able to find useful fragments.
Posted by Dan Erlanson at 6:43 AM

Another important reason for the initial lack of overlap in this study is that the SPR group eliminated fragments that were not selective for the target. Many compounds were eliminated in the SPR study b/c they bound to the desired target, and also to a secondary target. These results show that non-selective fragments in SPR could potentially be identified as hits in NMR studies. Another Venn diagram that accounts for this variance would show greater overlap between the NMR and SPR methods.

The authors state the following........."Therefore, it appears that the selection criteria for classification of a hit in the different approaches, rather than the different conditions that were used, were a major reason for the lack of overlap."

I am fascinated by these results. So we saw last year http://practicalfragments.blogspot.com/2012/04/seventh-annual-fragment-based-drug.html that the same fragment can be identified for different and be progressed into a lead. Now, we see that same fragments against the same target lead to different compounds based upon the detection method and how you define a hit.

To state the obvious, it seems that early decisions in FBLD can have a dramatic impact in later development. Being aware of those early decisions and biases is absolutely important.

But does this example run counter to one of the major selling point of FBLD? It has been described that FBLD's major advantage (over traditional screening methods) is that you don't get stuck in local minima. I've heard the comparison to FBLD being a 10-foot ladder from which you can more accurately survey the drug discovery landscape, avoid those local minima and get to the global minimum.

Do these results argue that FBLD is no different than screening? Or--in FBLD--do all roads lead to Rome?

Good comments all. Anonymous raises an interesting philosophical question about whether FBLD allows one to reach the global minimum as opposed to getting stuck in local minima. I guess the way I see it is that there isn’t necessarily a “perfect” drug for a given target, but rather a variety of possible drugs, assuming the target is druggable at all. One only needs to look at the number of effective statins, HIV protease inhibitors, VEGF inhibitors, and PDE5 inhibitors that are marketed, for example.

FBLD can put you on a productive road, and if you end up in Paris rather than Rome, well, you’ll probably still have a good time!

Do this result call into question the logic of eliminating promiscuous binders since they turned up useful molecules in the NMR experiment? Finding a group that binds seems to be one of the major goals of FBDD since it is generally used on difficult to drug targets. Selectivity could be added during optimization.

I think it depends on what you mean by promiscuous. Fragments that legitimately bind to multiple targets are probably fine - see:

What one does want to avoid are the pathological promiscuous binders, such as PAINS: