Imagine an alien species sees a single photo of a human. They would have no idea how our arms and legs move, or that our mouths can open and close. So it is with protein crystal structures: even multiple static images often fail to show possible conformations. Pockets open and close in unexpected places, and these can be critical for drug discovery. But how do you find these “cryptic” pockets? Harsh Bansia, Suryanarayanarao Ramakumar, and collaborators at Indian Institute of Science, Bengaluru and Pennsylvania State University provide a new approach in J. Chem. Inf. Mod.
The researchers were studying a bacterial xylanase called RBSX and had mutated a tryptophan residue to an alanine. When they solved the crystal structure, they found that the mutation had created a surface pocket that was filled with a molecule of 1,2-ethanediol (EDO). EDO is an ingredient in antifreeze because of its ability to prevent ice formation, and this property also makes it a common cryoprotectant in crystallography. The EDO molecule was making both van der Waals contacts as well as a hydrogen bond with the protein. The researchers found similar results when they used propylene glycol. (See here for a related discussion of MiniFrags, the smallest of which are the size of propylene glycol.)
To see whether water could make these same interactions, the researchers determined another crystal structure in the absence of EDO. Surprisingly, a phenylalanine side chain rotated and closed the pocket. Had this been the only structure solved, the possibility of pocket formation would not have been suspected.
Next, the researchers conducted molecular dynamics simulations. Starting from the closed state, the pocket remained occluded by the phenylalanine, giving no hint of its potential presence. Starting from the open state and removing EDO, the pocket also rapidly closed. In other words, in the absence of a ligand, the pocket appears to collapse in upon itself.
Importantly, these observations are not limited to a mutant bacterial protein. The researchers looked at published crystal structures of four unrelated proteins with known cryptic pockets and found that EDO could bind in all of them. They also ran molecular dynamic simulations on two proteins in which EDO was included as a virtual cosolvent. For both NPC-2 and IL-2, addition of EDO was able to open up cryptic pockets that had been previously found using other molecules; we’ve discussed earlier computational work on IL-2 here.
This is a nice example of following up on an unexpected observation, and is well-suited for further study. For example, it would be interesting to do a systematic study of EDO and propylene glycol binding sites throughout the entire protein data bank. For those of you doing molecular dynamics or crystallography, it may be worth adding EDO – virtually or experimentally – to see if it reveals any surprises in your favorite proteins.
Posted by Dan Erlanson at 6:05 AM No comments:

The Wnt signaling pathway has been implicated in multiple diseases, from Alzheimer’s to cancer to osteoporosis. To be able to bind receptors, Wnt proteins must be post-translationally modified with a palmitoleate group. The carboxylesterase Notum removes this group, shutting of signaling. Thus, inhibitors of Notum could maintain Wnt activity. In two J. Med. Chem. papers, E. Yvonne Jones (University of Oxford), Paul Fish (University College London), and collaborators describe three series of inhibitors derived from fragments.
The palmitoleoyl group is highly lipophilic, and previous work with Notum had revealed a predilection for hydrophobic carboxylic acids. Thus, in the first paper, the researchers assembled a library of 250 diverse carboxylic acids, all rule-of-three compliant. Each was tested (10-point dose-response) in a biochemical screen up to 100 µM. Twenty compounds had IC50 < 25 µM, and all of these were soaked into crystals of Notum, resulting in 14 structures. Two series were pursued.
Compound 5 was one of three pyrroles with low micromolar potency. Fragment growing led to compound 20, and further SAR ultimately led to compound 20z, with high nanomolar activity. Unfortunately, this is a fairly lipophilic molecule, with clogP = 5.5. Indeed, despite best efforts, including paying close attention to lipophilic ligand efficiency (LLE), potency tracked closely with clogP for this series.

The second series, as represented by compound 8, was less potent but also less lipophilic. Walking various substituents around the phenyl increased both properties (compound 25n) and further tweaking led to compound 26. Although this molecule had promising in vitro ADME properties, it was deprioritized in favor of another series described in the second paper.

In addition to the biochemical screen, the researchers also conducted a crystallographic fragment screen at the Diamond Light Source XChem platform. This yielded a whopping 60 hits of the 768 fragments screened, with compound 7 being notable for its high potency, ligand efficiency, and LLE. Iterative structure-based design led ultimately to low nanomolar compound 23dd.

Compound 23dd was active in cell-based assays and had acceptable pharmacokinetic properties in mice. The researchers were particularly interested in modulating Wnt signaling in the brain, and in vitro studies suggested that compound 23dd would have good blood-brain permeability. Unfortunately, this turned out not to be the case, for reasons that are still not clear. However, another molecule derived from compound 7 was superior – hopefully the subject of a future paper.

These are nice structurally-enabled fragment to lead stories, and the medicinal chemistry strategies are particularly well described. Notably, the researchers were able to optimize fragment hits to nanomolar binders while maintaining low molecular weights and (in the second and third cases) reasonable lipophilicity. In addition to clear examples of property-driven medicinal chemistry, these papers illustrate that fragment-based methods can yield a variety of starting points, which can be useful when one lead series runs into trouble.
Posted by Dan Erlanson at 6:32 AM 3 comments:

A year into the COVID-19 pandemic more than 2.3 million people have died, with deaths in the US approaching 500,000. These are staggering numbers, and the scientific community has rapidly responded. Amidst this disaster, it is easy to lose sight of longstanding, even more deadly threats, such as heart disease.
A leading cause of metabolic disease is overconsumption of fructose. Because it is sweeter than other natural sugars and cheap to produce, fructose is widely used in processed foods. Fructose is not subject to the negative feedback regulation of other sugars, and overconsumption has been linked to nonalcoholic fatty liver disease (NAFLD), insulin resistance, and cardiovascular disease. The first step in fructose metabolism is mediated by the enzyme ketohexokinase (KHK), so blocking it seems like a reasonable approach.
More than three years ago we highlighted a paper from Pfizer describing the fragment-based effort which led to compound 1, an inhibitor of KHK. That post ended by noting that there was “still some way to go” to reach a drug. A paper published late last year in J. Med. Chem. by Kentaro Futatsugi and colleagues from Pfizer describes the journey to the clinic. 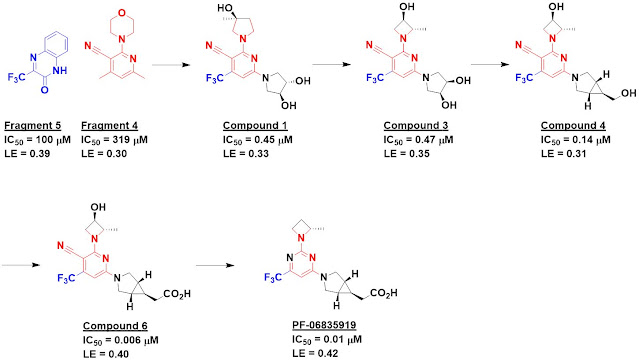 Compound 1 was well-suited to SAR by parallel synthesis, and a variety of replacements for the methylpyrrolidine (on top) led to compound 3. Although this molecule had similar affinity as compound 1, a crystal structure revealed that it had shifted its binding mode such that the other pyrrolidine ring was pointing towards an important arginine residue. Exploring a diverse range of replacements led to compound 4, with improved affinity driven in part due to interactions between the hydroxyl and the arginine side chain. Replacing this hydroxyl with a carboxylic acid led at last to a low nanomolar lead.
Compound 6 was unstable when incubated with human hepatocytes, and various studies revealed that glucuronidation at the remaining hydroxyl was responsible. Removing the hydroxyl and lowering lipophilicity by removing the nitrile ultimately led to PF-06835919. This compound is potent, orally bioavailable, and clean in a variety of off-target assays.
This is a beautiful example of lead optimization guided by structure with a keen focus on molecular and pharmaceutical properties. The initial fragments are difficult to discern in the final molecule, which is not a bad thing: the whole point of fragment-based discovery is giving multiple options for creative medicinal chemistry. In contrast to last week’s post, crystallography was essential for the program; it also benefited from the applied serendipity of parallel synthesis.
Often these sorts of publications are the valediction of a halted program, but not here: PF-06835919 is moving forward in three clinical trials, including a phase 2 trial for NAFLD. Interestingly, the compound was first dosed in humans in 2016 – a year before the initial paper. This gap between clinical efforts and publications is a reminder that our list of fragment-derived clinical compounds will always be incomplete. I look forward to watching PF-06835919 advance.
Posted by Dan Erlanson at 6:04 AM No comments:

Last week’s post highlighted how biophysical methods, and in particular structural insights, can be critical for advancing fragments to leads. But while everyone likes a structure, one quarter of respondents to our 2017 poll said they were comfortable optimizing fragments on the basis of SAR alone. (See also a recent review.) A new example of structure-free optimization has been published in Bioorg. Med. Chem. Lett. by Remond Moningka and colleagues at Merck.
The researchers were interested in the GPCR neuropeptide B/W receptor subtype 1 (NPBWR1, also known as GPR7), a potential target for obesity. Although impressive advances have been made towards obtaining structural information on membrane-bound proteins such as GPCRs, especially using cryo-EM, routine structure-based design is generally not an option.
The researchers started with a 30,000 member library of fragments between 200-350 Da. Both the size of the library and the size of the fragments are on the large side compared to what is typically used. A cell-based screen (cAMP assay) at 100 µM yielded 500 hits that inhibited at least 30%. Counter-screening against an unrelated GPCR whittled down the number to 20, of which just 3 provided dose-responses. The low confirmed hit rate illustrates both the utility of a larger library as well as the number of false positives likely to arise in a cell assay.
SAR by catalog on compound 1 led to compound 2, and further SAR led to compound 3c, with low micromolar activity and good ligand efficiency. Replacing the nitro group with a more pharmaceutically acceptable trifluoromethyl group produced compound 10. It is worth noting that compound 10 is still fragment-sized yet is >300-fold more active than the initial hit. This is a useful reminder that one can often make significant improvements even before fragment growing. Finally, extensive SAR studies around the phenyl ring ultimately led to compound 21a, with low nanomolar activity.

The pharmacology around GPCRs can be complicated, and compound 21a turned out not to be a simple competitive (orthosteric) antagonist of NPBWR1. Rather, it seems to act as a negative allosteric modulator: it reduces the affinity of the natural ligand.
This is a concise success story of advancing a fragment in the absence of structural information. Does this mean we should not strive for structures? Heck no! Not only would structures likely facilitate faster and further improvements, they might explain the mechanism of action of the compounds. I, for one, would love to know where and how they bind.
But this paper is another reminder that you do not always need crystallography - or even a model -  to take a fragment to a lead.
Posted by Dan Erlanson at 6:04 AM No comments: