Linking two fragments together to achieve a boost in potency has been done a number of times (see here, here, here, and here), though it often doesn’t work as well as might be hoped (see here). To better understand the energetics of fragment-linking, Marc Nazaré, Hans Matter, and colleagues at Sanofi-Aventis Deutschland have analyzed ligands for the blood coagulation enzyme factor Xa (fXa) and published their results in a recent issue of Angew. Chem. Int. Ed.

The researchers “deconstructed” potent fXa inhibitors into component fragments, measured their inhibition constants (and thereby inferred their binding energies), and compared these binding energies with those of the original linked molecules. One of the first observations was that many of the component fragments bound so weakly as to show no measurable activity, a phenomenon that has been observed previously.

In an exemplary case, cleaving a single bond connecting the two component fragments of a 2 nM ligand (1a, below) yielded one fragment (1g) with 58 micromolar activity and another (1d) whose activity was worse than 10 millimolar. Because the second fragment has such low affinity, the binding energy of linking is really just a lower estimate, but it seems to be at least 3.3 kcal/mol, which is greater than the binding energy of fragment 1d itself. In other words, the affinity brought about by linking is greater than the affinity of the weakly binding fragment. The superadditivity provided by the linker in this case is about 300-fold, a similar value to that observed in the unrelated MMP-12 system. This is perhaps all the more remarkable given the fact that the fragments are connected by a linker containing several rotatable bonds, the entropy of which should partially counter the advantages of linking.

In fact, a common strategy to improve the potency of two linked fragments is to rigidify the linker. Often this doesn’t work: in a second case, the Sanofi-Aventis researchers cleaved one bond of a 3 nM ligand (2a, below) to yield two fragments with roughly equal potency. However, even though the linker is more rigid than in the previous example, the binding energy due to linking is less – just 2.0 kcal/mol, representing a boost of about 30-fold.

As the authors note:


The introduction of rigid aromatic moieties as a common approach to increase affinity does not necessarily maximize the benefit from the linker effect as detrimental affinity contributions might originate from suboptimal orientation and accommodation of specific binding elements.

There are many more examples in this paper than can be covered in a blog post; the authors dissect compounds 1a and 2a at a number of different points, and while the component fragments typically bind less tightly than simple additivity would suggest, there are lots of interesting details.

Finally, it is interesting to note that ligands 1a and 2a consist of a relatively hydrophobic fragment (1g or 2g) connected to a more polar fragment (1d or 2h). The fact that these show superadditivity is consistent with Mark Whittaker and colleagues' proposal last year that linking such fragments is likely to maximize additivity, although given the precise interactions made by both parts of the molecules the details get a bit messy. We’re not yet at the point where the universe of molecular interactions can be distilled to rigid rules.
Posted by Dan Erlanson at 7:24 AM 3 comments:

February 19-23: Molecular Medicine Tri-Con 2012 will be held in San Francisco, with a section on fragments on February 21.

April 17-18: Cambridge Healthtech Institute’s Seventh Annual Fragment-Based Drug Discovery will be held in San Diego, with short courses on SPR and FBLD taking place on April 16. This is a chance to meet both editors of Practical Fragments! You can read impressions of last year’s meeting here and 2010’s here.

April 27: Dr. Teddy Z will be giving a webinar on NMR in hit-to-lead discovery.

May 13-17: The 30th Noordwijkerhout-Camerino-Cyprus Symposium Trends in Drug Research will be held in Amsterdam, including a session on fragment-based drug discovery.

June 6-8: Cambridge Healthtech Institute’s Twelth Annual Structure-Based Drug Design will be held in Boston, with a session on FBLD.

August 19-23: The Fall 2012 ACS meeting will take place in Philadelphia, PA, and has at least one section on fragment-based drug discovery.

September 23-26: Finally, FBLD 2012, the fourth in an illustrious series of conferences, will be held in my fair city of San Francisco. This should be a biggy – the first such event in the Bay Area (and the weather in September is usually decent too). You can read impressions of FBLD 2010 and FBLD 2009.

March 4-5: Fragments 2013, the 4th RSC-BMCS Fragment-based Drug Discovery meeting will be held at the Harwell Science and Innovation Campus near Oxford, UK.

Know of anything else? Organizing a fragment event? Let us know and we’ll get the word out.
Posted by Dan Erlanson at 7:14 AM 1 comment:

As regular readers know, there are lots of ways to find fragments, each with its own strengths and weaknesses. Isothermal titration calorimetry (ITC) is useful for being able to extract thermodynamic values from an experiment, but it tends to be low-throughput and is thus used more as a secondary rather than a primary assay. To make calorimetry more convenient, Michael Recht and colleagues at Palo Alto Research Center have constructed nanocalorimeters. They describe using these “enthalpy arrays” for fragment screening in a paper just published online in the Journal of Biomolecular Screening.

In a typical ITC experiment, a protein is mixed with a ligand and the tiny temperature change that occurs upon binding is detected. In the case of nanocalorimeters, up to 96 detectors are arranged on a plate, and sample volumes are typically a few hundred nanoliters. At this scale, the enthalpy of binding becomes very challenging to measure, but it is possible to measure the heat generated during the course of a reaction as an enzyme processes its substrate. This allows one to follow the reaction in real time without any dyes, labels, or artificial substrates. Also, since an inhibitor will change the reaction profile in a predictable manner, one can determine its mechanism of action.

Each detector in the enthalpy array is set up such that droplets are rapidly mixed together in sets of two. In the experimental set, one droplet contains the protein of interest while the other contains a substrate and a fragment. (Each detector also incorporates a control pair – one droplet containing the substrate/fragment mixture and another containing bovine serum albumin.) In the current paper, the researchers were looking for competitive inhibitors of PDE4A10, a phosphodiesterase implicated in inflammatory disorders. The protein was present at a final concentration of 5 micromolar, substrate was at 2 mM, and each fragment was present at up to 2 mM. 160 very small fragments (average molecular weight only 154 Da) were screened individually, resulting in 11 competitive hits with Ki < 2 mM; 2 other hits displayed more complex kinetics.

The 11 competitive hits were characterized in more detail; the most potent had a Ki of 0.32 mM and the most ligand efficient had LE = 0.43 kcal/mol-atom. In collaboration with Vicki Nienaber and colleagues at Zenobia, all 11 of these were taken into crystallography experiments. This proved challenging: unliganded PDE4A10 crystals suitable for fragment soaking could not be grown, necessitating more labor-intensive co-crystallography. Unfortunately, although some crystals were obtained, they did not diffract at high enough resolution to unambiguously fit the electron density of the fragments, though there was evidence for binding in the active site. The researchers were able to crystallize PDE4A10 with pentoxifylline, a known phosphodiesterase inhibitor. Since many of the fragments have structural features reminiscent of other phosphodiesterase inhibitors, this suggests starting points for modeling.

As described in this paper, enthalpy arrays could be used as a primary screen for fragment hits with defined modes of action before follow-up by slower methods. Although in this particular case crystallography was not successful determining co-crystal structures of the novel fragments, in a recent talk Michael described a related system which did yield good crystal structures. I look forward to seeing additional applications of this approach.
Posted by Dan Erlanson at 7:07 AM 1 comment:

Fluorine is a powerful nucleus for NMR: it has almost the same sensitivity as 1H and is 100% abundant. 19F NMR based screening is relatively new in the pharmaceutical industry. One of the biggest proponents of this approach has been Claudio Dalvit. In 2009, Dalvit and colleagues (J. Am. Chem. Soc. (2009) 131:12949) proposed the LEF (Local Environment of Fluorine) approach which allows for efficient screening of even weak binding fragments containing fluorine and the discovery of fluorophilic protein environments on the target. Despite the obvious advantages of 19F, it still has not been taken up widely in the industry. A new paper in J. Med. Chem. from Amgen may change that.

In this paper, they demonstrate multiple practical applications of 19F in FBDD, essentially demonstrating congruence for 19F-based methods with 1H-based methods. This is a particularly important as most people are conversant with how to understand and utilize 1H-based data; there is no "re-learning" necessary to adopt 19F based data. One potential obstacle to adoption is the argument that the 19F fragments would not be "fragment-y" or would be unlike other libraries and thus have little cross-fertilization. As shown in the table below, their 19F Fragment library is based on typical Ro3 rules with similar size and diversity.

As can be seen here, this library is relatively diverse. The authors argue that ~30% of "Fragment Space" is covered by this library. But, due to congruency with 1H molecules, this is more than sufficient to give adequate screening hits. 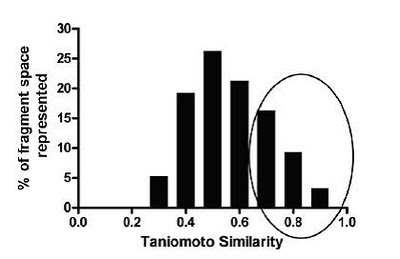 The paper demonstrates the utility of this approach on BACE (one of everybody's favorite targets). In less than 24 hours they were able to screen the entire library and identified five compounds (out of 6 hits) for follow-up. They introduce a method for Kd determination by NMR which cannot be done by 1H-based methods, differential Chemical Shift Perturbation: which utilizes changes in the 19F chemical shifts to determine the Kd. In cases where chemical shifts are not observed, the authors state you can use differences in line broadening as the measurement. This is an interesting and novel approach to Kd determination and they validated this approach by using SPR in parallel. The authors also demonstrate that the Holy Grail of FBDD (simultaneous binding fragments) can be identified and oriented based upon 19F-19F iLOE, exactly analogous to 1H-1H NOEs.

This is an excellent paper, that I hope sparks more people to investigate the utility of 19F-based screening and post-screening confirmation.