Computational docking of fragments can be difficult, partly because the energetic differences between possible binding modes can be so small that it’s impossible to select the best one. In a recent paper in J. Med. Chem. Andrew Good and colleagues at Genzyme ask whether docking results are nonetheless good enough to act on.

The researchers were interested in the kinase Pim-1; we’ve previously highlighted their success using SPR-discovered fragments to generate nanomolar inhibitors of this target. In the current paper, they use the program Glide to virtually screen 13,888 fragment-sized molecules from their general collection against Pim-1. About 3% (462) of these were tested in a functional assay at 125 micromolar concentration, resulting in 46 fragments with IC50 better than 100 micromolar. Five diverse representatives of these fragments were then soaked into crystals of Pim-1, and their structures were compared with those from docking.

Overall, only two of the fragments showed a good correlation between the in silico and crystallographic models (rmsd 1.0 Å or better). However, two of the “failures” do make key hydrogen-bond interactions seen in the crystal structures, though some of the hydrophobic interactions are quite different.

As the researchers note:


Fragments that do not fill their binding pocket can exhibit promiscuous hydrophobic interactions due to the lack of steric constraints imposed on them by the boundaries of said pocket. As a result, docking modes that disagree with an observed crystal structure but maintain key crystallographically observed hydrogen bonds still have potential value in ligand design and optimization.

This seems reasonable, and is consistent with the notion that polar interactions are more directional – and thus perhaps easier to correctly dock – than more generic hydrophobic interactions.

But there may also be something more fundamental going on: the assumption seems to be that the observed crystallographic structures are definitive, but is this an oversimplification? After all, a crystallographically-derived model seldom provides more than one binding mode (though a notable exception led to the first approved fragment-based drug). Perhaps the reason it’s so difficult to score docked fragments is that fragments really can assume multiple binding modes, and our insistence on one single best model is the problem. If this is true, docking models are telling us more about reality than we are giving them credit for. NMR-based models are often presented as an ensemble of structures; perhaps the same should be done for docking? At any rate, NMR studies on Pim-1 with these fragments could prove interesting.
Posted by Dan Erlanson at 7:21 AM 3 comments:

I am sometimes harsh on academic papers, especially those that purport to describe drug discovery. However, Isabelle Krimm and colleagues have continued their excellent work, previously discussed on this blog in a this paper. This paper reads like a "How To" on prosecuting an NMR-based screen. In this work, they have two goals in mind: studying fragments interacting with targets with multiple hotspots and determining the utility of fragments for allostery.

Glycogen phosphorylase is an interesting system to work in: it has an active site and six regulatory sites, including an allosteric site with a variety of positive homotropic and negative heterotropic effects between the various sites. They took 19 known inhibitors that bind to the active site (1-6), inhibitor site (7-9), allosteric site (10-12), and the "new" allosteric site (13-15) and deconstructed them. 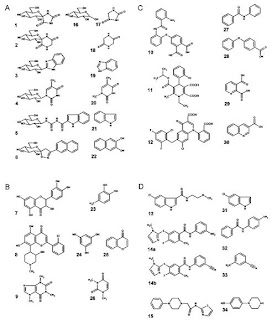 Then they screened these fragments against GPa and GPb using both STD and WaterLOGSY. A compound was only deemed a hit if it was observed to bind via both methods. I find this approach very interesting. STD works via NOE from the saturated target to the bound compound. WaterLOGSY works via NOE from bound water to the compound. Each experiment has advantages and disadvantages, but are they truly orthogonal experiments. As a third experiment, the authors use transfer NOE to confirm binding. I would expect to see at least one truly orthogonal method to confirm binding, such as SPR. They then used competition screening against known inhibitors to bucket their fragments based upon the site they are binding to.

While I don't think the results here are not similar to results achieved in industry many times over, this is an excellent paper that shows the power of NMR in screening and how to apply that to drive answers to target validation and compound bucketing.

This paper leads I think to interesting academic musings. Does ontogeny recapitulate phylogeny for compounds derived from fragments? Does it matter if the fragment is 3D or not? Is there a floor below which a fragment will not bind? Does this floor move if you are using 3D fragments vs. highly planar ones?
Posted by Dr. Teddy Z at 5:20 AM 1 comment:

Besides ligand efficiency (LE), a slew of other metrics has been proposed to help evaluate what compounds to take forward in drug discovery. As seen in our poll and a recent round-table discussion, lipophilic ligand efficiency (LLE) is quite popular:

However, because this metric is not size-adjusted, it is not particularly useful for evaluating fragments, which often have low potency. In contrast, the metric LELP accounts for size:

In a recent issue of J. Med. Chem., György Keserű and colleagues evaluate how these two metrics compare in a variety of settings.

The authors examine eight different compound sets: fragment hits and derived leads, HTS hits and derived leads, leads that subsequently became drugs (ie, “successful leads”), development candidates, compounds that entered phase II trials, and drugs on the market. Not surprisingly, drugs and phase II compounds had better LLE and LELP scores than other molecules. Also not surprisingly, fragments scored misleadingly poorly on the basis of LLE but well on the basis of LELP. What is perhaps unexpected, though, is that LELP was better at identifying successful leads than was LLE. Moreover, when compounds were evaluated for pharmacokinetic and safety parameters, LELP was more effective at predicting problems than was LLE. The authors state:


In summary, evaluation of pharmacokinetic and safety parameters revealed that LELP has benefits over LLE, as compounds with acceptable in vitro ADMET profiles are discriminated from compounds with significant liabilities.

Despite these potential advantages, LELP doesn’t seem to be widely used, perhaps because it is less intuitive than some of the other metrics. Indeed, it would be interesting to see these studies repeated using LLEAT, which also takes lipophilicity into account but has the same scale as LE.
Posted by Dan Erlanson at 7:28 AM No comments:

I’m holding in my hands a book of this title, edited by Thomas Davies and Marko Hyvönen and published this year as part of Springer’s Topics in Current Chemistry series. I believe this is the fourth book entirely devoted to fragment-based drug discovery, which shows both the vitality and rapid development of the field.

The book starts with an introduction to fragment-based drug discovery by me. If you’re new to the field, this chapter should serve as a self-contained summary.

In the next chapter Thomas Davies and Ian Tickle describe how FBDD is practiced at Astex, paying particular attention to the use of X-ray crystallography. Notably, researchers from this company “do not consider a fragment hit to be ‘validated’ and suitable as a starting point for medicinal chemistry until it has been observed to bind by crystallography.” This chapter also contains a nice analysis of fragment library design and a couple case studies, including the discovery of the clinical-stage CDK2 inhibitor AT7519.

Rod Hubbard and colleagues at Vernalis and the University of York next describe their efforts to discover Hsp90 inhibitors using a combination of virtual and fragment screening. We’ve covered some of this before (here and here), but it’s nice to see the full story.

The next chapter also focuses heavily on a single target: Daniel Wyss and colleagues at Merck describe their success in discovering BACE inhibitors. This chapter also includes an excellent review of NMR methods for finding fragments.

Michael Hennig and colleagues at Roche (Basel) contrast the various biophysical methods used to discover fragments, with a heavy emphasis on SPR. Crystallography is also covered, in particular co-crystallization of fragments with protein. Co-crystallization is more time-consuming than soaking fragments into preformed crystals, so compound prioritization techniques such as SPR are especially useful.

One of the most promising applications of fragment-based methods is tackling tough targets such as protein-protein interactions, the subject of a chapter by Marko Hyvönen and colleagues at the University of Cambridge. The chapter contains a nice discussion of energetics and hot spots as well as a detailed analysis of methods to find fragments which complements some of the other chapters.

Eddy Arnold and colleagues at Rutgers discuss the use of crystallographic fragment screening against two HIV-1 targets, HIV protease and HIV reverse transcriptase (RT). We’ve previously discussed the former here. In the case of RT, fragments were soaked into crystals in the presence of a high affinity inhibitor, effectively blocking its binding site from fragments. More than 30 fragments were identified binding to multiple other sites on the protein – one fragment bound at 11 distinct sites! Interestingly, the fragments were enriched for halogen-containing molecules. Several also had functional activity with respectable ligand efficiencies. The authors also discuss other published fragment work on HIV RT.

Finally, Didier Rognan at the University of Strasbourg discusses computational approaches to library design, binding site determination, and predicting druggability. Fragment docking is extensively covered, along with a discussion of what factors contribute to success. It seems that docking is particularly good at identifying negatively charged, relatively buried fragments that make similar hydrogen bonds as the substrate. De novo ligand design, both the successes and challenges, is also covered.

Like last year’s book, all the chapters in this one are published online, but it is worth getting a bound copy as it is nicely put together, with color figures liberally integrated throughout rather than banished to plates at the back.
Posted by Dan Erlanson at 5:46 AM 1 comment: