Richard Silverman, the discoverer of pregabalin, has published a trifecta of papers describing the use of his “fragment hopping”strategy to discover selective, potent, and pharmacologically active inhibitors of neuronal nitric oxide synthase (nNOS).

nNOS is itself part of a triad of closely related enzymes: nNOS, iNOS, and eNOS. All synthesize the radical signaling molecule NO from arginine, but their tissue localizations and functions differ considerably. Both nNOS and iNOS have been pursued as drug targets, with nNOS implicated in a variety of diseases of the central nervous system. However, as eNOS is involved in maintaining blood pressure, identifying inhibitors selective for the desired NOS is essential. Doing so is difficult because all three enzymes share very similar active sites: of the 18 amino acids close to the substrate binding site, 16 are identical, and one of the two residues that vary has its side chain facing away from the substrate binding site.

The Silverman group has been working on selective nNOS inhibitors for over a decade, and succeeded in generating remarkably selective inhibitors, such as the compound shown on the left. But with its peptidic nature and dramatic CLogP, this compound is a long way from a drug. Enter “fragment hopping.” First, a known inhibitor is computationally deconstructed into its minimal pharmacophores; these can be as rudimentary as a positive charge or a hydrophobic spot. Next these virtual fragments are rebuilt into new virtual molecules; further computation weeds out molecules that are likely to be metabolically unstable or toxic. Finally, the best molecules are synthesized and tested. The process is computationally intensive, and I’m simplifying it greatly here, but the results, first published in J. Am. Chem. Soc. last year, are impressive: the dipeptide was transformed into a smaller, more drug-like molecule (center in figure), with increased ligand efficiency. It also retained selectivity over iNOS and eNOS.

In the latest issue of J. Med. Chem., Silverman and colleagues report using the technique again, this time to not only improve potency, but to improve the drug-like properties as well. The resulting molecule (right in figure) still maintains good selectivity, but now also boasts a respectable CLogP. Consistent with this, the molecule shows efficacy in a rabbit model of cerebral palsy. For a great review summarizing the long march to these compounds, check out this just released Acc. Chem. Res. paper.

What I really like about this work is that the researchers use fragment-based methods to actually improve the pharmaceutical properties of their molecules. Much of the focus of FBDD has been in discovery of early leads; these papers show that the approach can be useful downstream as well.

And finally, we can’t let today pass without sending out a Happy 200th Birthday to Charles Darwin (as well as Abraham Lincoln). As Teddy noted in an earlier post, “it’s evolution baby.”
Posted by Dan Erlanson at 4:50 PM No comments:

Here’s an updated schedule of known fragment events this year. Some of these have been previously discussed in more detail (here, and here) and are just highlighted briefly below.

February 26: The New York Academy of Sciences is holding a symposium in New York City on “Molecular Diversity in Chemical Biology and Drug Discovery”, at which I’ll be giving a general talk on FBDD. Please come and introduce yourself!

March 22-26: A full one and a half day session on “Library Design, Search Methods and Applications of Fragment-based Drug Design” is being held at the 237th American Chemical Society National Meeting and Exposition, in Salt Lake City, Utah. There are also a number of fragment-themed talks and posters scattered throughout the conference. ACS meetings are massive, sprawling affairs, but there’s always plenty of great science on tap.

Know of anything else? Let us know and we’ll get the word out!
Posted by Dan Erlanson at 10:06 AM No comments: 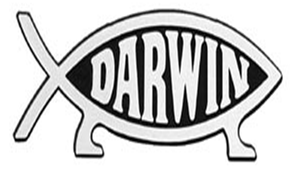 So, after Pfizer announces it acquisition of Wyeth the rumors start to fly. BMS is the winner of the who's next poll at Fiercebiotech...could this by why?

So, it appears likely that Sanofi-Aventis is going to buy BMS creating the world's larger-est pharmaceutical company. Like a senator once said, a billion here a billion there and soon you are talking about real money. Speculation is rampant that Pfizer would not go gently into that good night, of being #2. So, are more deals in the offing?

This is the evolution of the business we live in. If we are lucky, some of us will actually have a job in the future DynaMegaUltiCorp.

Ligand Efficiency (Redux Again and Over...)

There is an excellent recap of the latest literature on ligand efficiency at our friends' place. I read the Bembenek paper, several times, and something inherently bother me about it. 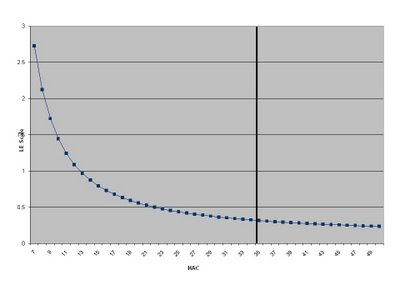 This is what bothers me. An empirically derived weighting function. To me, ligand efficiency makes sense from a physical standpoint. It's a value that measure how well every atom contributes overall to the binding. It makes sense to me that bigger molecules are worse at using their atoms.
This scaling function makes no physical sense to me. Somebody please explain to me (and admittedly I maybe totally miss the point), but please explain why Fit Quality is a better measure than LE from a physical standpoint of the origin of the measures.