A decade of molecular complexity

Molecular complexity is one of the key reasons why fragment-based lead discovery should work. As described in 2001 by Mike Hann and colleagues at GlaxoSmithKline, the idea is that very small, simple molecules are likely to be able to bind to many different sites on many different proteins; think of the water molecule as being an extreme example of this. As molecules become larger and more complex, they are less likely to bind to any given site on a protein, though if they are complementary to a site the potency will be greater. Similarly, more complex molecules are more likely to have a single binding mode than smaller, less-decorated molecules, which could assume multiple orientations at a single site. These intuitive ideas were supported by a simple computational model that suggested that there is an optimum complexity where molecules would be simple enough that they would bind to several different targets (and thus be useful in a screening collection) while still being complex enough to bind in single, defined orientations with sufficient potency to permit detection. Mike Hann and Andrew Leach now have a new paper in Current Opinion in Chemical Biology that analyzes how this idea has weathered the past decade.

A central tenet of the molecular complexity model is that more complex molecules should be less promiscuous (bind to fewer protein targets) than less complex molecules. Although defining complexity is itself complex, the authors summarize a number of studies that examine promiscuity as a function of various molecular properties that could be used as proxies for complexity. Interestingly, many of these studies find that as molecular weight or – especially – lipophilicity increases, promiscuity actually increases, an apparent contradiction of the complexity model. Indeed, Hann and Leach present internal data showing that, for a given molecular weight, promiscuity increases with increasing lipophilicity.

The authors consider several explanations for this, such as the notion that larger, lipophilic molecules may not need to be perfectly complementary to a protein: one portion could bind, while the rest of the molecule remains unbound. One explanation that the authors don’t address but that could account for much of the discrepancy is the validity of the measurements from the studies surveyed. Practical Fragments has previously discussed the issue of aggregation artifacts, which can occur even at nanomolar concentration – well below the 10 micromolar cutoff used in many of the cited studies. Indeed, Brian Shoichet has commented that the majority of hits from HTS screens could be artifacts, and an alarming proportion of "active molecules" in published work are also bogus. Thus, the apparent promiscuity of more lipophilic compounds may reflect merely assay artifacts, not true binding.

In other words, I propose at least two kinds of promiscuity. “Legitimately promiscuous” compounds actually bind to multiple proteins in a one-to-one defined fashion. Perhaps these are rare, in line with the complexity model. “Apparently promiscuous” compounds simply interfere with the assay, whether through aggregation, fluorescence artifacts, or other PAINful mechanisms. Given how many discovery programs get side-tracked by these phenomena, these compounds are likely to vastly outnumber legitimately promiscuous molecules, thus distorting the results of data-mining exercises.

There is plenty more in the paper than can be summarized here, and if this piques your interest Mike Hann will be discussing both molecular complexity as well as molecular obesity at the SLAS webinar series starting next month.
Posted by Dan Erlanson at 7:48 AM 2 comments:

As 2011 winds to a close there is still one more addition to the calendar, and 2012 is shaping up nicely.

August 16 - November 15: Is your travel budget limited? Emerald Biosciences is putting together a series of free webinars related to FBLD on August 16, September 20, October 18, and November 15. If you've missed any they are all archived online.

October 21: Zenobia Therapeutics is putting together a FBLD conference in San Diego. Although just one day, there is a nice lineup of speakers, so try to make it if you can.

April 17-19: Cambridge Healthtech Institute’s Seventh Annual Fragment-Based Drug Discovery will be held in San Diego. You can read impressions of this past year’s meeting here and 2010’s here.

August 19-23: The 244th National ACS meeting will be held in Philadelphia, and there will be at least one symposium on FBLD.

September 23-26: FBLD 2012, the fourth in an illustrious series of conferences, will be held in my fair city of San Francisco. This should be a biggy – the first such event in the Bay Area (and the weather in September is usually decent too). You can read impressions of FBLD 2010 and FBLD 2009.

Know of anything else? Organizing a fragment event? Let us know and we’ll get the word out.
Posted by Dan Erlanson at 12:45 PM 2 comments:

The researchers, all from the University of Washington, Seattle, have been using the technique on internal targets, and their recent paper gives a thorough account of how to do it and describes the results against two protein targets. In both cases, fragments were grouped into pools of 5 to 10 compounds, with each fragment at 0.098 mM and protein at 0.201 mM concentration; these conditions were chosen such that a 1 mM binder would give a 15% reduction in signal, which was roughly 3-fold over their standard deviation for control experiments. The ultrafiltration was done at 4 ˚C in 96-well plates, and the filtrates were analyzed by HPLC using a UV detector (all the fragments contained a chromophore, though the authors suggest that the experiment could also be done using mass spectrometry as a detector).

For the first protein, riboflavin kinase, the researchers found 4 hits out of 134 fragments tested, of which 3 confirmed as single compounds (ie, not in cocktails). Interestingly, these fragments were competed by the enzymatic product flavin mononucleotide but bound more tightly in the presence of the other product and cofactor, ADP and Mg(II). For the other protein, methionine aminopeptidase 1 from the parasite that causes malaria, 10 hits were found out of 243 fragments tested, of which 9 confirmed. The top 6 of these could be competed by methionine, the enzymatic product.

Overall this seems like an interesting method, though I do have one quibble: the authors do not report the activity of these fragments using other techniques. In theory it should be possible to extract dissociation constants from the % reduction in UV signal, and it would be very interesting to see how these values compare to dissociation constants measured using orthogonal methods. Has anyone out there done this?
Posted by Dan Erlanson at 7:19 AM No comments:

Finding fragments is now routine, but how are people doing it? NMR of course has a venerable history, but X-ray crystallography provides higher resolution data, SPR is faster than either, and there are all sorts of other methods. To learn what’s state of the art (and to help me gather some data for an upcoming talk) please vote for what method(s) you’re using. Note that the vote is on the right side of the page, and you can vote for more than one method. 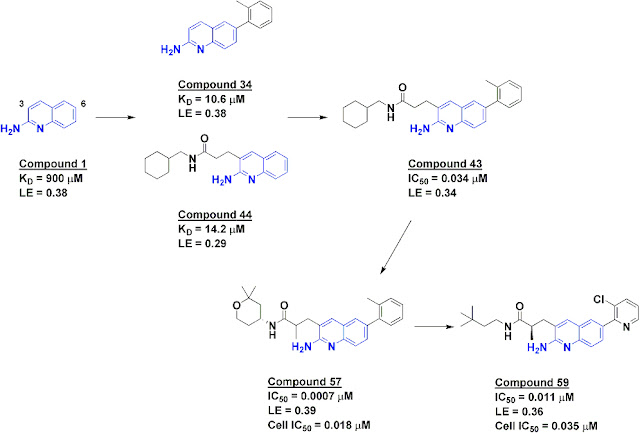 This is also another nice example of starting with a rather generic fragment (heck, one published by another group!) and advancing it to a potent, proprietary series.
Posted by Dan Erlanson at 7:23 AM 1 comment: