Computational screening continues to improve, due in part to a better understanding of the energetics of protein-ligand interactions. But for low affinity fragments, differentiating binders from nonbinders is still challenging. In a recent paper in Nature Chemistry, Xavier Barril and collaborators at the Universitat de Barcelona, Discngine, Vernalis, and the University of York describe a new approach that sidesteps thermodynamics.

The researchers started with the notion that, in many cases, a single hydrogen bond is critical for the stability of a protein-ligand complex. Rather than trying to calculate the binding energy of the complex, they instead ran “dynamic undocking” (DUck) experiments. This involved “steered molecular dynamics” simulations in which the researchers calculated how much work (WQB) is required to move the ligand from the bound state to a quasi-bound state in which the key hydrogen bond is broken. The calculations do not consider what happens under equilibrium conditions (ie, unbinding and rebinding), so WQB should not necessarily correlate with binding affinity. Still, one might expect ligands that require a particularly high energy to dissociate (for example, WQB > 6 kcal/mol) to have higher affinities. This turned out to be the case for ligands targeting several different proteins: the kinase CDK2, the GPCR adenosine A2A receptor, and the protease trypsin. Indeed, receiver operating characteristic curves (an analysis comparing known binders and decoys) showed a significant enrichment of true binders.

Next, the researchers compared DUck with several commonly used computational docking approaches. Again, and not surprisingly, there was essentially no correlation. However, the researchers argue that this is a feature, not a bug, since the very orthogonality of the approaches should provide better predictions: a molecule that docks favorably and has a high WQB is more likely to be a real hit.

This is a nice idea, but does it work in practice? To find out, the researchers turned to the old work-horse protein HSP90 and performed docking experiments on 280,000 fragments. Of the top 450 hits, 139 diverse molecules were chosen for DUck. Several dozen of these were then tested for binding using three different ligand-observed NMR experiments.

Of 21 molecules with WQB > 6 kcal/mol, 8 confirmed as binders by all three NMR methods – an impressive hit rate of 38%. SPR confirmed binding for four of these (with dissociation constants between 0.077 and 0.73 mM), while three yielded crystal structures. In contrast, only one out of 15 molecules with WQB between 3 and 6 kcal/mol confirmed, while none of 11 molecules with WQB < 3 kcal/mol were clear hits. In other words, not only is DUck able to improve identification of true binders, it appears to have a fairly low false negative rate.

In a sense, this approach addresses the question of kinetics. Molecules that dissociate slowly from their target are becoming increasingly fashionable; perhaps DUck can be used to identify them. Although the researchers do not make this claim, several of the authors described an experimental “off-rate screening” approach a few years ago. It will be fun to see further developments, particularly as the method is extended to incorporate information beyond a single hydrogen bond.
Posted by Dan Erlanson at 6:03 AM No comments:

Last September we highlighted two papers out of Novartis in which various fragment-based methods delivered two separate series of low nanomolar inhibitors against the histone methyltransferase DOT1L, an epigenetic anticancer target. The next installment of this story, by Christoph Gaul and Novartis colleagues, has just published in ACS Med. Chem. Lett.

DOT1L uses the cofactor S-adenosylmethionine (SAM), but the previously identified fragments bind in a site adjacent to the cofactor’s binding site. Seeking to gain affinity the researchers decided to look for fragments that bind in the same pocket as SAM. SAM and ATP both contain an adenine ring, and plenty of fragment libraries have been built around the fact that ATP is a kinase cofactor. About 200 kinase-targeted fragments were tested in a high-concentration biochemical screen. Compound 2 was active, and crystallography revealed that it forms multiple hydrogen bonds with DOT1L. More importantly, crystallography also revealed that compound 2 could bind simultaneously with inhibitors occupying the site adjacent to the cofactor binding site.

Modeling suggested that it would be possible to link compound 2 with second-site binder compound 3. This proved successful, with compound 4 having low nanomolar affinity. For aficionados of linking, the free energy of binding for compound 4 is comparable to the sum of the free energies of binding for compounds 2 and 3. This level of additivity is similar to results on different targets at Ariad and Evotec. Interestingly, the two fragments (2 and 3) conform to a previous suggestion from Evotec that – to maximize the likelihood of success in fragment linking – one fragment should be polar and make multiple hydrogen bonds with the protein, while the second fragment should make largely lipophilic interactions.

But the researchers didn’t stop there. Adding a methyl group to the secondary amine on compound 4 improved affinity by more than an order of magnitude, and further tweaking the right-hand side of the molecule led to compound 7, with low picomolar affinity. This compound also showed low nanomolar activity in several different cell-based screens, and was completely inactive against a panel of 21 other methyltransferases. Selectivity against kinases is not shown, and given the origin of the left-hand fragment this could be an issue, potentially complicating the interpretation of biological assays. That said, polypharmacology can be useful, particularly in oncology.

Fragment linking has a reputation for being difficult, but this is another example that it can work. The high affinity of compound 7 is particularly remarkable considering the number of rotatable bonds. Of course, plenty of challenges likely remain: no data are provided for in vitro stability, let alone pharmacokinetics. Although the structure of compound 7 may raise eyebrows, it is worth remembering that even larger, more lipophilic molecules have become successful drugs.
Posted by Dan Erlanson at 6:01 AM No comments:

Among fragment-linking approaches, protein-templated reactions have a special appeal. When two fragments that bind next to one another on a protein react, the protein essentially creates its own ligand. The reaction can be reversible, as in dynamic combinatorial chemistry, though the choice of chemistries tends not to be very drug-like, necessitating replacement of the linker for lead development to proceed. Irreversible chemistries, such as cycloadditions (“click chemistry”), give more stable linkers, but these still tend to be unusual. In a recent open-access paper in Angew Chem., Jörg Rademann and collaborators at the Freie Universität Berlin and Philipps-Univesität Marburg have extended the approach to amides – one of the most vanilla chemistries out there.

The researchers used factor Xa as a model protein. Using information in the literature they designed compound 15, found that it was a low nanomolar inhibitor, and obtained a crystal structure of the molecule in complex with the enzyme. Cleaving one of the amide bonds provides two fragments, compounds 16 and 17, each with very weak activity. Put another way, linking these two fragments leads to superadditivity of binding. 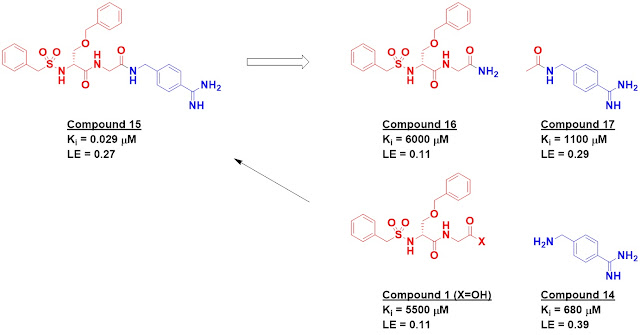 Chemists often make amides by “activating” a carboxylic acid and reacting it with an amine. We usually want this to happen quickly, but here the researchers wanted the reaction to only occur when the two fragments bind next to one another on the surface of the protein.

The team made a dozen activated esters of compound 1 and incubated 5 mM of each of these with 0.285 mM of amine 14, in the presence or absence of 14.5 nM factor Xa. (Each combination of reactants would produce compound 15.) After two hours protein was added to the no-protein controls and fluorogenic substrate was added to all the samples, which were tested for enzyme activity. Not surprisingly, inhibition was complete for particularly active esters (such as 4-nitrophenyl ester), whether or not protein had been present during the incubation. Similarly, the presence of protein also didn’t matter for particularly inactive esters (such as methyl ester): inhibition was minimal because very little product 15 formed. But for two Goldilocks esters (phenyl ester and 2,2,2-trifluoroethyl ester), inhibition was greater when protein was present during incubation.

The researchers used mass spectrometry to quantify the amount of compound 15 formed. For the 2,2,2-trifluoromethyl ester, after 1.7 hours the concentration of compound 15 was 10 nM in the presence of factor Xa, but only 0.15 nM in its absence. (The phenyl ester gave less selective results.)

Of course, as these numbers suggest, product formation could be limited by the concentration of the enzyme, possibly complicating detection. More significantly, even relatively unreactive esters could react with the dozens of nucleophiles on proteins, potentially inactivating or denaturing them. Still, this is an intriguing approach, and it will be fun to see whether it works in more challenging systems.
Posted by Dan Erlanson at 6:14 AM No comments:

Fragments vs BRPFs: A chemical probe

Bromodomains, a type of functional module within proteins, recognize acetylated lysine residues in other proteins to act as epigenetic “readers.” Humans have 61 of them spread across 46 different proteins, and figuring out what recognizes what and in which context has been a major undertaking for the past several years. Fragment-based approaches have proven very successful: Practical Fragments devoted the entire month of last July to bromodomains. In a new paper in J. Med. Chem., a large group of academic and industry investigators led by Paul Fish describe their successful efforts to find a chemical probe for the four members of the BRPF family.

The story actually starts with a fragment screen against a different bromodomain, PCAF, which we discussed last year. Compound 5b was a hit against that target, but bromodomain fanciers will recognize this as a privileged pharmacophore against the target class, and it turned out to be even more potent against BRPF1.

Crystallography confirmed that compound 5b bound in the acetyl-lysine pocket as expected, and also revealed a potential vector for growing, as exemplified by compound 6. Introducing a methyl group led to a 10-fold boost in affinity for compound 7, which as the researchers point out is near the limit of what you can expect for hydrophobic interactions. Further growing ultimately led to NI-42, with low nanomolar potency.

Of course, potency is one thing, but when you’re dealing with dozens of related proteins you really need specificity to understand the biology. Happily, NI-42 was quite selective for members of the BRPF family. Importantly, it has only 4.5 µM activity against BRD4, which can dominate cell phenoytpes when inhibited. The selectivity is actually remarkable given the close structural similarity of NI-42 to PFI-1, which hits BRD4 and which Teddy wrote about here. The researchers suggest that the difference between the N-H in PFI-1 and the N-methyl in NI-42 drives the selectivity – so one could argue that the probe actually makes use of two magic methyls.

NI-42 also showed good cell permeability and target engagement in cells, adequate solubility, decent pharmacokinetics, and respectable oral bioavailability in mice. Although a screen of 211 cancer cell lines did not reveal stunning activity, cell models for other diseases are being evaluated. Also, the researchers have generated an inactive but closely related control simply by replacing both methyl groups with ethyl groups.

This is a lovely fragment optimization story. It is also a useful reminder that, as with phosphodiesterases and kinases, a nonselective fragment can ultimately yield a selective chemical probe.
Posted by Dan Erlanson at 6:09 AM No comments: