In situ click chemistry is a topic we’ve covered before on Practical Fragments. Essentially, two ligands bind near one another on a target protein and react to form a linked molecule. There are several published examples, but it is not clear why it sometimes works and sometimes doesn’t. A new paper in Proc. Acad. Nat. Sci. USA by a team of Japanese and US researchers led by Satoshi Ōmura and Toshiaki Sunazuka at the Kitasato Institute in Tokyo addresses this question.

The researchers had previously discovered potent inhibitors of an antibacterial target enzyme called Serratia marcescens chitinase B, or SmChiB, using in situ click chemistry. In the presence of SmChiB, azide 2 reacts with alkyne 3 to yield triazole 4, which binds 26-fold more tightly than azide 2: 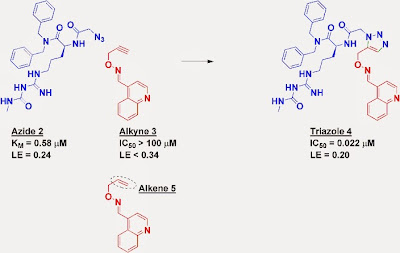 In the new paper, the goal was to use crystallography and computational chemistry to investigate how the reaction proceeds. To avoid azide 2 reacting with alkyne 3 in the crystal and so better visualize starting points, the researchers prepared the closely related alkene 5 mimic of alkyne 3. Unfortunately, due to its (unmeasurably poor) affinity, alkene 5 did not yield a co-crystal structure on its own.

The researchers were able to obtain a co-crystal structure of SmChiB bound to triazole 4 (green carbons below). Surprisingly, a co-crystal structure of azide 2 showed the molecule bound in a quite different orientation. However, a co-crystal structure of the ternary complex of azide 2 (cyan below) and alkene 5 (magenta) bound simultaneously to SmChiB revealed a close overlay of azide 2 with the corresponding fragment in triazole 4. Alkene 5 in the ternary complex adopted two conformations (the electron density is memorably described as resembling “a two-horned goat head”). As shown in the figure below, one of these orientations places the alkene moiety in close proximity to the azide moiety, primed for clicking. 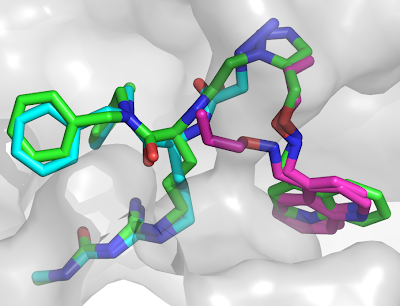 Next, the researchers used this ternary structure to run high-level density functional theory calculations to determine the energetics of the click reaction and compared these with the same reaction run in water. The values were quite similar (if anything, the protein had a slightly higher activation barrier), suggesting that the protein was not directly catalyzing the reaction with specific amino acid side chains. Rather, the reaction was being accelerated simply by the preorganization of the azide and alkyne.

On the one hand, these results aren’t really a surprise: I think most people assumed that in situ chemistry works by bringing the reactants together rather than anything more exotic (with the odd exception). On the other hand, it is nice to see experiment match theory.

More generally, the results help to explain why in situ click chemistry is so challenging. The crystal structure of azide 2 and alkene 5 shows the relevant moieties quite close to each other, yet the reaction is still somewhat inefficient. Finding two fragments that not only bind near one another but are also oriented properly is likely to be a rare event.
Posted by Dan Erlanson at 6:53 AM

Chitinase is an extracellular enzyme complex that degrades chitin and has a molecular mass of approximately 30 kDa. Chitin is degraded to N-acetyl-D-glucosamine in 2 enzymatic reactions. chitinase