Protein-Protein interactions are important to so many physiological processes.  There is mounting literature examples of utilization of fragments to block PPIs.  In this paper, Rouhana et al. show how they approached the PPI of Arno and ARF1, ADP-ribosylation factor (part of the RAS superfamily). Arno is part of the brefeldin A-resistant GEFs and share a 200 amino acid domain called SEC7.  SEC7 interacts with ARF through insertion of ARF switch regions into hydrophobic regions of SEC7.  This interaction is interesting from a ligand design standpoint is very interesting because it does not involved an alpha-helix inserting into the partner's hydrophobic groove.  Rather SEC7 has a rather large interface denoted by "hot spots". 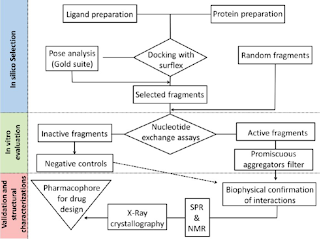 The figure shows their "innovative" FBDD strategy.  First, a Voldemort Rule compliant library was screened in silico.  Since in silico screening is not typically used for fragment screening (but becoming more common) they imposed some initial rules: docking site is small (1-2 residues!), hot spots defined by interaction energy (>1kcal/mol from alanine scan) 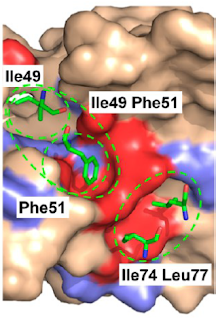 , and very strict selection criteria.  3000 fragments from the Chembridge library were screened.  33 molecules were selected and 40 random fragments chosen as negative controls.

This was followed by a fluorescence assay (2mM fragments) to test their computational results, just as I say you should do.  Promiscuous binders were removed, not by using detergent, but using protein polarization to directly detect interaction with the target.  This seems like over-complexation of an assay, but without knowing the details of system there may be a very good reason for this approach. 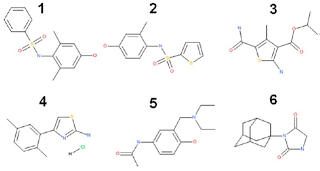 Compounds 1-4 were identifed as inhibitors (35%, 16%, 38%, and 23% inhibition at 2mM respectively) from each of the "hot spots".  I think it is interesting that these compounds were predicted to have affinities of 10uM or better from the docking.  To me, that just illustrates that predicted affinites are rediculous.  Why do people even report them?  Compound 1 had a Kiapp of 3.7mM which is a LEAN of 0.12!  These were then compared to the PAINS list and 3 is "ambiguous".  Compounds 5 and 6 were chosen as negative controls.  SPR confirmed the binding of 1,2, and 4, but at less than stoichiometric binding levels (the assay was run at 250uM).  3 could not be confirmed as a binder.  Does this mean anything for ambiguous PAINS?
STD NMR was then used to confirm binding.  In a nice departure, they actually talk about conditions they used: 10 and 30uM ARNO with 0.1mM and 1mM compounds at 32 and 12C.  30uM ARNO with 1mM fragments @12C was what worked (33x fold excess fragments). Confirming the SPR, compounds 1, 2, and 4 were shown to bind, while "ambiguous" 3 had some binding. Finally, compounds were soaked with fragments 1, 2 and 4.  This led to crystal structures which could then be used for more model building, compound design, etc.  This led to the following compound (1.61mM KiApp, LEAN = 0.13) (the methoxy derivative of 1) for further analysis:

By and large, this is a well done, thoughtful work.  They really understand how to setup and interpret STD-NMR. However, these compounds are really atom inefficient.  Is that a consequence of the type of interaction they are inhibiting?  As a fragment, there is nothing wrong with it.


[Quibble: The authors claim that this is an innovative approach, but I am not seeing it.  They claim their in silico screen first then following up by biophysical techniques is the innovation. ]
Supplemental Information here.
Posted by Dr. Teddy Z at 7:28 AM

You don't want any of these scaffold in a drug. The very first thing you are obligated to do after finding a hit like this is find a suitable drug-like replacement. It makes sense to identify these compounds in the screening pool *before the screen* and remove or replace them with acceptable isosteres so that you can skip this extra step.

I wouldn't use detergent to remove aggregators either. It doesn't seem to correlate very well (in our hands)with known promiscuous hitters or Novartis' ratio test.

Anonymous #1 brings up good points about scrubbing your library of undesirable molecules. While there are some moieties that should absolutely be excluded, for others I think there is room for debate. Regardless, it is nice to see that academic labs are taking PAINS seriously.

Although Anonymous #2 is correct that detergent is not a panacea, it is the easiest way to weed out aggregators. I'd be curious if there is published data to the contrary?