In this paper, Constellation and their partner Jubilant Biosys report on their FBHG effort that lead to BET (bromodomain and Extra C-terminal)  inhibitors (BRD4).  Since this is a letter details are short, so hopefully a longer, more detailed paper will be forthcoming.  What they report is a fragment screen that identified micromolar compounds.  These were then co-crystallized (not soaked) leading to several high resolution crystals.  Of particular interest was this fragment: 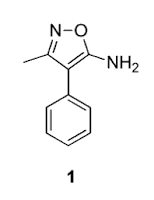 This fragment should ring a bell it is part of the known inhibitor IBET151 from GSK (and is the known preferred binding motif for bromodomains).  Compound 1 binds in a similar fashion to JQ1, binding to the asparagine that recognizes the endogenous Ac-K.  This suggested to them that the isoxazole fragment could replace the triazole of JQ-1.  It's LEAN is 0.34 (33uM) and has a Binding Efficiency of 25.7.  This works describes the replacement of the triazole (Left) with the preferred isoxazole (Right).

Their SAR work is shown in the table below.  They were able to improve biochemical and cellular potency to that of the known inhibitors by replacing the sidechain with a carboxamate (Cpd 3).  the crystal structure of this compound showed similar binding to previously described isoxazoles. 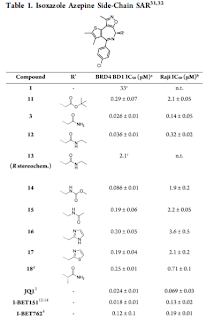 They then went after the 4-chlorophenyl ring to see if they could modify the biophysical and three-dimensional properties of the molecule, while maintaining the potency seen with 3. 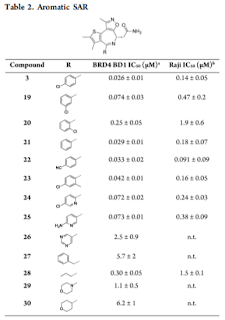 A chloro scan around the ring showed that the o-Cl substitution was 10x less potent, but ortho-Me was tolerated, which led them to believe that it was a steric rather than electrostatic interaction. Overall, there was no better aromatic moiety for this position, and aliphatic moieties were definitely no good.  Compounds 3, 21 (phenyl), 22 (cyanophenyl), and 25 (aminopyridyl) were tested in in vitro ADME assays.  They showed good stability in human microsomes and generally stable (I am not ADME expert, so really what do they mean here?) in rat microsomes.  They showed high plasma protein binding in human plasma but negligible CYP inhibition.  Compounds 3 and 22 (cyano-phenyl) supported further profiling in rat PK experiments.  Compound 3 was superior to 22 and showed adequate exposure in mouse and showed excellent PK in dogs.  They were able to see a dose-dependent decrease of MYC.  MYC suppression was correlated with the amount of compound in the tumor and plasma.

This is a really nice example of how fragments can be used to "scaffold hop", even if the entire scaffold is not changed.  Also, I think, based on the author list, this is a really good example of CRO-client collaboration.  There are many more out there I am sure, I just don't think we are aware enough of them.
Posted by Dr. Teddy Z at 5:48 AM

Surely dull old fashioned medchem could get from I-BET151 to the corresponding isoxazole rather quickly without needing fragments?