Way back when I was but a young lad, I worked on dual inhibitors of 5-LO and PAF in the lab of T.Y. Shen at UVa.  They were crazy compounds, but as an undergraduate it was a great experience.  We even did our own assays requiring fresh whole blood.  I loved it and learned to HATE HPLC assays at the same time.  People still seem to be doing stuff like that.  Overall, the field of leukotriene antagonists has been pretty successful, but it is littered with debris.

Prostaglandin E2 (PGE2) is a key mediator in inflammation, pain, fever, atherosclerosis, and tumorigenesis: a veritable collection of the key therapeutics areas for most pharmaceutical companies.  Arachidonic acid (AA) is acted upon by COX1/2, target for a whole pile of drugs, to generate PGH2.  This is then isomerized to PGE2 by microsomal Prostaglandin E2 synthase (mPGES).  Inhibition of mPGES would be expected to only preclude PGE2 and thus eliminate many of the adverse side effects of COX inhibitors.  As would be expected, mPGES inhibition is not new and several inhibitors are in the clinic.  So, we happen upon this paper: a recent academic effort at a potentially rich field.   The authors begin the explanation of their approach with this:

To date, there is no real three-dimensional X-ray crystal structure of mPGES-1 in the apo form or with an inhibitor bound with exception of electron crystallographic structure complexed with glutathione in its closed state (PDB code:3DWW).

Their strategy is to replace glutathione with non-peptidomimetics via fragments based upon this pharmacophore model (3DWW): two negative ionizable, one HBD, and one HBA 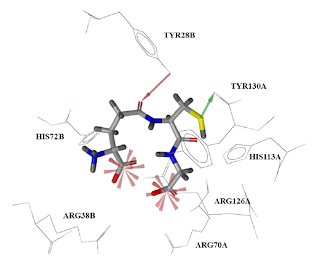 They hypothesized their molecule thusly:

The choice of the triazole is to leverage click chemistry to generate it, while the sulfonamide has been shown to a "privileged" fragment in other drugs. Prior to synthesis, the decided to calculate the binding energies (with three decimal place precision!).

The authors then tested the compounds in a biochemical assay.  The first thing that they noticed is that n=2 for the linker is better than n =1 or 3 (50% increase in potency).  Compound 6f (R1=R2=phenyl) was the most potent (1.1 uM).  However at 29 HAC, its LEAN is 0.21 and would be considered lousy.  It can be argued that lipases and such are going to have relatively inefficient compounds due to the highly hydrophobic nature of the active site. [I completely ignored their discussion of the calculations and modeling, because honestly, does it really matter?] Compound 6f showed ~1000x mPGES-1 selectivity over COX1 and no COX2 activity.  They then (much to Dan's delight I am sure) tested for activity with and without detergent.  Not surprisingly, in the presence of detergent, compound 6f lost significant amount (75), but not all of its activity.  The authors very honestly say:

Therefore, compound 6f may be judged as a partial nuisance inhibitor
of mPGES-1 instead of true mPGES-1 inhibitor.

I would have like them to have tested ALL of their compounds in the presence of detergent to begin with.  This smacks of something that was added in after initial review and honestly really makes the paper uninteresting.  I would really like to know if 6f would still have the outstanding potency from the compounds made, or if some other compound would have aggregated less and thus been of interest.   I would also argue that calling this paper "fragment-based" is a stretch.  As Dan just pointed out, some target classes may just need larger compounds to hit them.

Well, this is only Part 1 according to the paper's title, so there's more to come...