I have been on a bit of a jag lately pummeling academic "Drug discovery".  Dan recently hopped on, in his much more circumspect manner.  My big problem is calling something drug discovery that is not.  I may come off as harshly anti-academic; I am not.  I am pro-good science and even more for the right things in the proper place.  I think this one is one of those.  In this paper, the authors describe their use of fragments to find inhibitors of Mycobacteria.  Thiolactomycin is a natural product of beta-ketoacyl acpM synthase (KAS) from M. tuberculosis, but exhibits broad spectrum anti-biotic activity. While it has rather low potency against M. tuberculosis KAS (200uM, 0.26 LEAN), it has favorable physicochemical properties, low cytotoxicity, high bioavailability, and activity in animal infection models.  This makes it an excellent target for optimization, and considering the activity and lack of selectivity, lots of it!

The authors decided to use inter-ligand NOE to guide their efforts.  This is an approach that has been used previously, and in a case of cosmic togetherness, against a different M. tuberculosis target.  Amzingly, that work is NOT cited in this paper.   As pointed out, iLOE has some issues, aggregation and so on.  The authors do not seem worried by this and instead are interested in utilizing selective iLOE.  One thing the authors do NOT do is include any detergent in their samples.  They synthesized PK940

and used this for the NMR studies.
They were unable to detect iLOEs with mixing times shorter than 500 ms (that's long!) using the standard 2D NOESY, so they used a selective experiment.  This allowed them to shorten the mixing time, increase sensitivity, and solve some other NMR based problems.  [N.B. They had to use 900 MHz to get good enough separation for some of the methyl resonances.  I guess you have to justify that humongous tin can somehow.]  This was able to generate the needed NOE data to put into a model to give them an idea on how to make compounds, suggesting elaboration of the thiolactone at the 3 or 4 position (A below). 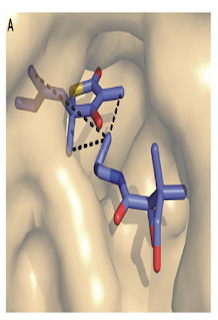 They started to explore these hypotheses, and found that activities were all within 2x fold of the original.  So, unlike others, they decided this was flat SAR. Although they do make some conjectures that would seem to be easily testable (FOLLOW UP PAPER?). None of the compounds were significantly better than the lead and many in fact lost the "slow onset" binding that is considered important for good PD.  There is nothing really ground breaking here, but what I like about this paper is where it was published Journal of Biological Chemistry, not Journal of Medicinal Chemistry.  This is where these types of papers belong.  As I keep on saying, your computation is only as good as your follow up.  In this case, the computation is to support the NMR and not the other way around.
Posted by Dr. Teddy Z at 4:54 AM

Should read "is a natural product inhibitor of..." Thanks for the catch.