Epigenetics is one of the hot new areas for drug research.  It seems like every company has several targets among the bevy of readers, writers, erasers out there. We have blogged about this previously.  Now, as the field sees more and more players, more and more papers are appearing describing various drug discovery efforts, largely on bromodomains, the readers.   The current state of the art for bromodomain compounds, is shown below.  FBDD approach and led to Cpd 4b of modest potency.   In this paper, the authors aim to diversify the range of scaffolds for bromodomain inhibition. 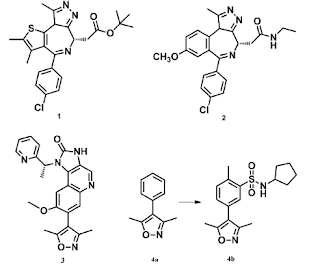 Cpd 1 is the famous JQ1, cpd 2 from GSK has a very similar scaffold to JQ1, Cpd 3 from Oxford and GSK has the 3,5-dimethylisoxazole scaffold and acts as a AcK mimic (like DMSO), Cpd 4 is from a

This group describes how they put together their fragment library (which is a detail that is often lacking in papers).  Starting from the ZINC database, they applied the following filters: 1. MW < 250 (HAC<18 1="" 2.="" 3.5="" 3.="" 4.="" 5="" bonds="" logp="" rotatable="" u=""><
smallest set of smallest ring<4.  [I have no idea what this last filter means, I have reproduced it faithfully and maybe somebody can tell me what it means in the comments.]  They then clustered the compounds with a Tainomoto cutoff of 0.7 and the center (centroid?) of the cluster was chosen to represent the clusters.  They then applied the "Reality Check" and had a real person look at the compounds and 500 were chosen, with 487 being purchasable.  The authors state that some of their compounds do not obey the Voldemort Rule.  Good for them!  More people should.  They then spend several sentences defending this choice.  Shame on the reviewer who made them.  The properties of their library are presented graphically. 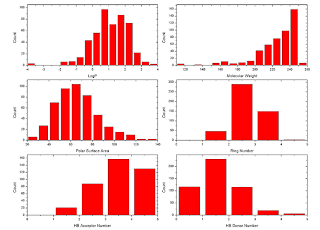 They started by docking their fragment against the JQ1 structure of BRD4.  All binding conformations were assessed for their interaction with Asn141.  41 Cpds were then put into co-crystallization experiments, they obtained 60 crystals which were diffracted.  Four of these fragments are exemplified below. 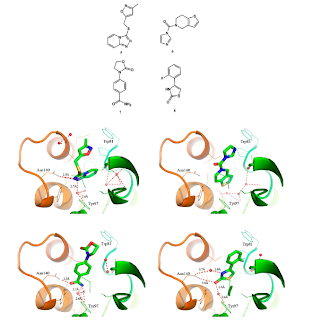 It is satisfying to see that four different moieties bind in the roughly same location with similar orientations.  Compound 8 was chosen for further optimization, but with no explanation.  The end up with Cpd 40a which is a 0.23 uM inhibitor (LEAN = 0.26), compared to > 100uM for the parent fragment.


The authors then performed PK testing, reasoning that bad PK here should kill the whole series, while also cautioning that PK does not necessarily extend to all the compounds in a series.  40a (and the parent compound) showed cleaned metabolic stability and stability in human microsomes.  40a also exhibited inhibition of several CYPs at < 50% at 10uM, reinforcing the metabolic stability.  They finally looked at the cellular activity.  They found that compound inhibition is not well correlated with anti-proliferative activity.  Reviewing the compounds used in this assay they found that logP was crucial here, lower logP means better anti-proliferative activity.  PSA did not correlate.

This is an nice paper, not only for showing the range of chemical diversity that can be identified in this target class, but because it gets to several important questions that are being discussed here and in the LinkedIn group.  Namely, what should your library look like and how to screen it?  I applaud them for not being hide-bound to the Voldemort Rule.  As recently mentioned, there is a difference in how X-ray and NMR view fragments.  X-ray being notably different by requiring high occupancy.  In this field, using X-ray makes a lot of sense because it reduces the likelihood of false positives due to such things as DMSO binding.

Responding to Teddy's query, it looks like they require all of the fragments to contain at least one ring, but no more than four.