The two human tankyrase isoforms, TNKS1 and TNKS2, are members of the PARP family of proteins, which has received considerable attention as a pool of potential anticancer targets. In a recent paper in J. Med. Chem., a team of researchers from Sweden and Singapore use fragment-based methods to discover potent, selective inhibitors of the tankyrases. This is a nice example of FBLD from academia.

The researchers used differential scanning fluorimetry (DSF) to screen 500 fragments at 1 mM concentration each against TNKS2. In this assay, the protein is mixed with a fragment and a fluorescent dye that binds to the denatured form of the protein. When the mixture is heated, fragments that bind the protein should stabilize it against thermal denaturation. Thus, fragment binding can be detected by an increase in melting temperature (which is itself inferred by an increase in fluorescence). As noted previously, people have very different opinions of DSF; some folks swear by it, while others find that it produces too many false positives and negatives.

The present paper is an excellent resource for those wanting to try DSF for themselves; it provides clear experimental details and discussion of some of the things that can go wrong. One recommendation is to validate hits from the initial single-point assay by running dose-response curves over a wide concentration, such as 5-4000 micromolar. Another interesting tip is to add the protease chymotrypsin to the mix; doing so gave cleaner data, presumably by chewing up mis-folded contaminants.

The 500-fragment DSF screen identified two fragments against TNKS1, both of which were characterized crystallographically. The researchers chose to pursue fragment 2 since the structure suggested that this had good vectors for growing. Interestingly, removing the methyl group caused a complete loss in activity – another example of the power of methyl groups, and a sobering reminder of how subtle changes could make the difference between finding a fragment or not.

Fragment 2 was already quite potent, and adding an aryl substituent as in compound 11 further increased activity. Replacing the fluorine with a chlorine was even better, but at the cost of solubility, so the researchers added solubilizing groups and obtained potent, soluble molecules such as compound 17. Compounds 11 and 17 were also soaked into crystals of TNSK2, and the resulting structures overlay nicely with each-other as well as with the structure of the initial fragment. 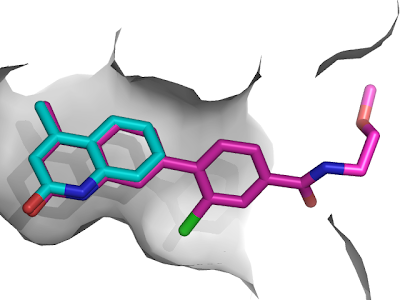 Dissociation constants and kinetic parameters of the more potent molecules were determined by SPR, and although in general improvements in affinity were driven by decreases in koff rates, kon rates started to play a role with the more potent compounds. In another nice vindication for DSF, the thermal shift correlated nicely with both the IC50 and Kd values.

Compounds 11 and 17 bind differently than other PARP inhibitors, so the researchers tested compound 11 against six other PARPs and found it to be quite selective. In fact, it is even 16-fold selective for TNSK2 over TNSK1. While that property may ultimately not be desirable in a therapeutic, it should be useful for exploring the biology.

Overall this is a lovely piece of work, and it does make a good case for the utility of DSF. The fragments identified are quite potent; perhaps the technique really shines at finding these exceptional fragments.
Posted by Dan Erlanson at 7:18 AM

I am very interested in the chymotrypsin angle. In my experience screening fragments against a panel of proteases, Chymo was a sponge. It was more promiscuous against fragments than just about any other protein bu BSA/HSA.