G protein-coupled receptors, or GPCRs, have been one of the most fruitful areas of drug discovery. Humans have 390 of them throughout the body (plus many more in the nose, where they are essential for smelling), and almost a quarter of new drugs approved in the past decade target GPCRs. Despite these successes, there are plenty of “difficult” GPCRs that have resisted drug-discovery efforts. Since GPCRs are membrane-bound proteins, crystallography has until very recently been all but impossible, making structure-based design and fragment approaches correspondingly more difficult. In a recent issue of J. Med. Chem., John Christopher and colleagues at Heptares Therapeutics describe their success against one member of this target class (see also here for In The Pipeline’s coverage).

Fragments have been screened against other types of membrane proteins using surface plasmon resonance (SPR) and TINS, but one of the particular challenges of GPCRs is that they are generally quite unstable and conformationally flexible. Heptares solves this problem by making a small number of targeted mutations to increase receptor stability and lock the conformation. In this case, the researchers targeted the human β1-adrenergic receptor (β1AR); both agonists and antagonists of β-adrenergic receptors are approved drugs.

Approximately 650 fragments were screened using SPR against the stabilized human β1AR as well as another GPCR, the adenosine A2A receptor. Selective hits were identified against both targets; among the β1AR-selective hits were compounds 7 and 8, both with impressive affinities and ligand efficiencies. 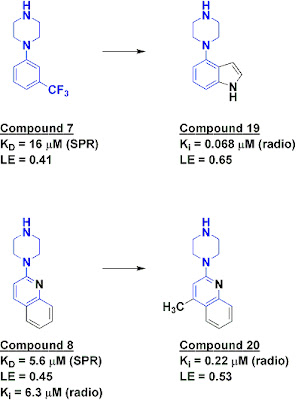 Co-crystal structures of various ligands bound to turkey β1AR (which is identical to its human counterpart in the ligand binding domain) had previously been solved, and molecular modeling of the fragment hits led to the purchase of a set of analogs, which were then tested in a radioligand membrane binding assay. Happily, compounds 19 and 20 both bound with improved affinity over the parent fragments. Crystal structures of these new molecules in complex with turkey β1AR were also determined, revealing that they do not completely fill the ligand-binding pocket, and suggesting additional modifications to further improve potency and alter their pharmacology.

There are still many unanswered questions. Phenylpiperazines such as these are unusual ligands for β-adrenergic receptors, but they are known to bind other GPCRs, so selectivity will need to be investigated thoroughly. Also, the researchers don’t say whether their molecules are agonists or antagonists, though they suggest the later. Some of this work was publicly presented as early as 2010, so presumably there is plenty more data beyond what’s reported here.

All that said, this is a nice milestone in fragment-based ligand discovery, and it will be fun to see how crystal structures play a role in understanding (and drugging!) this important class of targets.
Posted by Dan Erlanson at 6:17 AM