A big problem with small fragments is that they usually have low affinities for their targets; there is only so much binding energy you can pack into a dozen or so heavy atoms. Indeed, it wasn’t until the rise of sensitive biophysical methods such as NMR that fragment-based lead discovery really took off. But what if you could increase the affinity of fragments themselves?

One way to increase affinity is by introducing a covalent bond between the fragment and the protein: an irreversible covalent bond will, by definition, keep a fragment from ever dissociating from the protein. However, with this type of interaction, it may be difficult to distinguish between fragments with different inherent binding energies: iodoacetamide will alkylate every exposed cysteine residue, even though acetamide itself may have no inherent binding affinity. What you really need is a reversible covalent bond: something just strong enough to improve the affinity for the target, but still allow you to define structure-activity relationships among different fragments. This is the principle behind Tethering, which relies on (reversible) disulfide bonds between fragments and the amino acid cysteine. In a recent communication in J. Am. Chem. Soc., Jack Taunton and coworkers at UCSF apply a different chemistry to discover potent and selective kinase inhibitors.

Among the 518 human protein kinases, there are many non-conserved cysteine residues. Indeed, several advanced clinical candidates target a cysteine found just outside the ATP-binding site of certain kinases. These candidates are potent molecules in their own right, with irreversible covalent “warheads” attached to permanently knock out the kinases.

The UCSF researchers instead started with simple fragments (molecular weights between 96 and 250 Da) found in non-covalent kinase inhibitors. Each fragment was derivatized with a cyanoacrylamide moiety that could form a reversible covalent bond with cysteine residues, and these were screened against three of the eleven kinases that contain a cysteine residue at a certain spot within the active site. Remarkably, all showed activity against at least one of the kinases, though there were very different selectivities. Mutation of the targeted cysteine residue dramatically reduced affinity in all but one case, as did removal of the cyanoacrylamide.

Crystal structures of two fragments bound to the C-terminal domain of the kinase RSK2 were determined. In the case of compound 1, the indazole made the expected interactions to the so-called hinge region of the kinase. Interestingly, though, in the case of fragment 8, the azaindole moiety does not bind to the hinge. Instead, the ketone moiety serves as a hydrogen bond acceptor. Overlaying the two fragments suggested that adding an aromatic substituent to the indazole could improve affinity, a hypothesis that was nicely validated by compound 11. Addition of another small moiety gave compound 12, with improved selectivity over the kinases NEK2 and PLK1. 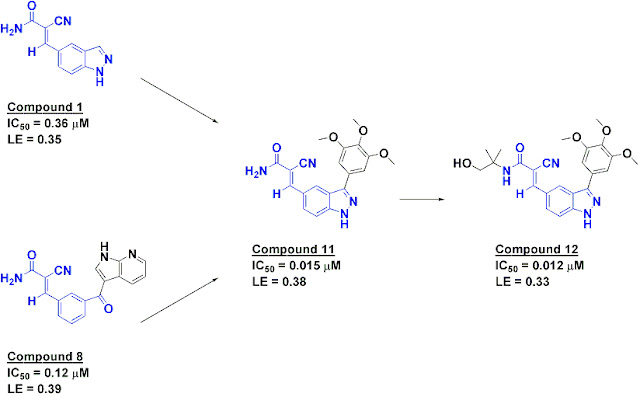 Compound 12 was tested against a panel of 26 kinases, 12 of which have active-site cysteine residues, and was found to be selective for RSK2 against all but NEK2 and PLK1 (and even then, the compound was more than 40-fold selective for RSK2). Crystallography confirmed the binding mode, complete with covalent bond to the cysteine residue, and mass-spectrometry of the denatured protein confirmed that the covalent bond is reversible.

One of the attractive features of the cyanoacrylamides is that they are quite stable, and in fact compound 12 showed respectable cell-based activity against RSK2 as well as the closely related C-terminal domain of the kinase MSK1, for which no inhibitors had previously been reported.

All in all this is a nice approach that should be broadly applicable not just to kinases but to a wide variety of targets. At least some of this technology has been licensed to Principia Biopharma, so it will be fun to watch this story progress.
Posted by Dan Erlanson at 7:56 AM