Renin, an aspartic protease involved in regulating blood pressure, is one of those drug targets that has been around forever; it took decades before the first direct inhibitor was approved. In a recent paper in J. Med. Chem., Daniel Baeschlin and colleagues at Novartis (where the approved drug was discovered) describe how they’ve taken a fragment-merging approach to look for additional inhibitors of this target.

The researchers started by assembling a small (113 compound) fragment library designed to target aspartic proteases. This was screened against renin by NMR, resulting in hits such as compound 3. Although these were too weak to yield dissociation constants or IC50 values by NMR or biochemical screens, the researchers were able to obtain crystal structures of at least two of these fragments bound to renin, including compound 3. Interestingly, although the amino alcohol moiety of this compound was designed to target the catalytic aspartic acids, this turned out not to be the case. Instead the binding appears to be largely driven by hydrophobic contacts between the tricyclic moiety of the fragment and the so-called S3-S1 pocket of the protein. 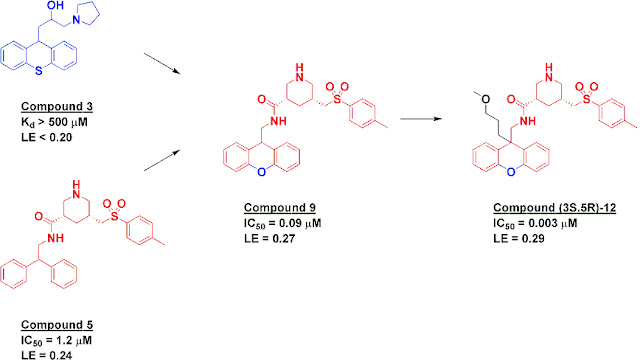 Along with the fragment effort, the researchers also undertook an HTS screen, resulting in the discovery of compound 5, which itself had come from a 950-compound library targeted towards aspartic proteases. Crystallography revealed that this molecule binds with the diphenylmethane moiety in a similar position as the tricycle of fragment 3, and indeed when a rigid tricyclic framework was grafted onto compound 5 the resulting compound 9 showed a satisfying boost in potency. Further optimization led to a pure enantiomer of compound 12 with low nanomolar potency, good selectivity, moderate oral bioavailability and efficacy in rats, though it did also show some time-dependent CYP3A4 inhibition.

This is really a structure-based design paper, and there is obviously much more detail than would be appropriate here. What caught my eye is that it is a nice example of fragment-assisted drug discovery, in which fragment information is used as one aspect of an overall lead discovery program. In this case a cynic could argue that the only bit that came from the fragment was the tricylic motif. However, given the limitless number of analogs that could be made, such information can be both unexpected and valuable.
Posted by Dan Erlanson at 6:25 AM