GPCRs seem to be popular around here lately.  In this paper, a group of researchers in the UK developed a report-fluorescent assay to be used on living cells to screen fragments.  Recent advances have been made in structural studies of fragments (see Receptos and Heptares) and with this new assay, the entire suite of experiments for prosecuting FBHG exist for GPCRs.  As the authors point out, and I mentioned here, mucking around with GPCRs with things like detergent stabilization removes ancillary proteins which can provide allosteric interactions. As the authors state:

It is now acknowledged that GPCRs can adopt multiple active conformations as a consequence of protein-protein interactions that can lead to the activation or attenuation of different signaling pathways.  Furthermore, different agonists appear able to bias signaling in favor of a particular downstream pathway, including those that do not involve heterotrimeric G proteins . It is also clear that the binding affinity of antagonists can vary depending on the signaling pathway and agonist that is being studied. These data suggest that intracellular signaling proteins can elicit marked allosteric influences on the binding of both agonists and antagonists to a particular GPCR and as a consequence the cellular context in which binding affinities are measured will have a major impact on drug screening strategies. [Emphasis mine].

To build their assay, they used an existing fluorescent existing amine congener that was commercially available and ensured that it had competitive, antagonistic properties against A3AR (Adenosine-A3 receptor).  It exhibited many desirable characteristics for a high-content screening: including high affinity and slow off-rate.  It was able to quantify agonist displacement from A3AR.

To test for the ability to detect weak binders, they deconstructed the high affinity A3AR antagonist (1) into its component fragments (2-7) [the affinity values are pKi].  They then acquired a 248 subset of the Maybridge fragment library that was Voldemort Rule compliant.

They found 38 confirmed actives, with the compounds shown below as the top 6: 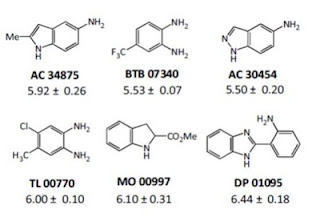 To me, the interesting part of this paper is NOT the subsequent SAR and the novel compounds that resulted, but instead the fact that there is now an assay for A3-and A1AR that can reliably detect fragments and support SAR studies.  Of course, one major caveat here is something that I learned from a venerable GPCR chemist at Lilly: the natural ligands of GPCRs are fragments, so of course fragment screening works.  I think most people who work in fragments would be very happy with 1 microM actives from a screen; I think most GPCR chemists would not.  I would also imagine that ligand efficiency is even more important when working in this class of compounds.

This is nice, though as with the Heptares paper the focus is on potent fragments, with low micromolar (or even high nanomolar!) affinities. That's great if such fragments exist, which (as Teddy points out) is likely to be the case for many GPCRs. However, for more difficult targets such as the Class B GPCRs it is hard to find any tight-binding small molecules, let alone fragment-sized ones.

This paper does demonstrate that it is possible to find fragments with lower affinities, though the weakest fragment with a reported dissociation constant comes in at 500 micromolar, and in that case the curve is not complete.

Still, it is nice to see more people trying to advance fragments in the absence of structural information.

Hey thank you guys for your informative (and frequent) posting. I don't work on fragments but I enjoy reading. Hope you keep it going.