The fourth iteration of our fragment-finding methods poll has just closed. If you want to jump right to the results feel free to skip the next paragraph, which focuses on methods.

Readership demographics have shifted from previous years, with about two thirds of respondents hailing from industry, up from just over half historically. The fraction of respondents who actively practice FBLD is also up modestly, to 85%.

But the question probably of most interest is on screening methods, summarized here. 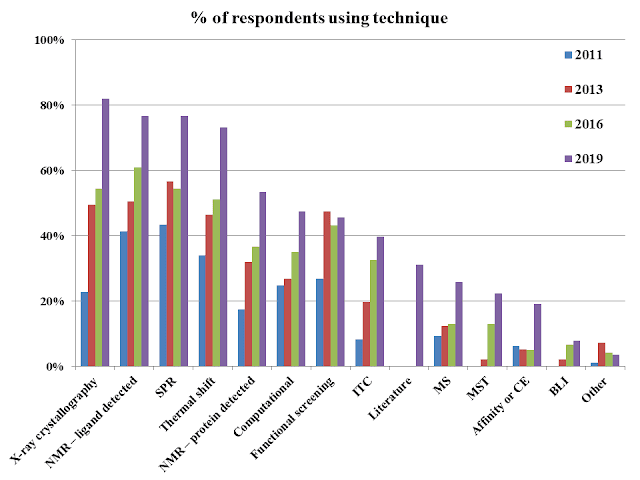 X-ray crystallography has leapt to first place, likely driven in part by increasing speed and automation as well as by studies suggesting that crystallography can give impressively high hit rates.

As in 2016, ligand-detected NMR, SPR, and thermal shift assays are all very popular. Use of computational approaches has increased, though perhaps not as much as might be expected given recent advances. Functional screening is the only technique for which use has remained constant, or perhaps even declined very slightly from 2013.

For the first time we asked about use of literature to identify fragments, and nearly a third of respondents said they incorporate previously published fragments into their work. As the amount of publicly available information continues to increase it will be interesting to see whether this number grows.

More niche methods such as mass spectrometry, MST, affinity selection, and biolayer interferometry are gaining adherents; 30 respondents reported using mass spectrometry, for example. While fewer than 20% of respondents are using affinity chromatography (including WAC), CE, or ultrafiltration, that proportion has nearly quadrupled from our previous three polls, though we can’t say which of these related methods accounts for the increase.

Finally, only four respondents reported using “other” methods, such as SHG. Perhaps we’ll ask about this and other emerging methods explicitly next time.

Do the results surprise you, or are they consistent with what you are using at your organization?
Posted by Dan Erlanson at 6:26 AM

Looks like many people using a combination of screening methods, is this related to the type of target or do people simply use multiple methods in parallel?

Hi Chris,
I think it's both - we touch on this topic a bit in a recent review
Cheers,
Dan