Earlier this year we highlighted the discovery of AZD5991, a phase 1 compound from AstraZeneca that inhibits the anti-apoptotic cancer target Mcl-1. Those efforts made use of a fragment previously published by a different research group. Mcl-1 has been a popular target for some time; the first mention on Practical Fragments dates to 2010. The story behind another investigational drug is described in a couple papers from earlier this year.

The first, in ACS Omega by Rod Hubbard and colleagues at Vernalis, University of York, and Servier, describes fragment screening efforts against both Bcl-2 and Mcl-1. The proteins are related both structurally and functionally, and Bcl-2 is the target of venetoclax – the second fragment-derived drug approved. Some of the early fragment hits bound to both proteins, but selective and potent inhibitors were ultimately developed. In the interest of space only those against Mcl-1 will be discussed here.

Both proteins required considerable protein engineering, which is described in detail. Ultimately one form of human Mcl-1 was used for crystallography, while mouse protein was used for NMR screening due to its better stability. A total of 1064 fragments were screened at 0.5 mM each (in pools of eight) using ligand-observed NMR; 39 confirmed using STD NMR, WaterLOGSY, and CPMG. Additionally, fluorescence polarization, 2-dimensional (HSQC) NMR, ITC, and SPR were used to validate hits. Crystallography proved challenging in the beginning but ultimately helped drive optimization of more potent molecules. The large number of different assays employed is consistent with our recent poll results.

Protein-observed NMR was particularly useful in providing information on the quality of both the ligand and protein (reminiscent of the “validation cross” discussed here). Before crystallography was able to play a meaningful role, “NMR-guided models,” combining partial protein assignments with flexible docking, were used to drive SAR. 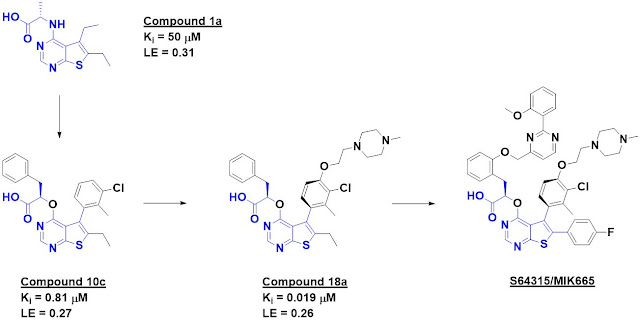 While the first paper focuses on protein optimization and biophysics, the second (in J. Med. Chem.), by András Kotschy and collaborators, focuses on chemistry. Fragment 1a was one of several hits pursued, initially by looking for analogs, but most of these had comparable (weak) activity. In the absence of a crystal structure a systematic chemistry campaign was conducted, varying elements of the core and sidechains. Many of these molecules had comparable activity against both Mcl-1 and Bcl-2, but replacing the nitrogen linker with an oxygen led to selectivity against the former. The addition of hydrophobic substituents led to compound 10c, with submicromolar activity.

Anticipating poor cell permeability for a negatively charged, lipophilic molecule, the researchers introduced a positively charged methylpiperazine moiety at various positions around the molecule, ultimately leading to compound 18a. In addition to potent Mcl-1 binding, this molecule is active in cells and shows reasonable pharmacokinetic properties in mice. Further optimization to S64315 does not appear to have been published yet, though the structure was disclosed earlier this year, and the fragment origins remain clear.

Together these papers provide a thorough description of drugging a difficult target. They also provide insights into the investment required. The Mcl-1 project began around 2007, and it took a decade before S64315 entered the clinic. Enabling drug discovery against protein-protein interactions required multiple biophysical techniques in addition to all the standard components of pharmaceutical research. The researchers note that “establishing such a platform can take some time and resource – a tool compound is usually needed to validate the assays, but the assays are needed to identify the tool compound.” In the end they have succeeded, and Practical Fragments wishes them – and the patients being treated – the best of luck.
Posted by Dan Erlanson at 5:45 AM