Blood clotting is something we’re all familiar with, but the details are devilishly complex; lots of different proteins play a role. Physiologically this makes sense: the many components make for a finely tuned system, and you want clotting to happen when it needs to and then stop. Start too late and you might bleed to death. Start too early (or don’t stop) and you could develop a fatal clot. Not surprisingly, lots of things can go wrong, and many of the enzymes involved are drug targets. In a paper recently published in PLoS One, Ola Fjellström and colleagues at AstraZeneca describe their efforts on one of these.

Factor XI is involved in the “amplification phase” of coagulation, and the activated form (FXIa) is a potential antithrombotic and profibrinolytic target. A high-throughput screen had failed to find anything useful, so the researchers turned to fragments.

The team started with a computational screen of 65,000 in-house compounds with molecular weights < 250 Da. They used Schrödinger’s Glide software and previously determined crystal structures of the protein. The top 1800 fragments were then tested using ligand-detected NMR in pools of 6, with each fragment present at 0.1 mM. The researchers were trying to avoid strongly basic compounds, and they found 13 hits with calculated pKa< 9. Next, 600 structurally related analogs of the hits were screened, resulting in 50 hits total. These were then triaged using inhibition in solution (an SPR technique described here) and taken into crystallography trials. Two fragments gave high-resolution structures and were prioritized. Satisfyingly, the two fragments bound as had been predicted by the initial virtual screen.

Fragment 5 was particularly interesting because it had never been observed as a hit in the S1 pocket of a serine protease. Many enzymes in the coagulation cascade share a conserved S1 pocket. This has a predilection for highly positively charged species, so the neutrality of this fragment was attractive. 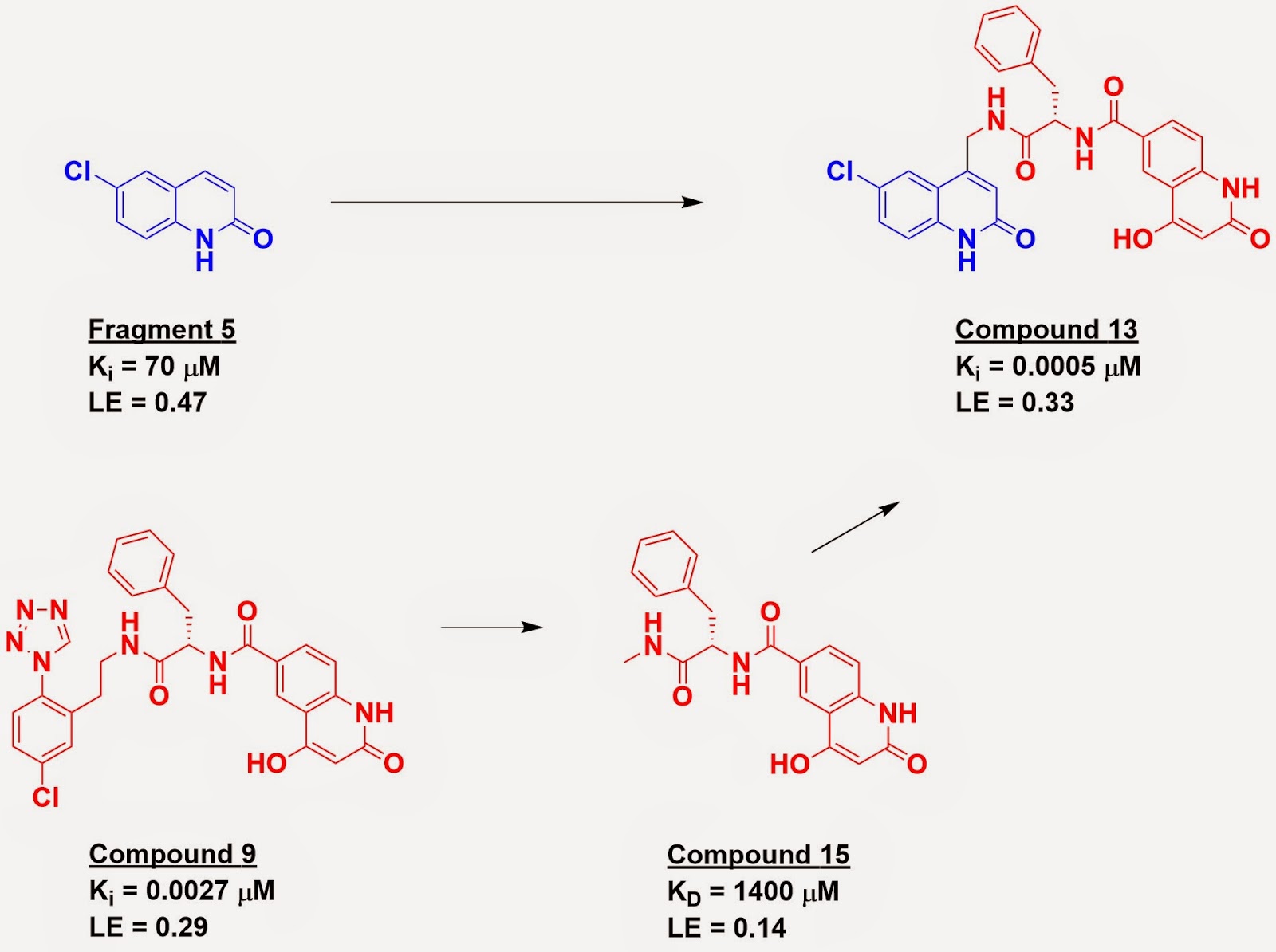 Separately, the team found a Bristol-Myers Squibb patent application describing compound 9, which they made and characterized crystallographically. The structure suggested merging a portion of compound 9 with fragment 5, and the resulting compound 13 turned out to be one of the most potent FXIa inhibitors reported.

To better understand the system, the researchers took a deconstruction approach to compound 9, testing the portion (compound 15) that had been used in the merging. This bit has low affinity by itself. Yet, when linked to fragment 5, the resulting compound 13 binds roughly 200-fold more tightly than simple additivity would predict. Similarly dramatic fragment deconstruction results have been reported previously for the related enzymes factor Xa and thrombin.

Unfortunately compound 13 has fairly low membrane permeability, high efflux, and high clearance in rats, though preliminary SAR suggests this is the fault of the Bristol-Myers Squibb piece rather than the new fragment. At any rate, this is another nice example of using fragment screening to replace one portion of a known molecule with a new fragment.
Posted by Dan Erlanson at 5:50 AM