Two years ago we highlighted a paper in which Cambridge University researchers identified fragments that bind to the protein RAD51, which in turn binds to the protein BRCA2 to protect tumor cells from radiation and chemotherapeutics. In a new paper in ChemMedChem, Marko Hyvönen and colleagues describe how they have grown these fragments into low micromolar binders.

One of the best fragments identified in the previous work was L-tryptophan methyl ester (compound 1), so the researchers naturally tried substituting the methyl group. A phenethyl ester (compound 5c) gave a satisfying 10-fold boost in potency, but this turned out to be the best they could get: shorter or longer linkers were both less active, and modifications around the phenyl ring gave marginal improvements at best. Also, changing the ester to an amide decreased affinity. They were, however, able to improve potency another order of magnitude by acylating the nitrogen (compound 6a). 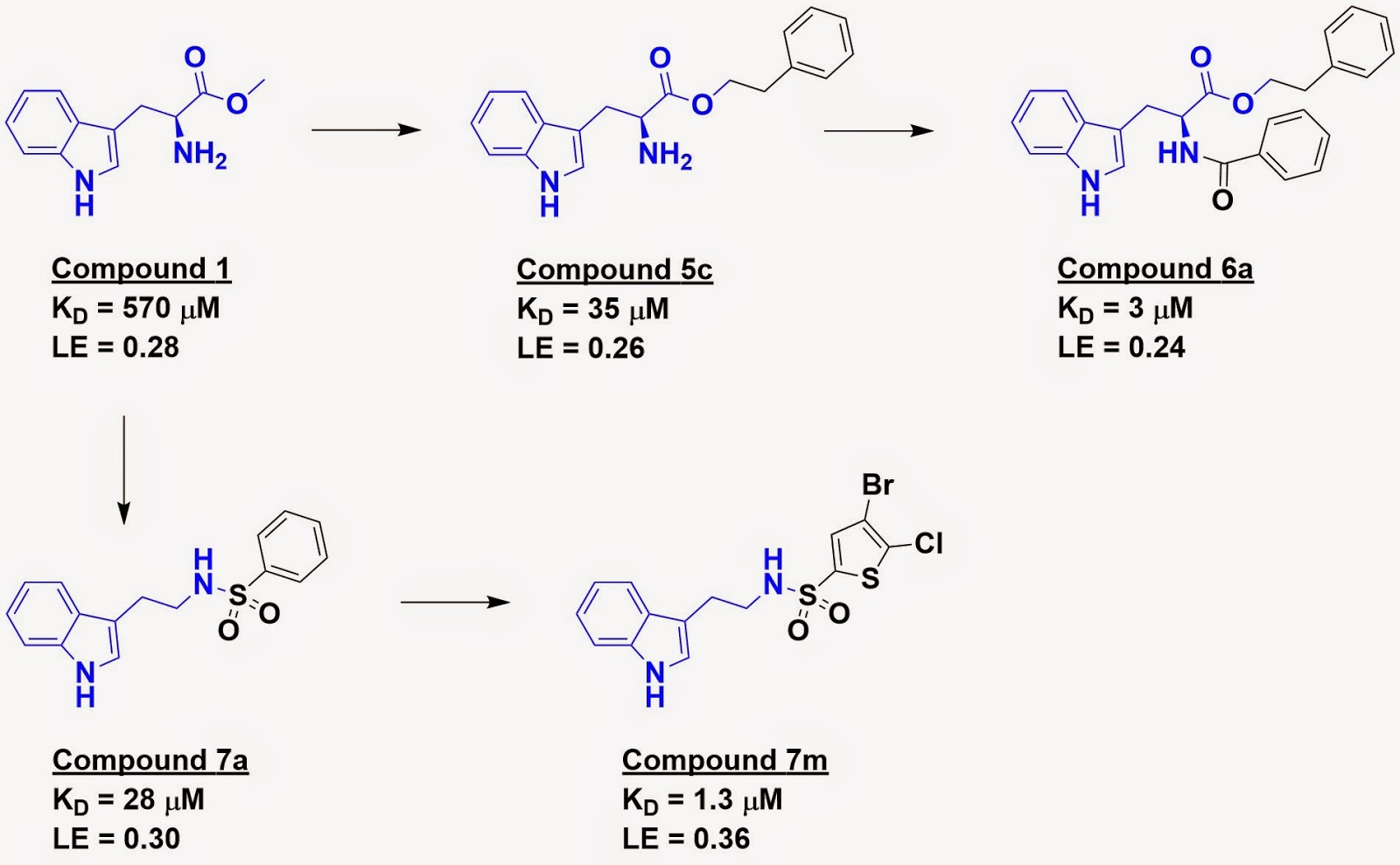 At the same time, the researchers made a more radical change to the initial fragment by keeping the indole and replacing the rest with a sulfonamide (compound 7a). This also boosted potency. Further optimization of the sulfonamide substituent improved the affinity to low micromolar (compound 7m) and increased ligand efficiency as well.

The original fragments had been characterized crystallographically bound to the protein, but the researchers were unable to obtain structures of the more potent molecules, though they did sometimes see tantalizing hints of electron density. Competition studies with known peptide inhibitors also suggested that the molecules do bind in the same site as the initial fragments.

The thermodynamics of binding were characterized using isothermal titration calorimetry (ITC). Although the initial fragments owed their affinity largely to enthalpic interactions, the more potent molecules were more entropically driven. This, the researchers suggest, could partially account for the failure of crystallography despite extensive efforts: the lipophlic molecules can bind in a variety of conformations.

Some have argued that enthalpic binders should be prioritized, but this study illustrates one of several problems: even if you start with an enthalpic binder, there’s no guarantee it will stay that way during optimization.

This is a nice paper, but I do wonder how much affinity there is to be had at this site on RAD51. Given the micromolar affinity of the natural peptides, nanomolar small-molecule inhibitors may not be possible. Then again, like other difficult PPIs such as MCL-1, perhaps the right molecule just hasn’t been made. How long – and how hard – should you try?
Posted by Dan Erlanson at 6:08 AM

"Given the micromolar affinity of the natural peptides, nanomolar small-molecule inhibitors may not be possible."

True, though ATP typically binds in a nice, large, pocket; the pocket here is quite a bit smaller. Again, not to say it won't be possible, just that we don't have evidence that it will be.