Last week we highlighted a paper from Chris Johnson and collaborators at Astex and Janssen in which they used fragment-growing to develop a selective inhibitor of maternal embryonic leucine zipper kinase (MELK). The paper immediately following in ACS Med. Chem. Lett. also describes the team’s efforts to discover MELK inhibitors, but using a very different approach.

In fact, the second paper doesn’t really start from fragments. The researchers were interested in designing compounds that bind MELK in a particular fashion: type II inhibitors fit into the hinge region but also insert themselves deep into a back pocket which is accessible when the so-called DFG-loop swings open (DFG-out). Since Type II inhibitors make more interactions with the kinase, they have the potential to be more selective.

The problem was that all previous crystal structures of MELK were “DFG-in”, so the researchers couldn’t use crystal soaking. Instead, they turned to structure-based design for molecules that would be able to span the hinge region and the back pocket. Happily, they succeeded with compound 2, and further optimization led to the low nanomolar compound 7. Co-crystallization experiments using a related molecule revealed that the compound binds as expected with MELK in the DFG-out conformation. 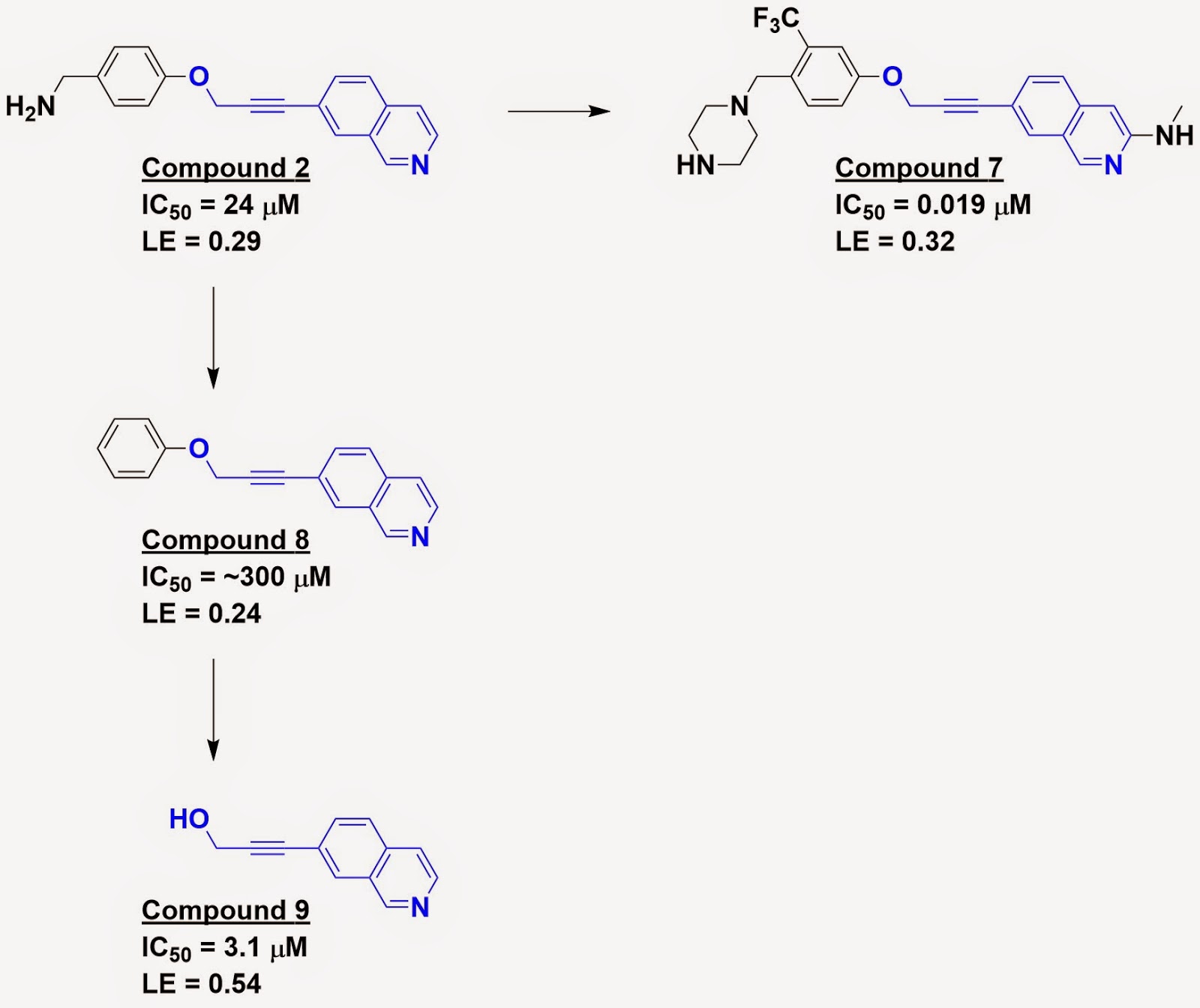 Compound 7 was tested in a panel of 243 kinases and inhibited 31 of them >50% at 1 µM; besides MELK, six other kinases were inhibited with IC50 values < 100 nM. This isn’t terrible, but it is far from the selectivity seen with MELK-T1, the Type I inhibitor discussed last week. Thus, one can’t assume that Type II binders will necessarily be more selective than Type I binders.

Fragments enter the picture at the very end of the paper, when the researchers “deconstructed” their molecules. Simply removing the aminomethyl group from compound 2 to give compound 8 reduced affinity by more than ten-fold. This was expected because crystallography had already revealed that this moiety makes electrostatic interactions with aspartate and glutamate residues in the protein.

More surprisingly, removing the phenyl group from compound 8 produced a molecule with greater affinity and ligand efficiency than the initial compound 2! The researchers determined the crystal structure of this (compound 9) bound to MELK and found that, in contrast to the other molecules, it binds in the DFG-in conformation. The isoquinoline hinge binder actually binds in a similar manner as it does for its DFG-out binding cousins, it’s just the back pocket that is cut off. The researchers speculate that the DFG-in conformation of the protein may be lower energy, giving the edge to compounds that bind to this state. Whether or not this is the case, it is certainly another reminder of the remarkable plasticity of proteins.
Posted by Dan Erlanson at 8:32 AM

Well . . .
From a "ligand design" perspective, this is interesting.

From a "drug design" perspective, this is kind of a mess.

An arylpropargyl ether as a key design construct? With a benzyl piperazine to boot?