As we recently noted, there are hundreds of human kinases in the human genome, and figuring out what they do is not easy. Selective small molecule inhibitors can probe an uncharacterized kinase’s function, but these don’t exist for the majority of proteins. Such was the case for maternal embryonic leucine zipper kinase (MELK), a potential anti-cancer target. In a recent paper in ACS Med. Chem. Lett., Chris Johnson and collaborators at Astex and Janssen describe how they created one.

The researchers started with a screen of the ~1500 Astex fragment library using both ligand-observed NMR and protein thermal shift assays. Hits were soaked into crystals of MELK, resulting in “a large number” of structures of fragments bound to the hinge-binding region. It is certainly possible to develop selective inhibitors that bind to the hinge region, but doing so is seldom straightforward, and thus the researchers were particularly interested in unusual fragments. Compound 1 caught their attention because it makes just a single hydrogen bond with the hinge region via the carbonyl oxygen in the fragment; most other hinge binders form two or three hydrogen bonds. 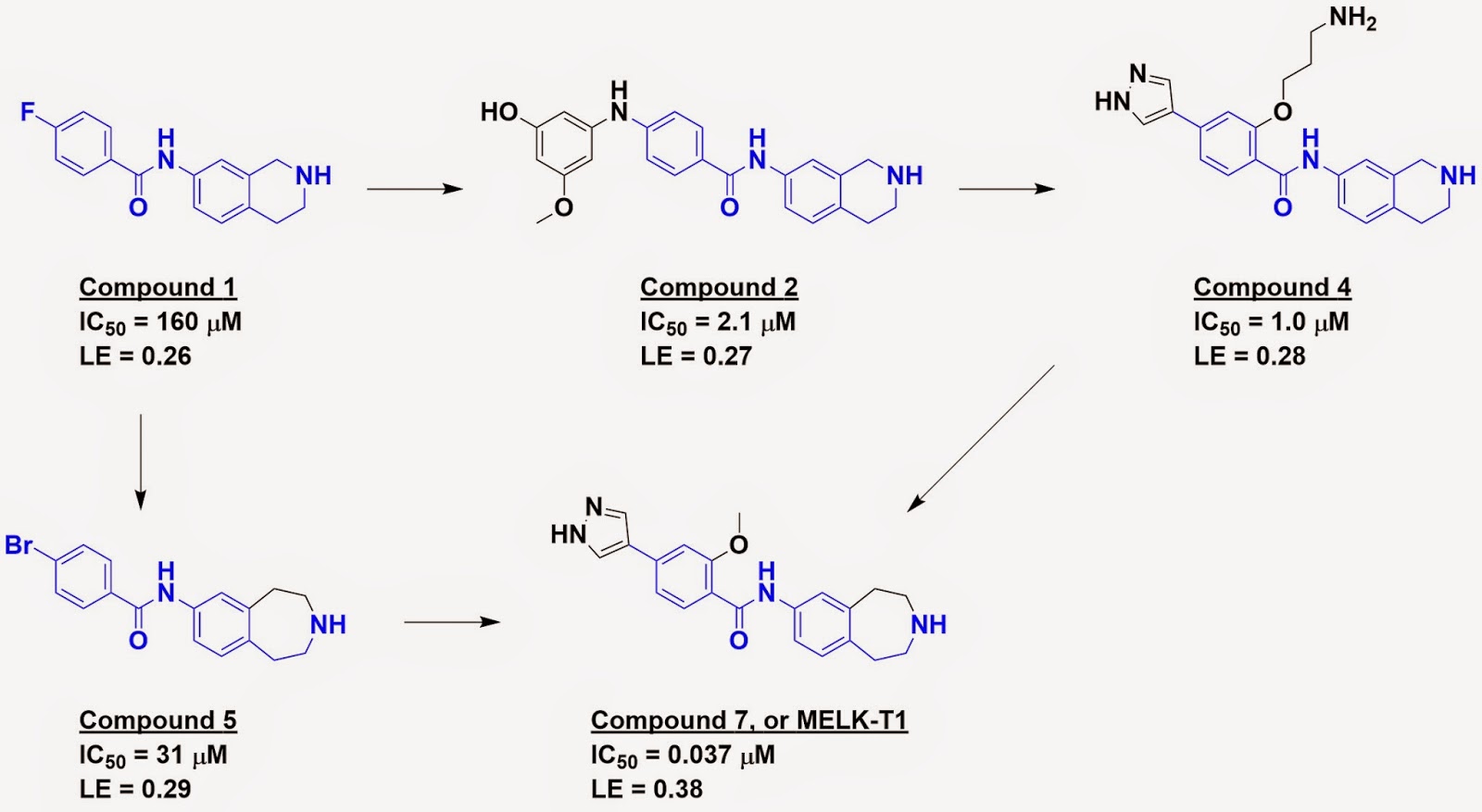 Compound 1 was well-positioned for fragment growing, and the addition of a phenol moiety (compound 2) led to a nice boost in potency and maintenance of ligand efficiency. Crystallography revealed that the phenolic oxygen was both a hydrogen bond donor as well as an acceptor, and replacing this moiety with a pyrazole led to compound 4, with slightly better potency. Pyrazoles themselves are often hinge binders (two of Astex’s clinical compounds, AT9283 and AT7519, contain them), but crystallography revealed that the binding orientation remained the same as in the original hit.

Expanding the aliphatic ring of compound 1 by one methylene gave compound 5, with a higher affinity and a slightly better fit to the protein, and adding bits from compound 4 gave mid-nanomolar compound 7, or MELK-T1. Impressively, the researchers improved the ligand efficiency of their molecules even as they became larger.

Finally, the moment of truth: would optimizing a fragment with an unusual hinge-binder lead to a selective inhibitor? The researchers tested MELK-T1 in a panel of 235 kinases, and happily only 6 were inhibited >50% at 1 µM [compound]. Notably, these did not include AMPK, which has 60% identity to MELK in the kinase domain. MELK-T1 was also cell-permeable.

This is a classic example of FBLD enabled by a robust protein construct suitable for crystal soaking. Getting to MELK-T1 required the synthesis of only ~35 compounds, and should lead to some interesting biology. At the same time, the researchers took a different approach to come up with another series of leads, which will be the subject of my next post.
Posted by Dan Erlanson at 5:50 AM

It is a nice piece of work and thanks for publishing. Given what the folks at Astex have been saying recently about their fragment library trending towards lower heavy atom counts and reduced complexity compound 1 stands out as being right up there with a 20 heavy atom count and two distinct pharmacophores.