Fragments of Life shut down LTA4H

A couple months ago we highlighted research suggesting that natural products are a fruitful field for finding fragments. One company, deCODE, has taken this idea very seriously, and has constructed their fragment library based largely on molecules (or close analogs) that actually appear in nature. Their strategy is described in detail in the most recent issue of J. Med. Chem.

The “fragments of life” (FOL) screening library consists of three sets of molecules:
This gives, in total, a 1329-fragment screening set. Naturally, given their origin, some of the fragments are slightly unusual, including the dipeptide bestatin and the trendy resveratrol. However, with the exception of a somewhat higher polar surface area, the molecules conform to rule of 3 guidelines, with an average molecular weight of 182.5 and ClogP of 0.96. All fragments are soluble up to 50 mM in methanol, and in fact stocks are made in this solvent rather than the more conventional DMSO.

The fragment library was tested against Leukotriene A4 Hydrolase (LTA4H), an enzyme with two functions: it has an aminopeptidase activity whose biological relevance is unknown, and an epoxide hydrolase activity that converts leukotriene A4 to the inflammatory leukotriene B4, which is implicated in heart disease and inflammation. Both activities map to a single active-site, a long cleft containing a catalytic zinc.

About 200 of these fragments were screened by soaking crystals of LTA4H in pools containing 8 compounds. Although all compounds in a given pool were structurally diverse, in some cases electron density was ambiguous, necessitating subsequent soaks of individual fragments to confirm hits. Ultimately 13 fragments were found to bind LTA4H, a hit rate of 6%. These fragments were tested in functional assays and found to have IC50s as good as 178 nM for bestatin, though the next best was mid-micromolar. Most of the fragments bound in the active site, although one fragment bound on the surface of the enzyme. Considerable structural data are presented in the paper, and all the structures have been deposited in the protein data bank.

Based on the crystal structures available, some of the fragments were elaborated to provide more potent inhibitors, increasing affinity by some four orders of magnitude, as well as improving ligand efficiency (see figure). Crystallography revealed that these more potent compounds bind in a similar fashion to the fragments. 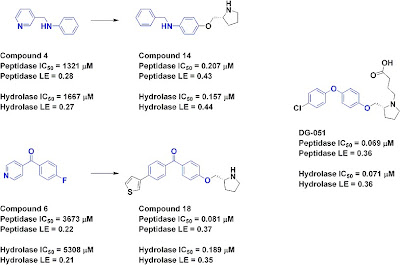 Compounds 14 and 18 also bind in a similar manner to DG-051, which has recently completed phase IIa clinical trials. There is apparently another manuscript in the works focused exclusively on this molecule. We look forward to reading the full story.
Posted by Dan Erlanson at 4:40 PM