Proving again that Hsp90 is tailor-made for fragment-based approaches, the latest issue of J. Med. Chem. has a thorough article describing the development of an anti-cancer candidate targeting this protein. The researchers, mostly from Vernalis but also from Novartis and the Institute of Cancer Research, used a combination of fragment-based methods, computational screening, and medicinal chemistry. This is likely to be representative of a coming wave of reports in which a fragment approach supplements other techniques (or vice versa).

The fragment effort started with a library of fragments grouped into pools of 10-12 each and screened using three different NMR methods (saturation transfer difference, water-LOGSY, and T2 relaxation filtered 1D). Compounds were tested in the presence and absence of PU3, a compound known to bind to the ATP site of Hsp90. Of the 1351 fragments tested, 59 of them (4.4%) were confirmed in all three NMR experiments and competed with PU3. Interestingly, a further 158 compounds were found to bind to Hsp90 but could not be displaced by PU3, suggesting that they bind outside of the ATP binding site; these were not pursued.

Two of the fragments identified, along with their IC50s in a fluorescence polarization (FP) assay, are 10 and 11 (see figure – click to see larger image). These fragments were also characterized crystallographically. An interesting aside is that the binding mode of fragment 10 differed depending on whether it was soaked into Hsp90 crystals or co-crystallized with the protein. (This is reminiscent of the different binding modes, both productive, observed for two fragments using crystallography versus NMR on Hsp90 by researchers at Abbott.)

In addition to the fragment work on Hsp90, a virtual screen of 700,000 (non-fragment) compounds was conducted, leading to the purchase of 719 commercially available molecules that were tested in the FP assay. Two hits, 12 and 13, are shown in the figure and were also characterized crystallographically. 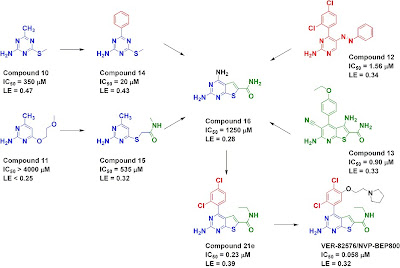 With these SAR and X-ray crystal structures in hand, the researchers added elements from the larger compounds (a phenyl from 12 and 13 or the amide from 13) to their fragments to generate the more potent fragments 14 and 15. Further structural examination led to the 2-amino-thienopyrimidine scaffold 16, which formed the basis for subsequent optimization.

Appending a phenyl group onto compound 16 led to the expected boost in potency, with the dichloro compound 21e having good biochemical as well as cell-based activity. Addition of a solubilizing group led ultimately to NVP-BEP800/VER-82576, which, in addition to potent biochemical and cell activity, also showed tumor regression in mice following once-daily oral dosing, along with pharmacodynamic biomarkers consistent with Hsp90 inhibition. This compound also showed good antiproliferative effects in a number of human cancer cell lines. Crystallographic characterization revealed that the molecule binds in a manner consistent with the previous structures (and with the co-crystallized structure of fragment 10).

This could be seen as a nice example of what has been dubbed fragment-assisted drug discovery: fragments were not the sole drivers of the project, but they did play an important role in guiding the overall strategy to develop optimal molecules.

In related news, Vernalis just announced a multimillion dollar collaboration with GlaxoSmithKline around an undisclosed cancer target – another indication that fragment-based approaches have not just scientific value, but monetary value as well.
Posted by Dan Erlanson at 10:48 AM