Our most recent poll has just closed, and the results provide a snapshot of fragment libraries in 2018.

The first two questions asked about the smallest and largest fragments (in terms of non-hydrogen or heavy atoms) you would include in your library. As shown below, the median lower bound is 7-8 heavy atoms, while the median upper bound is 17-18 heavy atoms. This is comparable to what we saw when we last asked these questions five or six years ago.

The third question asked how many fragments people have in their libraries, and more than 40% of the 99 respondents answered 1001-2000. 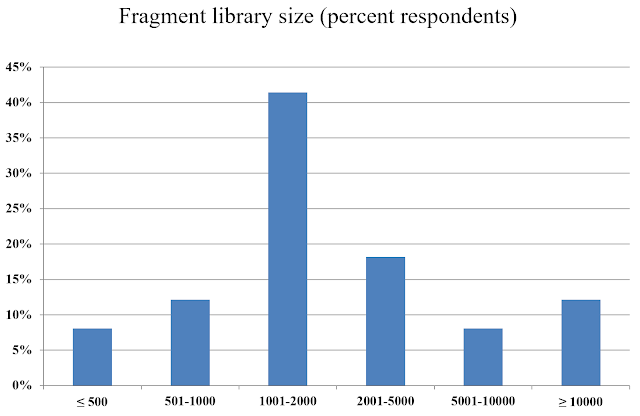 The distribution is similar to the results from four years ago when we last asked this question. Notably though, the number of respondents with very large libraries has more than doubled, admittedly from a small base.

Overall then this poll could probably be summarized as, “plus ça change.” Or, as the growing number of clinical success stories attests, if it ain’t broke, don’t fix it!
Posted by Dan Erlanson at 4:18 AM