Poll results: what structural information is needed to optimize fragments

Our latest poll asked “how much structural information do you need to begin optimizing a fragment?” Over the past few weeks we received 143 responses, and the results are shown here. 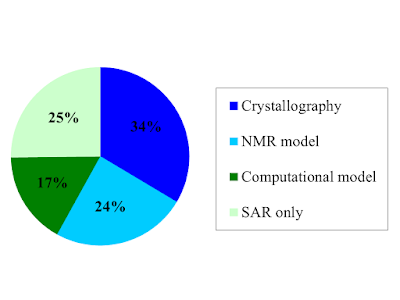 Just over a third of you said that you wouldn’t work on a project without a crystal structure, while nearly a quarter said you’d settle for an NMR-based model. In other words, more than half of you demanded fairly detailed structural data to embark on a fragment optimization campaign.

But consistent with continuing improvements in modeling, almost a fifth said that a computational model would be just fine.

And perhaps most surprisingly, fully one quarter of you said that SAR alone would be sufficient to begin optimizing a fragment. Presumably this is driven at least somewhat by internal successes, and I look forward to seeing these disclosed in meetings and publications.

All of these approaches are rapidly developing, and it will be fun to revisit this poll in a few years to see whether crystallography maintains its lead, or whether lower resolution methods gain dominance.

In the meantime, are there other topics you’d like to see polled?
Posted by Dan Erlanson at 9:41 AM

How about before hit optimization?

This might have been polled, but I'd like to see how people stick to the so-called "rule-of-three" when assembling fragments for their library.

Practically, would you also start with fragments with sub-optimal aqueous solubility? This may depend on the size of the fragment, but I found for smaller fragments (MW ~ 200 or less), a solubility of 1 mM (with 1% DMSO in PBS) is usually not sufficient for functional assays since they often bind very weakly to the target.