The latest poll has just closed, and the results are quite interesting – I’ll get to these in the next paragraph. First, a quick note on methodology. The poll ran from August 27 through September 30. Due to issues with polling in Blogger, we began running polls in Polldaddy in 2013; its interface gives the total number of votes for a question but not the number of individual respondents. Thus, for the questions on metrics and methods, I assumed that the number of respondents was equal to the number of people who identified themselves as practicing FBLD in the first question, or 123 out of a total of 154. The true percentages for the metrics and methods that people use could be higher or lower if not everyone answered all the questions.

Readership demographics have been remarkably stable since 2010 and 2013, with just over half of respondents from industry, and around 80% of all respondents actively practicing FBLD.

The next question asked about screening methods, and here things get more interesting. 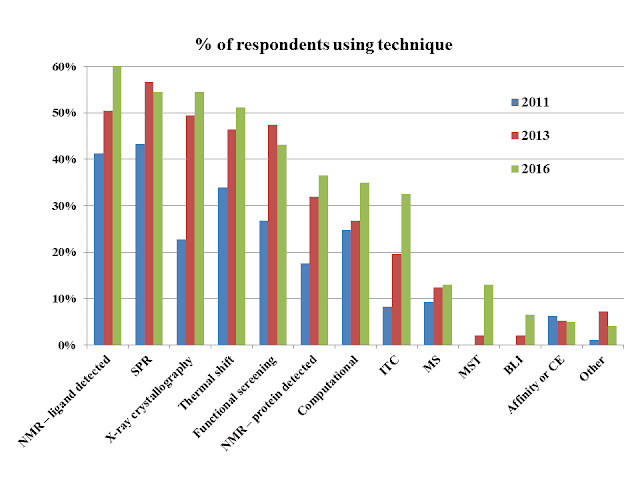 The first thing to notice is that, as we also saw in 2013, nearly all fragment-finding techniques are being used more, with the average user employing 4.1 distinct methods today compared with 3.6 in 2013 and 2.4 in 2011. Ligand-detected NMR has jumped to first place in terms of popularity, with SPR and X-ray crystallography tied for second, followed closely by thermal shift. MST, while still in the minority, has had the largest percentage increase. The use of crystallography has certainly jumped since 2011, which fits with recent publications.

Finally, with regards to metrics, ligand efficiency (LE) continues to dominate, followed by LLE (or LipE), though overall usage of both is down compared with 2014. Only one of the other metrics broke the 10% mark. 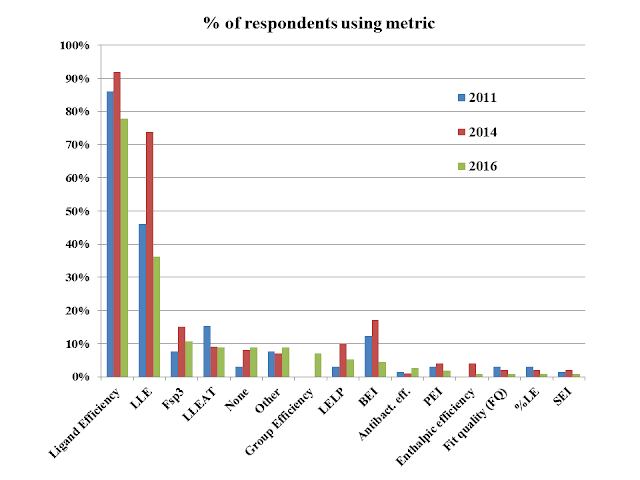 Again, if some practitioners answered the first question of the poll, but not the next two, the use of all methods and metrics could be underestimated. Still, these results seem to fit with what I’ve heard talking with folks – any surprises?
Posted by Dan Erlanson at 6:04 AM