Methionine aminopeptidases, or MetAPs, cleave the N-terminal methionine residue from newly translated proteins. The human enzyme MetAP2 is a potential target for obesity, as demonstrated by the impressive clinical results of beloranib. But this drug hasn't been approved, and patients have died while taking it. Beloranib is an irreversible inhibitor that may also hit other targets, so researchers at Takeda California have been seeking non-covalent inhibitors. They report their results in two recent papers in Bioorg. Med. Chem. Lett.

In the first paper, Zacharia Cheruvallath and colleagues describe a biochemical fragment screen of ~5000 fragments (11-19 non-hydrogen atoms) conducted at 0.1 mM. This produced an impressive number of hits (110 compounds with > 20 % inhibition), which were triaged based on both ligand efficiency and LLE, ultimately yielding 16 interesting fragments. In particular, fragment 6 is remarkably potent. 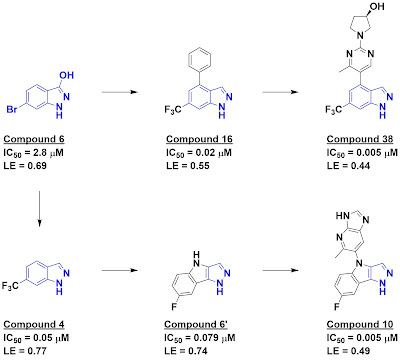 Crystallography was not successful for any of the fragments. Undeterred, the researchers performed classic “SAR by catalog” (and corporate collection) to develop a binding model. This quickly revealed that the hydroxyl group was unnecessary. It also suggested that one of the indazole nitrogen atoms might be interacting with an active site metal ion, and that the bromine might be pointing towards a hydrophobic pocket where the side chain of the methionine substrate normally binds. Growing led to compound 16, and a closely related compound was characterized crystallographically bound to the protein, confirming the model. Further optimization led to compound 38, with low nanomolar potency in both biochemical and cell-based assays, excellent selectivity against a panel of >100 other targets, good oral bioavailability, and reasonable pharmacokinetics. This compound caused dose-dependent weight loss in a mouse model of obesity.

The second paper, by Christopher McBride and colleagues, involved more dramatic changes to the fragment. The indazole 4 is very potent, but indazoles are quite common in the literature, so the researchers sought to scaffold-hop to a novel core. This led them to design compound 6’, and using some of the SAR from the previous series ultimately led to compound 10. As with compound 38 above, this compound showed good cell-based activity, acceptable pharmacokinetics, oral bioavailability, and a clean profile against > 100 off-targets at 10 µM. It also showed measurable weight loss in a rodent model of obesity.

The question sometimes arises as to how many fragment hits are necessary for a program to move forward. These two papers show that a single fragment can be elaborated to two very different lead series with animal efficacy. In contrast to some of our recent posts, these efforts did not initially require crystallography. There are many ways to advance fragments, and no single technique is essential.
Posted by Dan Erlanson at 5:03 AM