Human lipoprotein-associated phospholipase A2 (Lp-PLA2) is an enzyme involved in lipid metabolism that is implicated in multiple diseases, from atherosclerosis to Alzheimer’s. Because the natural substrates are lipophilic phospholipids, it is no surprise that reported inhibitors are also large and hydrophobic. A case in point is darapladib: with a molecular weight of 667 Da and a clogP of 8.3 this is a poster child for molecular obesity – and it also failed in phase 3 clinical trials. A new paper in J. Med. Chem. by Alison Woolford (Astex), Joseph Pero (GlaxoSmithKline) and colleagues describes an effort to discover less lipophilic inhibitors.

The researchers performed a screen of 1360 fragments using thermal shift and ligand-detected NMR and a smaller screen of 150 fragments using crystallography. This yielded 34 fragments that were ultimately characterized crystallographically; screening commercial and in-house collections for related fragments yielded another 16. Interestingly, rather than clustering at a single hot spot, these fragments bound to different regions of the extended active site, with some – such as fragment 6 – a full 13 Å from the catalytic center. This is reminiscent of a fragment campaign against soluble epoxide hydrolase, another enzyme with a long, hydrophobic active site. 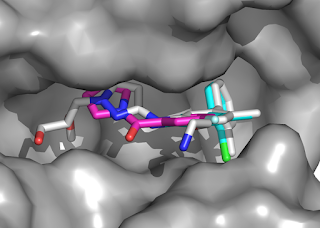 In addition to binding in an interesting site, fragment 6 also has good affinity and ligand efficiency. Moreover, its binding site overlaps partly with that of fragment 5. Thus, the researchers merged the two fragments together, resulting in compound 7, with submicromolar activity.

Further structure-guided optimization, which included growing into a polar region of the protein, ultimately led to compound 16, with low nanomolar potency.

Compound 16 has a molecular weight of 411 Da and a clogP of 3.4 and is correspondingly reasonably soluble (> 0.3 mM). Whereas darapladib showed a dramatic 700-fold potency decrease upon addition of human plasma – presumably due to nonspecific binding to other proteins – the decrease in potency for compound 16 is only 13-fold. Indeed, though darapladib is a picomolar binder, compound 16 is slightly more potent in plasma.

Unfortunately, compounds in this series turned out to have high clearance in rats, proving once again that lead optimization is often a frustrating game of whack a mole. Still, the fact that the researchers were able to develop smaller, more soluble inhibitors of an enzyme with such a lipophilic substrate gives hope that the game is perhaps winnable.
Posted by Dan Erlanson at 6:08 AM

I think that this is a great concept.

Hydrolysis by Phospholipase A2 (food grade) converts the phospholipid into a stable lysopholipid with strongly improved emulsifiying thermo stable properties. phospholipase a2