Last week saw the first-ever fragment-based symposium at Pacifichem. These are massive meetings held in Honolulu every 5 years to bring together scientists from countries surrounding the Pacific. Competing with views like this can be challenging. 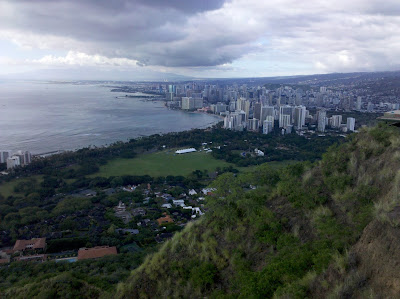 Nonetheless, Practical Fragments is happy to report that the symposium was popular, with some talks at close to standing-room-only capacity. There were over 40 presentations and posters from eight countries, and Derek Cole (Takeda) and Chris Smith (Coi) also chaired a lively round-table discussion. I’ll just try to convey a few broad themes.

The utility of “three-dimensional” fragments (as opposed to “flatter” aromatic fragments) came under fire. Jane Withka of Pfizer reported that a small library of 400 fragments, 80% of which had chiral centers, produced lower hit rates and lower confirmation rates in SPR screens than her company’s original fragment library, consistent with what Astex reported.

Another theme was decreasing the concentration at which fragments are screened. Tom Peat (CSIRO) said that even weak (1-10 mM) hits can be found by screening fragments at 100-200 µM using SPR. This seems to be something of a “sweet spot;” aggregation artifacts become significantly more problematic at higher concentrations. For native mass spectrometry, even 10 µM fragment seems to work well, though Tom has a rather impressive MS instrument. Similarly, commentator sgcox noted that DSF is best conducted below 100 µM fragment concentration.

As we noted six years ago, fluorine NMR is also ultrasensitive. Brad Jordan (Amgen) stated that he routinely detects 4-5 mM binders even when screening fragments at 20 µM. Brad also discussed an update of work we covered previously, in which a fragment-linking approach ultimately led to picomolar inhibitors of BACE1. Continuing the fluorine theme, Ray Norton (Monash Institute of Pharmaceutical Sciences, MIPS) described his group’s work with protein-observed 19F NMR. Clearly more people are catching the fluorine bug, as attested by its popularity in our recent poll.

Crystallography remains king when it works, though several speakers noted that they had obtained dozens or even hundreds of structures of their protein without capturing a bound fragment. And even successful protein-ligand structures can mislead; Carsten Detering (BioSolveIT) reported that his computational approach detected problems in about half of 107 published structures. Still, structures can be extraordinarily useful: we recently highlighted an AstraZeneca paper that released dozens of structures, and Greg Warren (OpenEye) used these to address questions about solvation. What’s more, crystallographers are looking to improve things: Janet Newman (CSIRO) highlighted an app called Cinder (“Crystallographic Tinder”) to speed up the identification of protein crystals. It’s available for Android, with an iOS version coming soon.

Of course, although the science is fun, the ultimate goals of fragment-based drug discovery are better drugs, and here too we are making progress. Jane Withka noted that several Pfizer kinase candidates had come from fragments. Tatsuya Niimi provided an overview of fragment projects at Astellas between 2009 and 2014: of 88 programs, 15 have produced compounds with IC50 values < 200 nM. Not counting projects that were dropped for strategic reasons or are still in progress, this is an overall success rate of 43%. As expected, the successful targets were computationally predicted to be more tractable than those that failed, though unexpected conformational changes or covalent approaches proved that at least one “undruggable” target may need to be reclassified.

Gianni Chessari (Astex) provided an update of their cIAP/XIAP program and revealed that ASTX660 has recently entered a phase 1-2 clinical trial for cancer. I learned of another drug that has just entered clinical trials, though as its fragment origins have not yet been disclosed I’ll defer naming it. In any case, I’m looking forward to adding several new molecules the next time I update the list of fragment-derived clinical programs.

At the other end of the clinical spectrum, Chaohong Sun (AbbVie) briefly touched on their late-stage ABT-199, which is expected to be approved in the near future. And Daniel Wyss discussed Merck’s BACE1 inhibitor MK-8931, or verubecestat (see here for a nice summary in C&EN), which is in phase 3 clinical trials for Alzheimer’s disease (AD). The results, expected in early 2017, will be either a new hope for the millions of patients with AD – and the billions of people who hope to live long enough to one day be at risk – or a colossally expensive disappointment. Either way, they will provide the best test yet of the amyloid hypothesis.

I could go on but will instead end here – just as higher fragment concentrations lead to more artifacts, more words likely lead to fewer readers. Thanks to all who presented, organized, and sponsored the symposium. If you attended, please share your thoughts!
Posted by Dan Erlanson at 6:33 AM

I enjoyed being able to hear much more about the fragment based work from the South Pacific than have been able to at other conferences. One of the most interesting reports was the work you showed being able to add 8K+ R-groups to fragments (in a single day) with no measurable affinity for hit generation.