Fragments and HTS vs BCATm

One of the themes throughout this blog is that fragments are useful not just in and of themselves, but as part of a broader tool kit, what Mark Whittaker referred to as fragment-assisted drug discovery, or FADD. A nice example of this has just been published in J. Med. Chem. by Sophie Bertrand and colleagues at GlaxoSmithKline and the University of Strathclyde.

The researchers were interested in mitochondrial branched-chain aminotransferase (BCATm), an enzyme that transforms leucine, isoleucine, and valine into their corresponding α-keto acids. Knockout mouse studies had suggested that this might be an attractive target for obesity and dyslipidemia, but there’s nothing like a chemical probe to really (in)validate a target. To find one, the researchers performed both fragment and high-throughput screens (HTS).

The full results from the fragment screen have not yet been published, but the current paper notes that the researchers screened 1056 fragments using biochemical, STD-NMR, and thermal shift assays. Compound 1 came up as a hit in all three assays, and despite modest potency and ligand efficiency, it did have impressive LLEAT. The researchers were unable to determine a crystal structure of this fragment bound to the protein, but STD-NMR screens of related fragments yielded very similar hits that could be successfully soaked into crystals of BCATm. 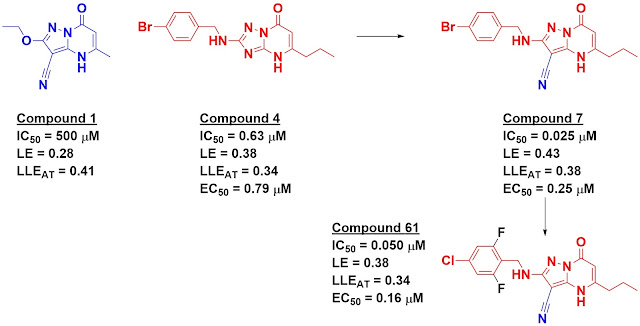 The HTS also produced hits, notably compound 4, which is clearly similar to compound 1. In addition to its increased biochemical potency, it also displayed good cell activity. Moreover, a crystal structure revealed that the bromobenzyl substituent bound in an induced pocket that did not appear in the structure with the fragment, or indeed in any other structures of BCATm.

The researchers merged the fragment hits with the HTS hits to get molecules such as compound 7, with a satisfying boost in potency. Interestingly, the fragment-derived core consistently gave a roughly 10-fold boost in potency compared to the triazolo compounds from HTS. Comparison of crystal structures suggested that this was due to the displacement of a high-energy water molecule by the nitrile.

Extensive SAR studies revealed that the propyl group could be extended slightly but most other changes at that position were deleterious. The bromobenzyl substituent was more tolerant of substitutions, including an aliphatic replacement, though this abolished cell activity. Compound 61 turned out to be among the best molecules in terms of potency and pharmaceutical properties, including an impressive 100% oral bioavailability and a 9.2 hour half-life in mice. Moreover, this compound led to higher levels of leucine, isoleucine, and valine when mice were fed these amino acids.

This is a lovely case study of using information from a variety of sources to enable medicinal chemistry. Like other examples of FADD, one could argue as to whether the final molecule would have been discovered without the fragment information, but it probably at least accelerated the process. More importantly, molecules such as compound 61 will help to answer the question of whether BCATm will be a viable drug target.
Posted by Dan Erlanson at 6:19 AM