Of all the ways to find fragments, one of the more unusual is substrate activity screening, or SAS, which we first discussed here. The idea is to make and screen libraries of potential enzyme substrates and transform the best ones into inhibitors. In a new paper in J. Am. Chem. Soc., Jon Ellman and coworkers at Yale University describe how they used SAS to discover irreversible inhibitors of protein arginine deiminase 3 (PAD3), a potential target for neurodegenerative diseases.

The four human PADs (conveniently named PAD1-4) transform arginine residues in proteins to citrulline residues, with subtypes distributed differently across different tissues. The researchers started by making a library of more than 200 fragment-sized guanidines (the unique side-chain moiety in arginine) as potential substrates. These were then screened in a colorimetric assay. Several compounds were found to be processed by the enzyme, though all were very weak substrates (Km > 10 mM).

Next, the best substrates from three different chemical series were optimized for activity. For example, substrate 4a was grown to substrate 15a. 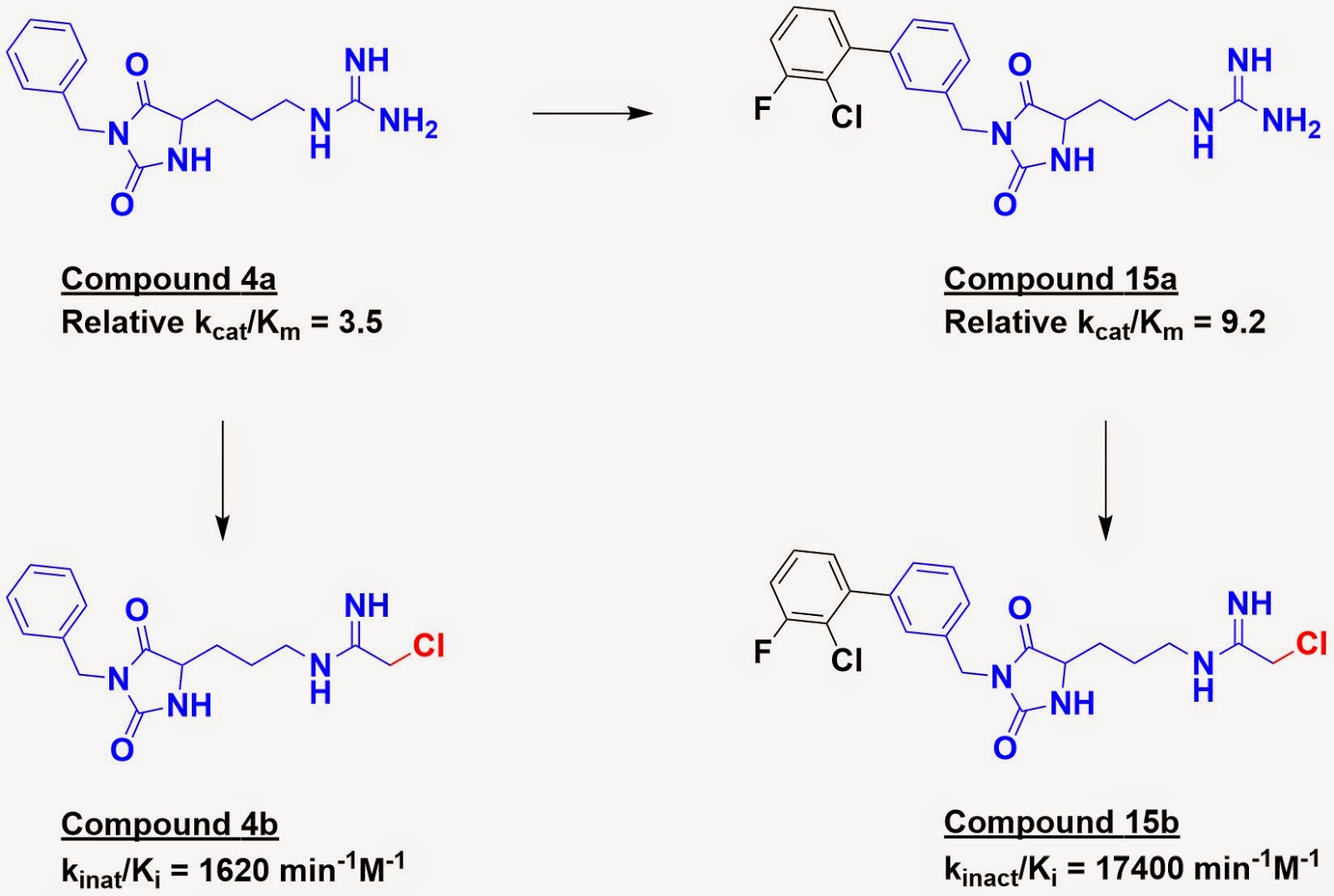 Finally, the substrates were converted to irreversible inhibitors by replacing the guanidine with a known chloroacetamide warhead. This coopts the natural mechanism of the enzyme, which relies on covalent bond formation between an active-site cysteine residue and the substrate. Within a given series, the better the substrate, the better the resulting inhibitor (for example, inhibitor 15b is more potent than inhibitor 4b). However, these correlations did not hold across series.

The best compounds were also tested for selectivity, and some of them were at least 10-fold selective for PAD3 over the other three PADs.

Last year we highlighted a paper that described several difficulties encountered (and overcome) using SAS to find inhibitors of the protease urokinase. (The comments to that post are well worth reading as they include contributions from the corresponding author of the paper as well as a former Ellman postdoc who is using SAS.) However, according to the current paper, SAS was relatively straightforward for PAD3 – another confirmation that different targets require different approaches.
Posted by Dan Erlanson at 6:12 AM