Differential scanning fluorimetry (DSF) is a hit-finding technique in which a protein is incubated with a small molecule and heated until the protein reaches its “melting temperature” and unfolds. If a small molecule binds, in theory it should stabilize the protein towards thermal denaturation and thus raise the melting temperature, giving a positive thermal shift. However, most folks who have performed these types of experiments have also found (and usually ignored) molecules that lower the melting temperature of the protein. In a new paper in ChemBioChem, Barry Finzel and coworkers at the University of Minnesota follow up on one of these with very interesting results.

The researchers were interested in the enzyme 7,8-diaminopelargonic acid synthase (BioA) from Mycobacterium tuberculosis, the organism that causes its eponymous disease. This enzyme – which is not found in mammals – is involved in the synthesis of the essential cofactor biotin. DSF was used to screen 1000 compounds from the Maybridge Ro3 Diversity Fragment Library at 5 mM concentration, resulting in 21 hits which changed the denaturation temperature (Tm) by more than 2 °C. A dozen of these decreased the Tm, but although all of these were taken into crystallography trials, only compound 1 yielded a structure. STD NMR was also used to confirm that the compound binds to BioA in solution.

Next, the researchers used the classic “SAR-by-catalog” approach and purchased analogs of compound 1. Compound 2 turned out to be particularly interesting: it decreased the Tm by a whopping 18 °C! Weirder still, when soaked into crystals of BioA, they turned from yellow to red.

BioA is a transaminase: it takes a nitrogen from one molecule (called SAM) and transfers it to another molecule (called KAPA). En route to its final destination, the nitrogen is transferred to a co-factor, pyridoxal phosphate (PLP), which contains an aldehyde. Compound 2 contains a hydrazine, which is known to react with aldehydes, and in fact a co-crystal structure of compound 2 bound to BioA shows that this is exactly what happens. Interestingly, compound 2 binds in a somewhat different manner than compound 1 despite their similar chemical structures.

Now you may think that hydrazines aren’t exactly drug-like, but it turns out that a commonly used drug against tuberculosis is isoniazid, which contains an analogous acyl hydrazide. The researchers found that isoniazid also decreases the Tm of BioA, though less dramatically than compound 2. Though isoniazid works through an entirely different mechanism, the researchers were able to obtain a co-crystal structure of this binding to PLP in BioA (magenta; PLP is on the left, and protein is not shown), showing that it binds differently than either compound 1 (green) or 2 (cyan). Nonetheless, it did not show any inhibition of the enzyme, demonstrating that covalent binding alone is not sufficient for disrupting enzymatic activity. 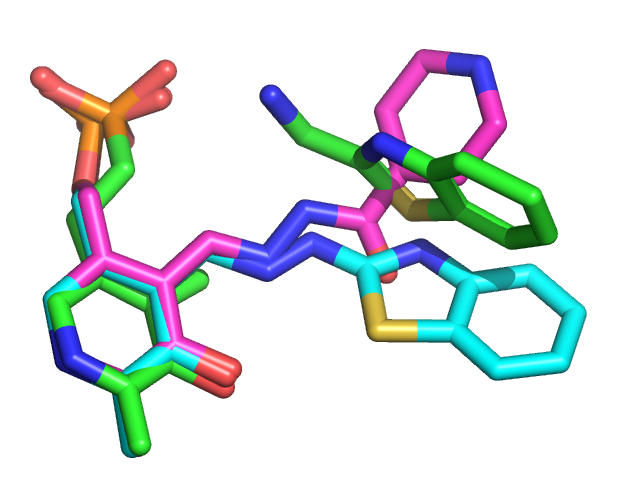 This is a very nice paper, and it will be fascinating to try to understand how the fragments so effectively destabilize the protein despite binding tightly, and how this translates into inhibition. The researchers suggest that finding ligands that destabilize proteins could be generally useful for turning off proteins. Are there other well-characterized examples out there?
Posted by Dan Erlanson at 6:44 AM

Nice Synopsis, Dan. Thanks for calling attention to this.
We original suspected that the destabilizing hits were displacing the PLP (which is wildly stabilizing), but this proved - at least in the case of compound 1 - entirely wrong